Back when I used to hang out on deviantart, I encountered a few people who were very interested in swords, but had developed a complete misunderstanding of how they work.

It’s not hard to see how this could happen: a diet of manga and samurai flicks, or Star Wars lightsabers, with no real experience with knives – you can see how one samurai can cut right through another’s blade (“ka-tingg!”) or some such, and it might become real to a person. Similarly, I once had a gamer insist to me that sniper rifles make a visible vapor trail and the shooter can see the bullet. Sazz and I [sazz] found ourselves arguing this point at length, with Sazz even saying “when I was a sniper in Vietnam, I never noticed any vapor trails and the air there’s a lot more humid, but hey…” I didn’t realize that Call of Duty (I think it was, or one of the other big first-person shooters) has visible bullet trails. I suppose if all someone knew about swords was that Hanzo Hattori swords are magic +50 vorpal blades, then they might believe you’d be able to chop the main gun off a tank if you roll double zero, or some such nonsense.

Then there was another time I got in a semi-protracted argument/discussion about the cutting ability of katana. So, I posted a picture: 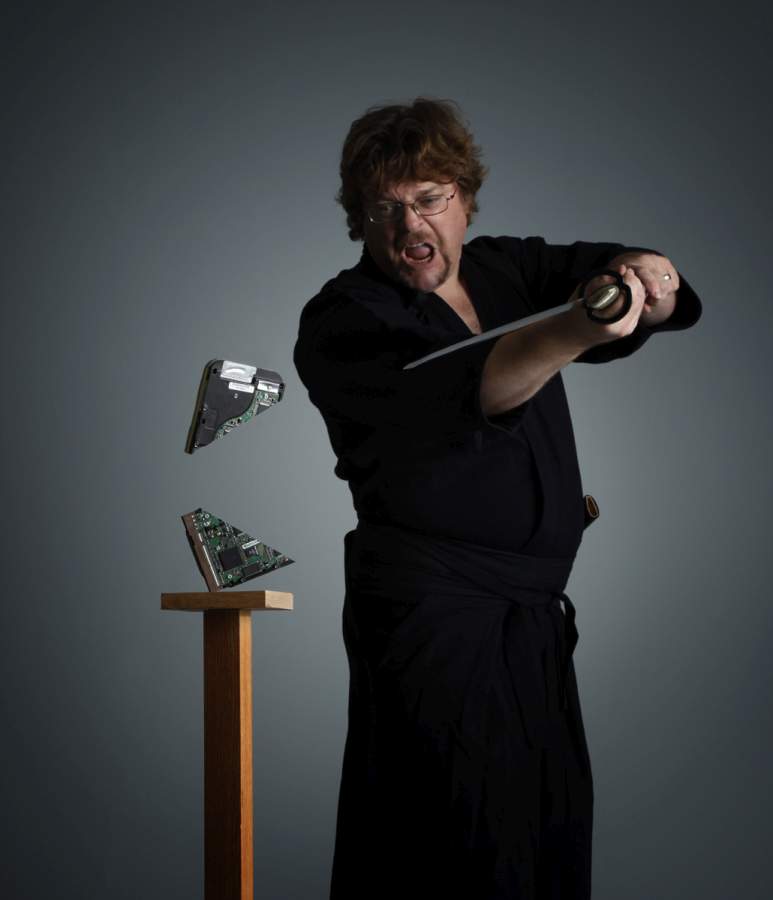 I’m still pretty happy with how that came out; I deliberately worked the motion-blur into the cut by actually doing a full speed cut just short of the very fine black thread-thin steel wires that were holding the hard drive pieces in position.

Let me tell you: sawing a hard drive in half with a table-saw is a loud, nasty, messy process. I made a custom temporary sled for the saw-top and bolted the drive down so nothing would fly around and hit anyone (like the saw operator!) which turned out to be a good idea – my cut went right through the drive’s spindle, which is a hardened piece of stainless steel. It was loud. But I got the job done.

Then I posted the second picture: 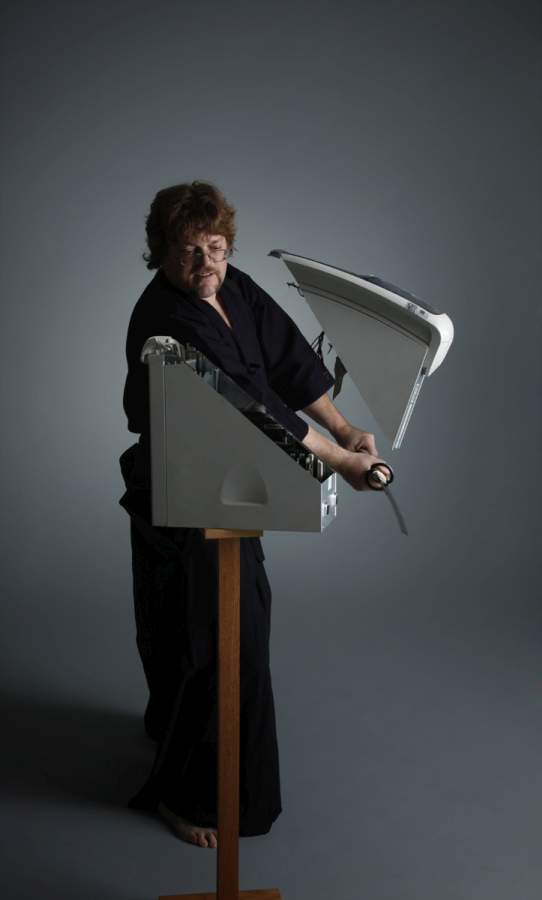 I tried to drop my shoulder into the cut, like I was really grunting a lot of power into it. I’m pretty pleased with how that one came out, too, although my expression is too inwardly-focused. But mostly, I was laughing like a maniac the whole time I was sawing a Compaq Presario in half with my table-saw. (It was a very old, non-functional system a friend had given me so I could wipe the hard drive; it was also the source of the drive in the first photo)