The US is going to pull out of the Reagan/Gorbachev agreements restricting nuclear weapons. The story is that it’s because the Russians are cheating.

That’s probably true. But if you asked the Russians they’d say it’s because the Americans are cheating, which is also true. It’s complicated; the US adopted a strategy of “modernizing” warheads to make them more accurate (i.e.: making new warheads) while keeping the overall inventory number the same. The Russians went “we, too, can play that” and did likewise – just as everyone familiar with nuclear weapons control expected. Here’s a picture of what the global nuclear threat looks like: 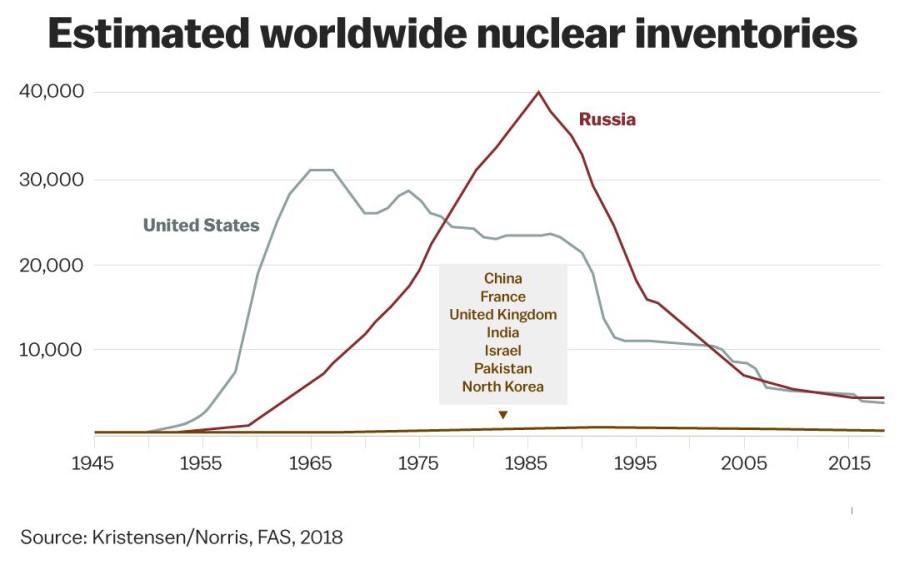 Let me interpret that chart for you: Other than the US and Russia, the other nuclear powers in the world have settled down with a policy of having enough of the weapons to deter anyone threatening an attack. Only the US and Russia have decided that it is not enough to defend; they must be prepared to scour the entire planet. I.e.: their arsenals are oriented toward aggression, not defense. A country that wanted a credible deterrent would not be concerned with (as the US is) building nuclear weapons that are precise enough to target individual bunkers or facilities.

The US got some coached yappings from one of its lapdogs: [guard]

Britain stands “absolutely resolute” with the United States, the UK defence secretary, Gavin Williamson, has said, after Donald Trump’s announcement he would pull out of a decades-old nuclear weapons pact with Russia.

Williamson blamed Russia for endangering the Intermediate-Range Nuclear Forces (INF) treaty, which was agreed by the US and the Soviet Union in 1987, and called on the Kremlin to “get its house in order”.

See? Irony is not dead. A nobody from the country that cooked up ‘BREXIT’ is standing by gag-President Trump and telling the Kremlin to “get its house in order.”

Trump did not detail any recent violations of the pact, although in 2017 White House national security officials said Russia had deployed a cruise missile in violation of the treaty.

The argument there is that the “new” Russian cruise missile is a “new” weapon, not like our new weapons are “new.” I doubt any of this is within Trump’s comprehension, he’s probably shambling along while his keepers tell him what to pretend to care about.

Think for a few minutes about the balancing-act that is nuclear war. The only reason to have a large arsenal is in hopes of being able to strike an opponent so thoroughly, with so much overkill, that they are unable to retaliate. The only reason to have a large arsenal is if you want to be prepared to be the aggressor in a nuclear war, and you want to win. If you’re trying to deter another power from using nuclear weapons on you, you need a few warheads and robust well-hidden and defensible delivery systems. A small country with 3 ballistic missile submarines, or some ground-based cruise missiles, could make a superpower uncertain of their ability to completely disarm them in a counter-force strike. Those more precise weapons that the US is building? Those are to strike an opponent’s missile silos to put them out of action in an attack. Those upgraded cruise missiles that the Russians are building? They’re also a first-strike weapon. Retaliatory weapons just need to hit a large area target like Los Angeles or Moscow, not a buried missile silo that would alread be empty, in a defensive war.

None of this should be a surprise for anyone, but I see it as another key indicator that the US Empire is coming out of its stealth period and preparing to hoist the banner of global hegemony.