Whenever I drive down to Dulles Airport (IAD) outside of Washington, I go over the Potomac near Point of Rocks, which is just outside of Harpers’ Ferry. Perhaps those names don’t ring bells, but it was a place of some historical importance in 1859.

John Brown, attempting to kickstart an insurgency of black slaves against slave-owners, came up with a scheme to attack and pillage a federal armory in Harpers Ferry. He and 21 other men wound up cornered in the arsenal, surrounded by militia, and then-president James Buchanan ordered a unit of marines (including Robert E. Lee and J.E.B. Stuart) to overrun the place. 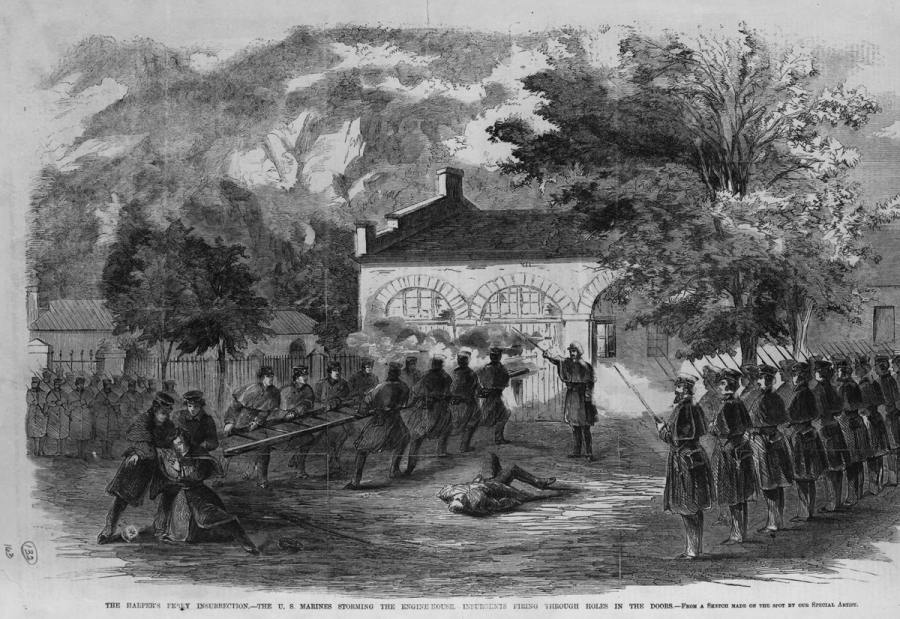 Brown was an interesting character – to say the least. He initially garnered some fame for murdering slave-holders in Kansas. Basically, he was what we’d today call a terrorist and a war criminal. So they hanged him.

“His methods were … unsound” as they said in Apocalypse Now. His actions and his death became another part of the legends surrounding the causes of the civil war; to the north he was a fire-and-brimstone (and grape-shot) reformer, and to the south he was a symbol of northern aggression. I just see him as another bad strategist; he was so consumed with passion that he got lost in fantasies that were not realistic. His venture would have been silly except it got people killed. 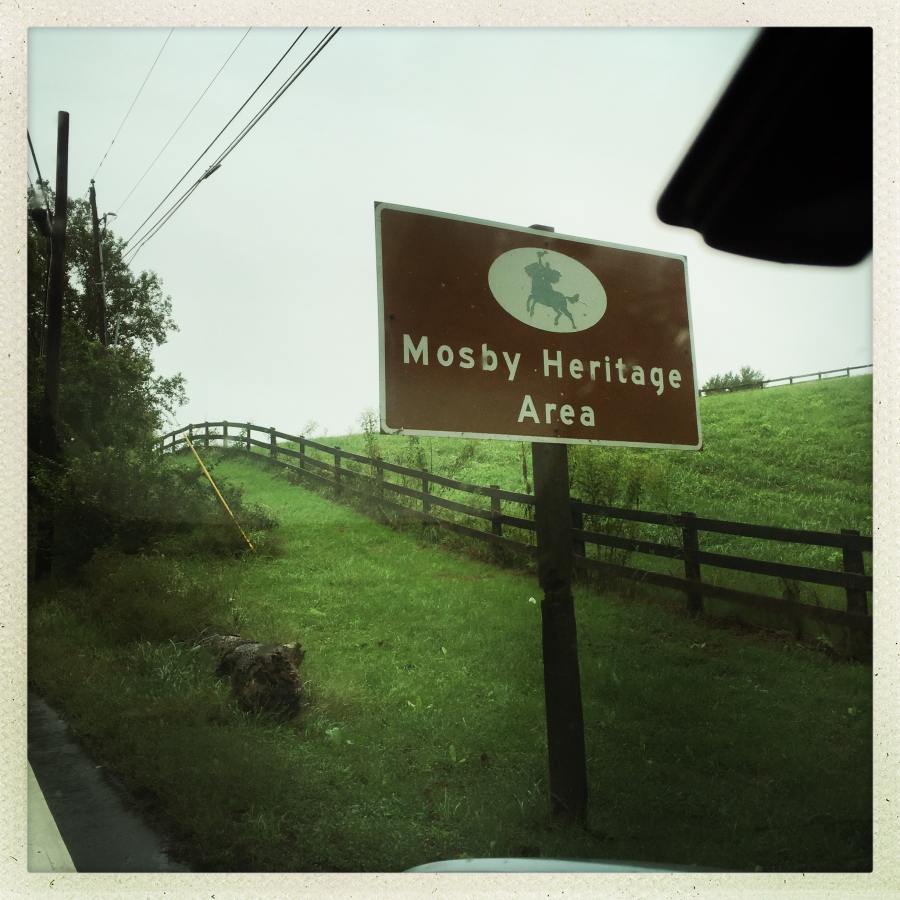 I wonder what message this sign is intended to convey.

It’s on Rt15 north of Lucketts and about 3 miles south of the bridge across the Potomac, near where Brown’s insurgency failed. Mosby. I wonder if whoever put this up somehow felt that a sign lauding Mosby was somehow a counter-balance to John Brown. I wonder, but I really don’t care much.

By the way, you can see indications that someone has already taken a saw to the sign-post if you look about 1 meter/yard up from the ground. I don’t think merely sawing down the sign sends the right message.

Mosby – commander of “Mosby’s Raiders” – is sometimes promoted as a heroic figure by southerners. Usually, by southerners who are ignorant about military history or the civil war. If John Brown’s methods were “unsound”, Mosby was Col Kurtz. If you dig around, you’ll mostly find sanitized versions of the romantically-titled “Mosby’s Raiders.” [wik] Officially the 43rd Battalion of Virginia Cavalry. Basically, a bunch of thugs and yahoos who slipped in and out of uniform as convenient – “irregular troops” – what, today, we’d call ‘insurgents’ or ‘terrorists.’ Per Wikipedia:

Speed, surprise and shock were the true secret of the success of Mosby’s command. A small, intrepid mounted force could charge a much larger one, and with the terrorizing advantage of surprise, rout them. If attacked themselves, the guerrillas would sometimes ride away a brief distance and then round on their attackers and charge back into them, panicking and scattering them in the melee. Or they would simply “skedaddle”, that is scatter to the four winds, and individually make their way back to the farms in Loudon and Fauquier counties where they were welcomed, hidden, and succoured. Mosby would then send word telling chosen men when and where to assemble for the next raid.

Such is the glory of the lost cause, and the nobility of southern arms.

Insurgents do have a role in warfare. Their job is to make noise and distract the quality troops by attacking supply chains, support infrastructure, and garrison areas. Often, that amounts to attacking civilians – when you blow up a railroad track, you’re not engaging in combat, you’re just murdering people. When you “skeddadle” and blend into a civilian population you’re not a soldier, you’re using the civilian population as human shields.

I wonder why someone put up a sign to Mosby, perhaps as a counterweight to John Brown, who did stare real soldiers in the face, and who did not “skeddadle.” Clearly, there are still southerners who want to keep rewriting the history of the civil war (which was a frightful bodge as wars go) by trying to polish semi-competent turds like Mosby into nuggets of glory. No doubt they want to remember history. Presumably they’ll put up some statues to nameless Taliban insurgents, next.

Fact #9: A cavern just outside Harper’s Ferry served as a hiding place for Confederate guerrilla raiders throughout the war.

In November of 1864, in the midst of Gen. Philip Sheridan’s Shenandoah Valley campaign, Sheridan’s men became perplexed at Confederate partisan ranger Col. John Singleton Mosby’s ability to avoid detection and capture by disappearing from his pursuers. While scouting for guerrillas, a Federal cavalryman accidentally made a shocking discovery just outside Harpers Ferry when he fell through a trapdoor in the floor of a burned and abandoned building. Beneath the trapdoor lay a tunnel leading to a stairway deep underground. Returning with a scouting party, the Federals descended the staircase into a cavern that they estimated was large enough to hold three hundred horses. There was only one opening into the room, a space so narrow that only one horse could enter at a time, and only after wading through three feet of water. The entry was covered by brush and rocks, and was marked by a high cliff to mark the hideout. The room, they quickly realized, belonged to Col. Mosby and his band of rangers, allowing them to evade capture by Federal forces.

Wooden Ships: Marty Balin » « Uncommon Sense: I am Not Your Negro