On one of the knife-maker’s groups on facebook, a 13 year-old kid from New Zealand posted a picture of a knife that he made. Some of the less experienced makers made some disparaging comments about how awkward it looked, but a few of us who love Japanese blade designs and industrial processes recognized it for a work of genius. This is the young fellow’s knife: 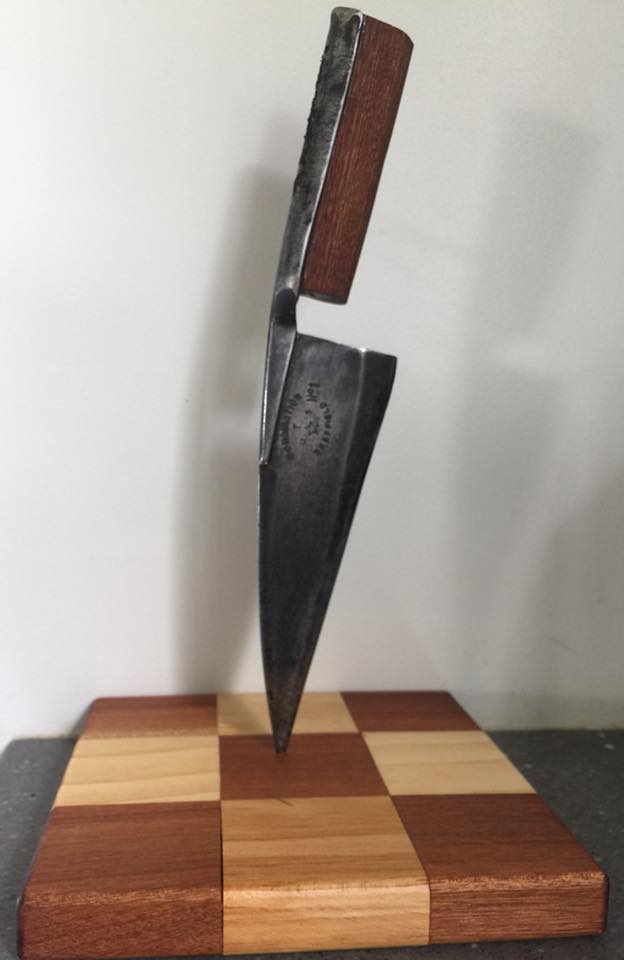 It’s half of a wool shear, fitted with a handle.

When I was a kid in the summers in the south of France, I used to watch them shear the sheep with these things. Every couple of sheep, the cutter would pass a water stone along the edges to touch it back up to razor sharp. I remember the stones were long and oblate, and they carried them in a wooden water-filled scabbard that hung from their belt. The blades’d flicker in the sunlight and the sound and the smell was … well, it was memorable, anyway. And the sheep would eventually trot away looking bare and slightly ridiculous. I remember when they switched to electric shears, which were a bit faster and used quick-change blades. Mainly, they took less skill.

When I saw his “prison shiv” knife I remembered that I had a pair of shears, myself. One of the tips was broken off about 1″ down, so I didn’t see any problem recycling it. Since I’ve got slightly better gear than the master from New Zealand, I was able to re-shape the edge a bit and did a fancier handle. Artistically, I’d say his effort was more sincere than mine. But my polish is better. I win! 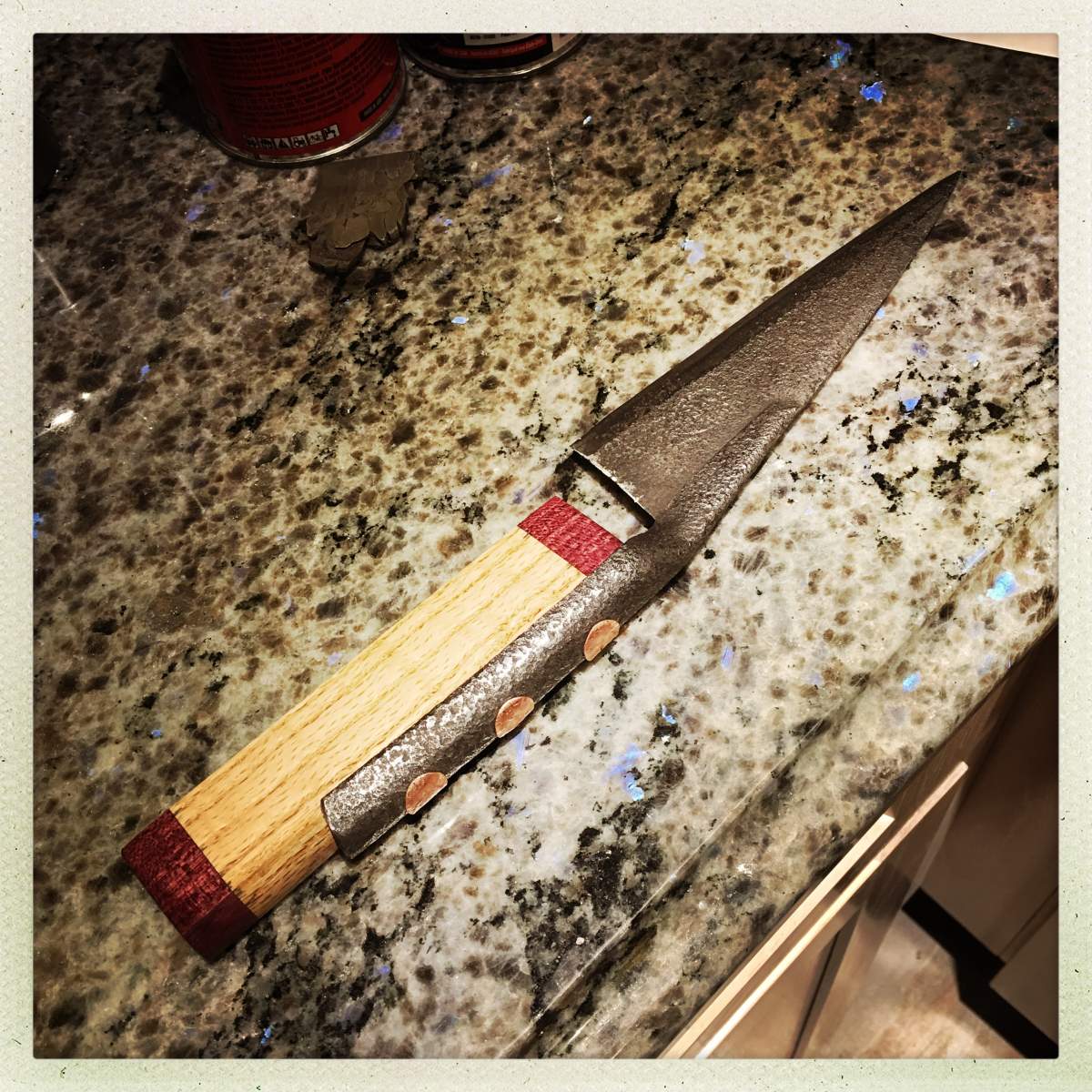 The wood is a piece of “curly” red oak that has grain that is interlocked and runs in two directions. It’s from a chunk of wood I got on Ebay in the late 90s – I’ve never seen grain like that before. I capped it with some purple heart to bring out the color of the steel, then I hit the steel with a buffer for a long time and sharpened it.

It doesn’t cut very well – the blade geometry isn’t designed for a knife – look how straight the cut-line is! But, well, it seemed like a good investment of an hour or two.

Take a moment to appreciate the simple beauty of the design of the scissors: it’s a single piece of steel that’s stamped out, presumably with a great big die. Then the piece that forms the handle is curved, and then the blades are folded perpendicular to the handle. These were easy to mass produce and I imagine that, in the heyday of the wool industry, before the electric clippers came along, they were made by the ton.

My parents doubtless have pictures of them shearing the sheep in the Aveyron in the 1960s, but I’m not going to pester them to search through their picture archive. When I was a child, my mom was always carrying around a 35mm Pentax, and recording the vanishing world – when we first visited there, the technology level was mostly early 18th century. 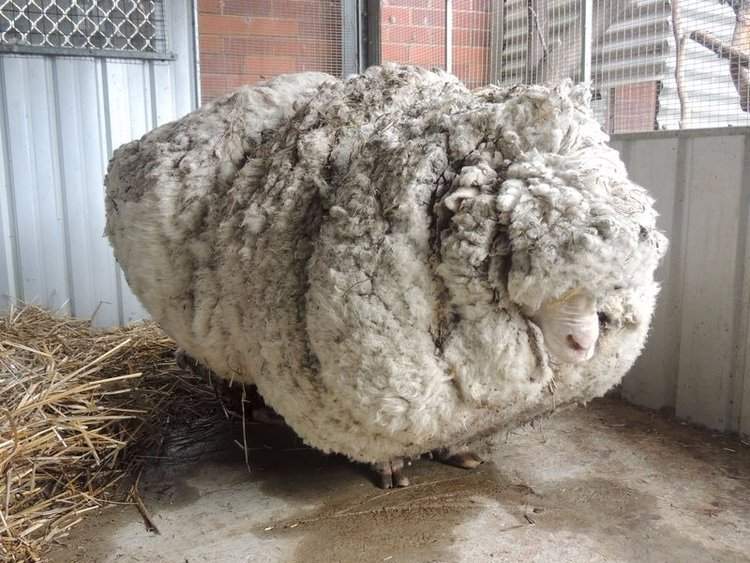 If left unshorn too long, sheep can explode. True fact.

I found that picture doing a few image searches to see if I could find pictures of a factory manufacturing the shears. I did not find any.

Here is a transitional form between the electric shear and the manual shear:

One of the things I love is the way machines evolve. I have mentioned before the Musée Des Arts Et Métiers in Paris (science and technology) – a place I used to haunt for days at a stretch, when I was a kid. Basically, my Paris routine consisted of walking across town between Les Invalides and Arts Et Métiers with a stop at La Flore En L’isle for croissants and hot chocolate – in either direction, or both. Anyhow – the museum used to do a wonderful thing: they would pick some industrial process and present room after room of miniature models of the process as it evolved. So, it might be railway brakes one time, or sheep shearing another. I used to sit and look at each version and try to figure out how the people who designed it came up with the ideas.