There are still a lot of details and I’m dealing with a block of metal at scary heat. For example, one thing I have discovered that I don’t like one bit: the handle you weld to the block comes apart at welding heat. Because the welds deform when you whack the billet.

Sit there and let the bandsaw do its thing for an hour, stack the pieces in a machinist’s vice, run some embarrassing welds down the side, soak it in kerosene as a flux, and voila! [pro tip: not to put in kerosene until MIG welds cool!] 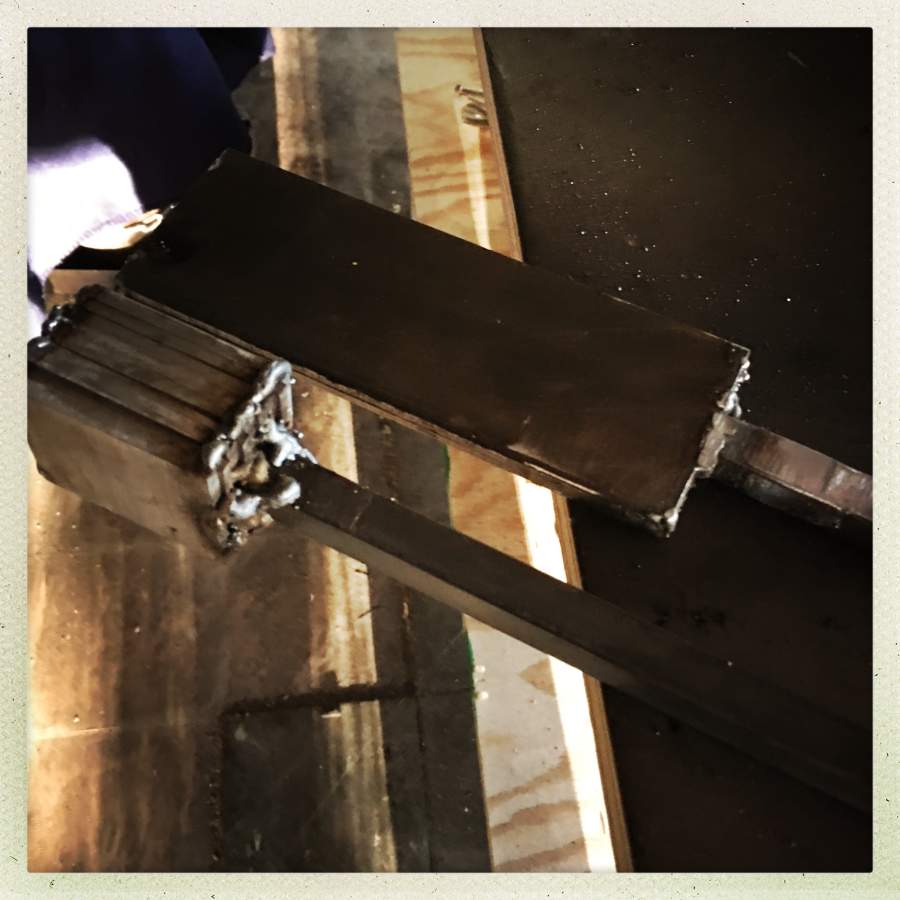 After being brought to welding temperature, I smash them together with gentle raps from the hammer. Then, I pound them sideways to see if the weld took. Once it appears that I have a single block of steel, I experiment with squishing it in the press. Will it separate, or have I achieved unification? 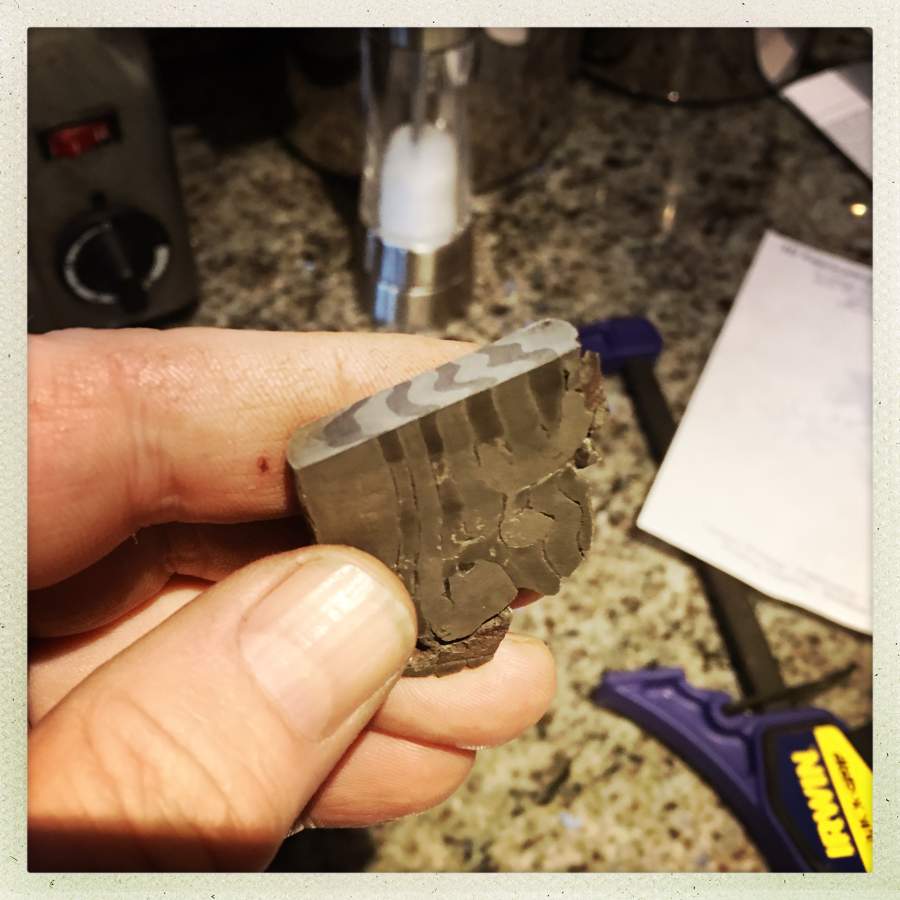 That’s what Experiment #1 looks like after it’s been brought up to welding heat, smashed horizontally and vertically, and basically squished around at random. The main thing I wanted to see was if the welds held, and they did: I put it in a vise and whacked it sideways with a hammer and it didn’t even budge the metal at all – best of all, it did not delaminate. So: I have pattern-welded steel!

Experiment #2 is currently in the form of a large bar-shaped pancakey thing with a very rough surface. I plan to cut some shape out of it and whack on it and grind on it and see whether the welds are tight. Welding Experiment #2 was not a lot of fun: the handle I used my MIG machine to tack on – the weld got soft at temperature and when I pulled it from the forge it drooped sadly. Or, as “sadly” as something radiating 2300F/1260C droops. Maybe I should say it “drooped furiously.”

This is scary, hard work, and the materials are expensive and the set-up time is significant. Making Experiment #1 bar-block took an hour (while I did something else and my bandsaw chewed away at bars of steel) – just throwing a bunch of metal around is time-wasting, hard, a waste of propane, and expensive high carbon steel. I do not intend to experiment much.

What would be a way of designing the operations to perform on a block, before I go to the trouble of cutting it and heating it and mashing it? 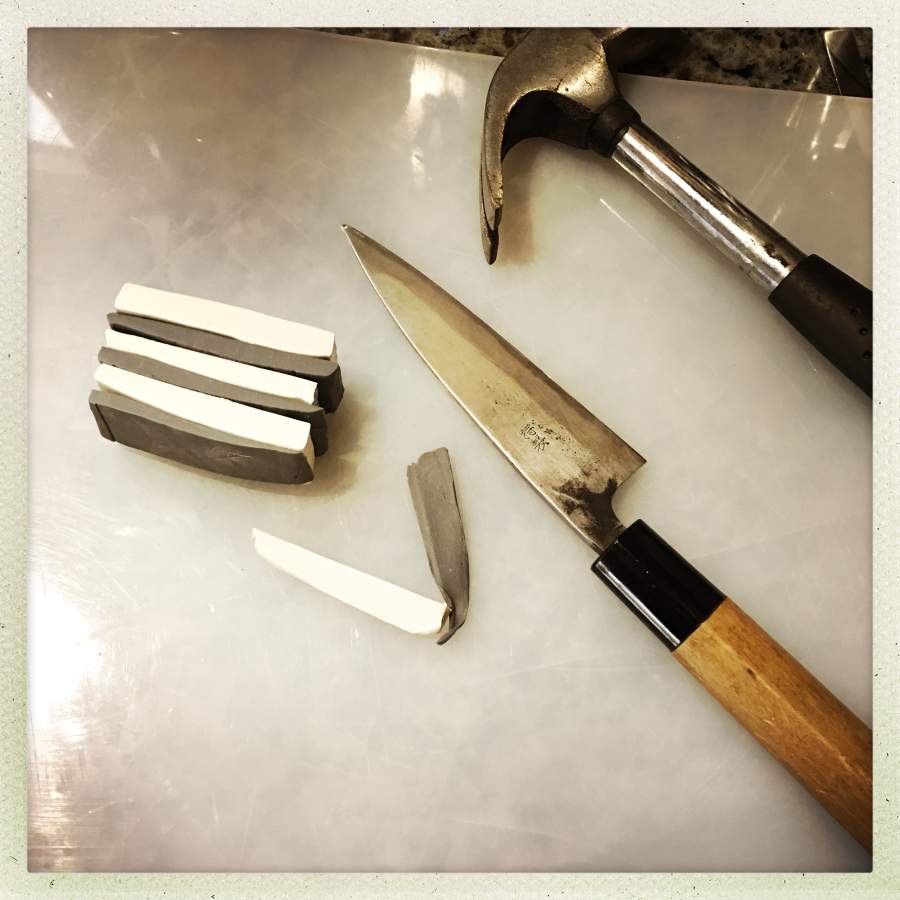 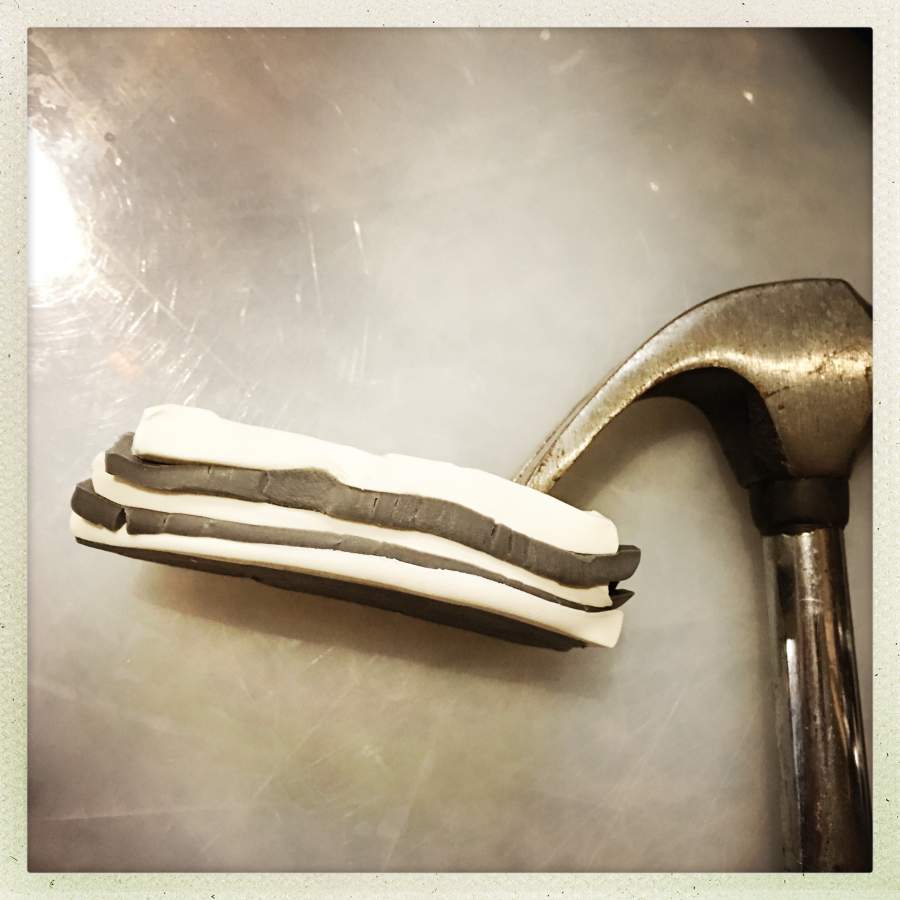 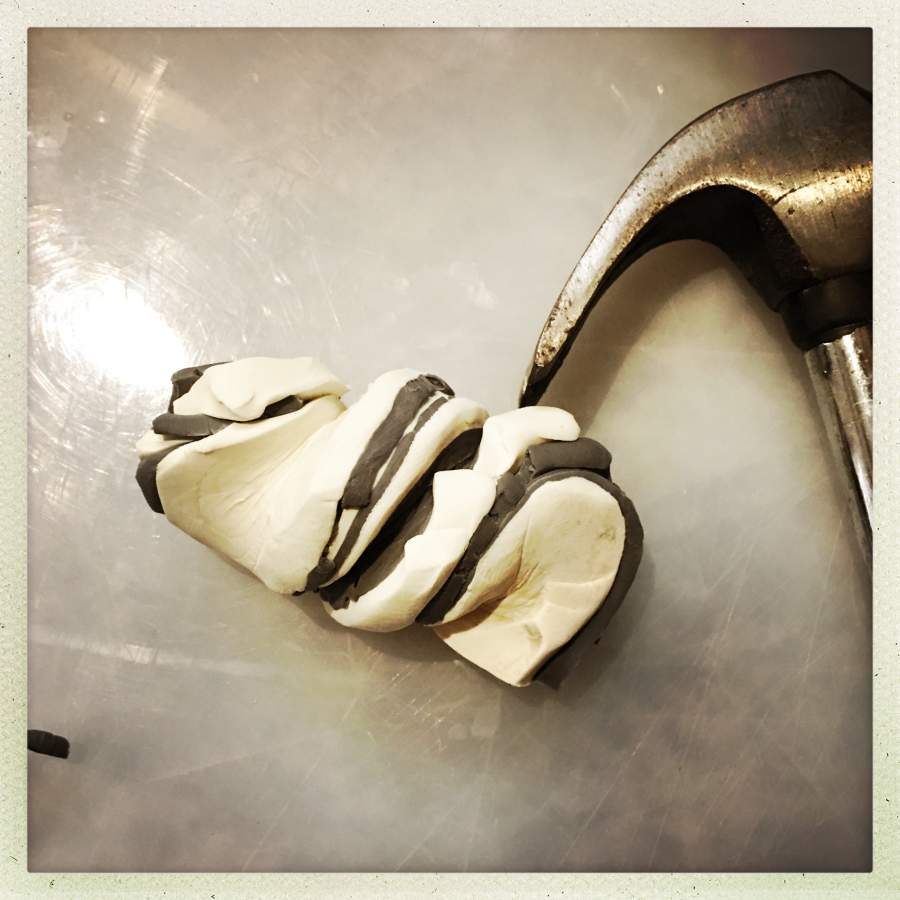 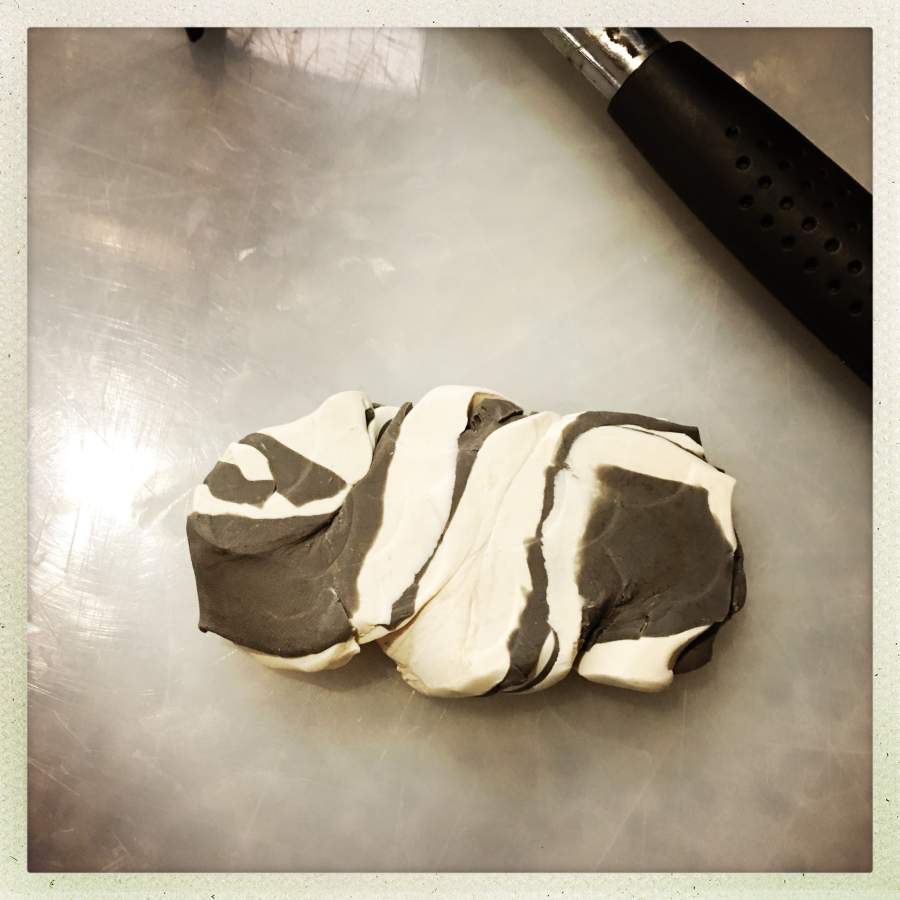 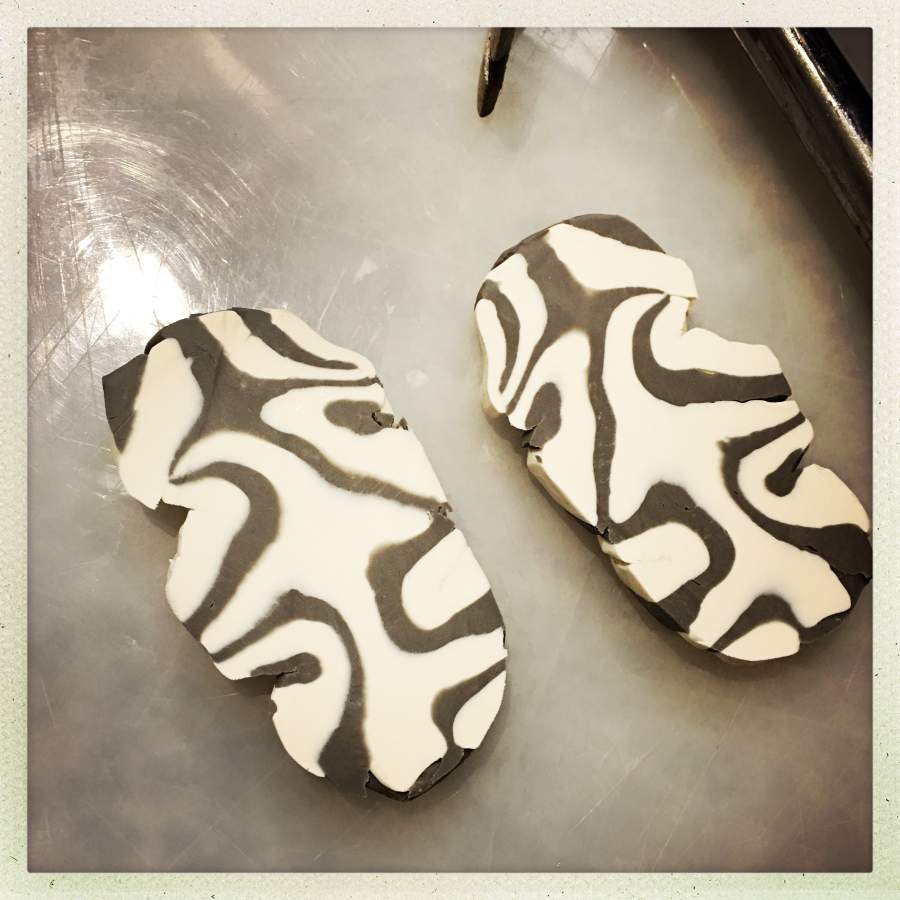 There have been other claymascus experiments. That one is the best and it was a very easy process.

Tiny Wonders » « Does It Come With Guys in Black Suburbans?