Take for instance the arguments of E. O. Wilson, who is a very distinguished biologist at Harvard University who wrote a book entitled On Human Nature. His expertise is in insects, but he jumps from insects to human beings and he talks about human beings as being “innately aggressive.” I go over his book very carefully and show that even though he says that human beings are innately aggressive at one point in his book, and in another point in his book he indicates that human beings have to be taught to be brutal and to kill. That human beings that behave peacefully in one situation may behave aggressively in another situation. In other words whether we, as human beings, are violent and murderous really depends on the situation we’re in. And, if that is so, then it is not simply an inevitable fact of human nature. It means that aggression is one of our potentialities.

We also have the potentiality to be kind. And, in fact, if you look at the history of human behavior over all the centuries, you see instances of terrible human cruelty and you also see instances of remarkable human sacrifice for other people. So, my point is that human nature is open – it’s open to whatever society does to people: to put ideas in their heads, to put weapons in their hands … 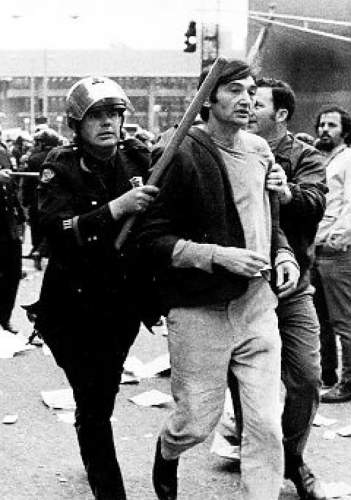 To me one of the most compelling arguments against the idea that wars are the result of human nature is what I think is an obvious fact: if you look at the wars fought, especially in this this century, since wars began to be fought be massed armies – you do not see wars coming as a result of people spontaneously rushing to fight other people. What you see is that the citizens of a country, in order to go to war, must be mobilized by the national state, must be enticed into the military by economic bribes taking them out of lives that which they probably are very unhappy with – they can’t get jobs and they’re offered training and little inducements. Or, drafting them and forcing them to go to war. And modern war requires – in order to mobilize armies, to mobilize a nation for war – requires an enormous campaign of propaganda to persuade the nation that this war is justified. That it’s worth fighting.

When you look at that – when you look at the tremendous lengths to which nations have to go to mobilize and persuade and coerce citizens into fighting, what is left of the argument that it comes because of human nature?

But, no, governments have to present wars in moral terms. They have to say to people, “you’re doing a wonderful thing. It’s not that you want to kill people, you’re doing it for freedom, or democracy. You’re doing it to save somebody.”

Zinn’s argument against “human nature” also applies to sexism and racism – the fact that a blockhead like James Damore has to argue that women don’t belong in tech shows that there are men who are trying to get women out of tech – thereby neatly proving himself wrong.

The way that Zinn delivers these ideas is like a friendly old uncle just explaining a few things; they’re so obvious. But they’re really not.

What the Hell Else Did They Expect? » « This Is Going to Be Interesting