The traditional blacksmith’s anvil stand is a big chunk of log or a stump, but I had this idea of making a laid-up stand out of 2x4s and plywood. It seemed like a good design.

After lunch I headed out to the lumber yard to get stuff to make the anvil stand, turned right out of my driveway, went about 300 yards, and my neighbor had just felled a Mighty Oak Tree and was chopping it into rounds. About 20 minutes later, he had sliced two pieces off the great loaf, and tipped them into the back of my Tahoe using his skid-steer.

He was concerned that I might have trouble getting them out. 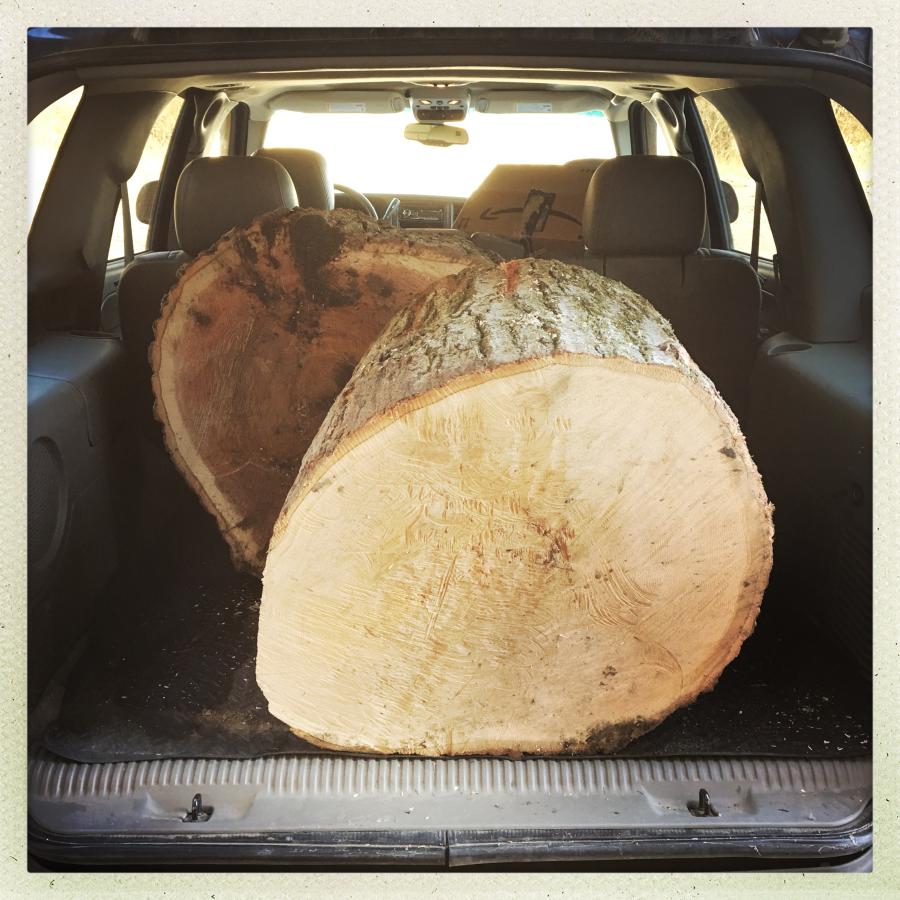 As it happens, he was right. The wood is fresh and wet and each round weighs about 300lb. When I unloaded the first one, I rotated it, then pulled it toward me, and it rolled off the back of the truck and (naturally) came right at me. I did my best impression of an Irish step-dancer, and apparently it was good enough. Then I tipped the round onto my fine art shop dolly and huffed and puffed to its final resting place. That’s code for “I am not moving that !*&#*!& again.” 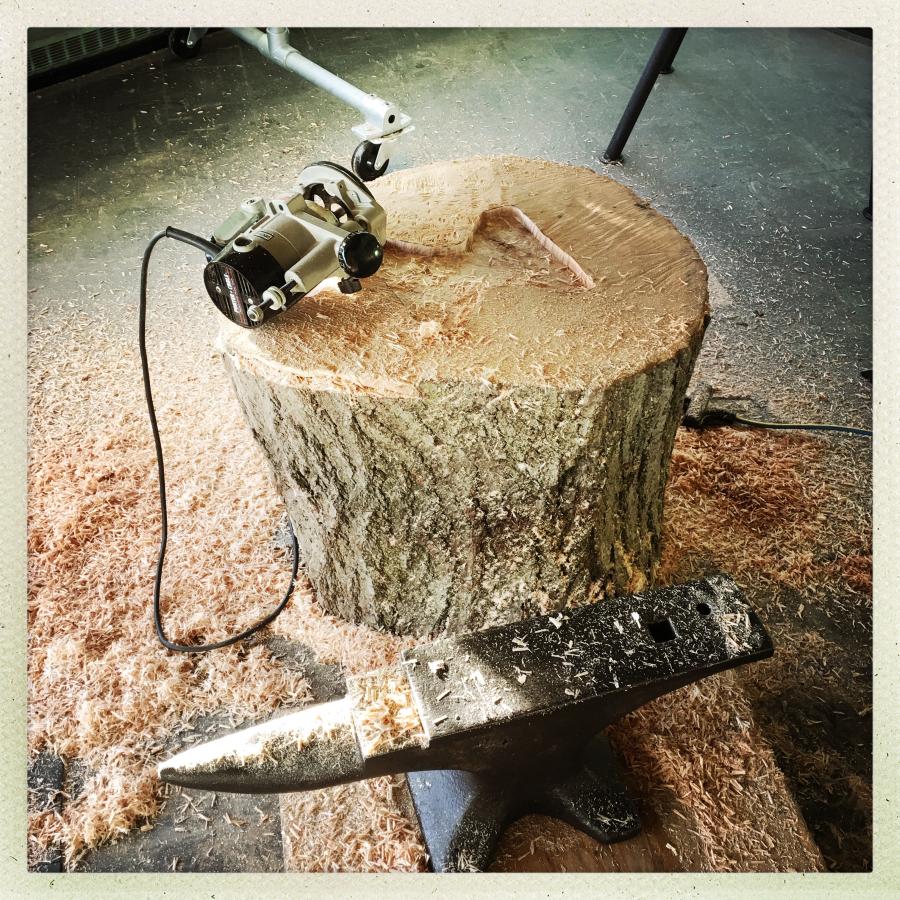 Rather than being smart and making a tracing, I actually lifted the anvil twice.

Plunge-routing a bed for the footer seemed like a good idea but made a terrible mess. The good news is that fresh shredded oak smells wonderful.

Then, I soaked it with a lot of linseed oil. So far, it has absorbed 2 liters. I’m sure it’ll take more than that over time. 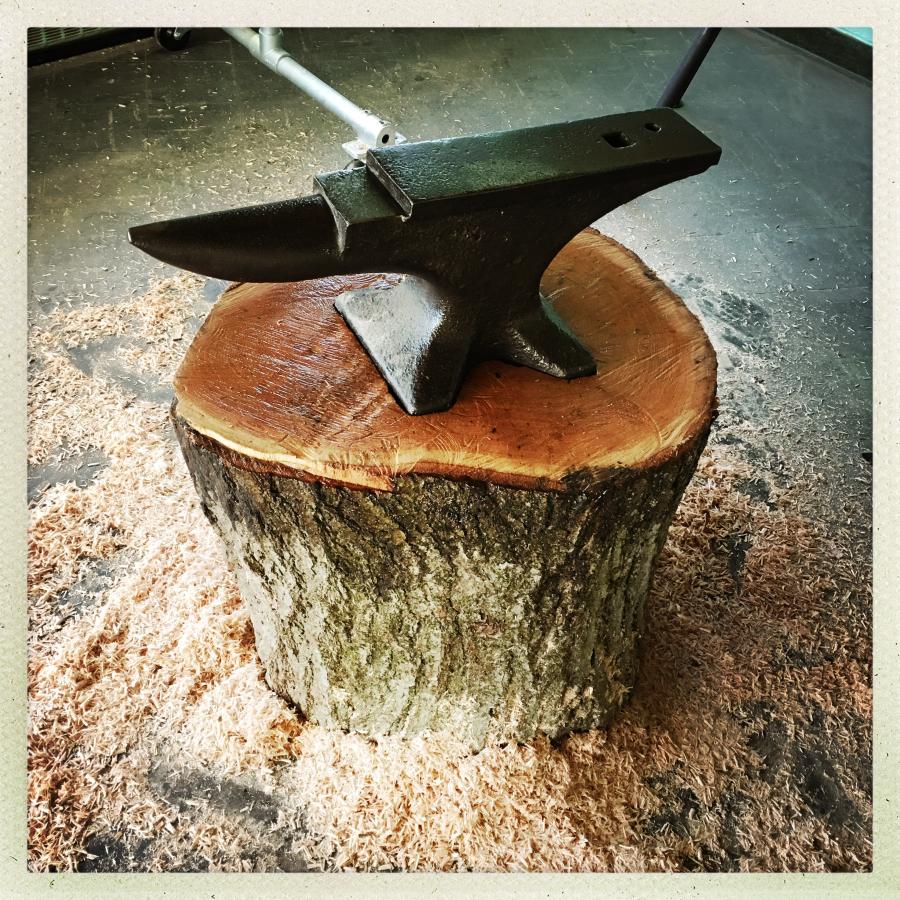 The shape of the round is about as perfect as it could be. My neighbor cut the surfaces as straight as he could, and it rests on the floor just right – there’s no wobble at all. And I don’t think it’s going to blow away or slide around. 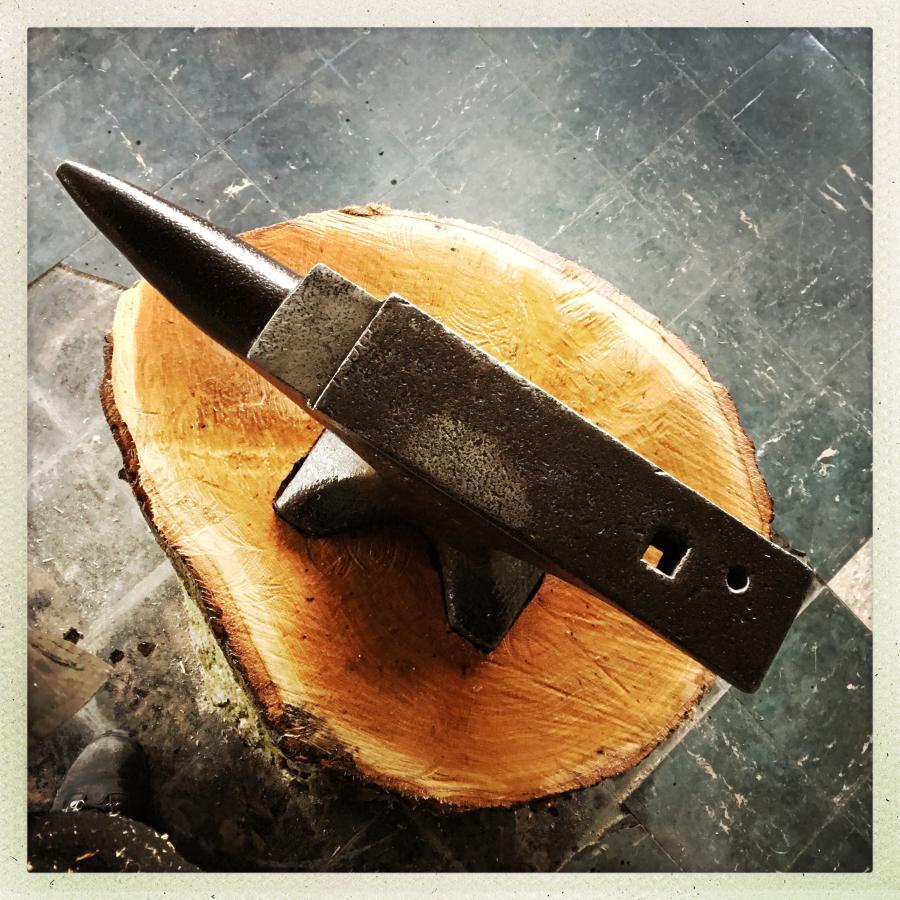 I’ve been a bit deadlocked on the benches; I have one assembled (the welding bench) but the other is still missing some parts. The nice folks at Simplified Building [sb] accidentally sent me 6 tees in the wrong size. Be careful about going to the Simplified Building site – it’s inspirational and it’s very easy to get carried away. Kee clamps are fantastic to work with, but they’re not cheap. On the other hand, if you’re the kind of person who builds benches that ought to be able to support several tons, then Kee clamps may be just your thing. Kee clamps are, basically, Tinker Toy components that you can use to build things out of steel conduit or black iron pipe.

The second bench should be done next week and then I’ll hook up the drops for the electricity (there is going to be a panel box on each bench, and a long power-bar on the underside) Then I can finish the benches with some beeswax oil and start bolting grinders and bandsaws and steel plates and other goodness to them. 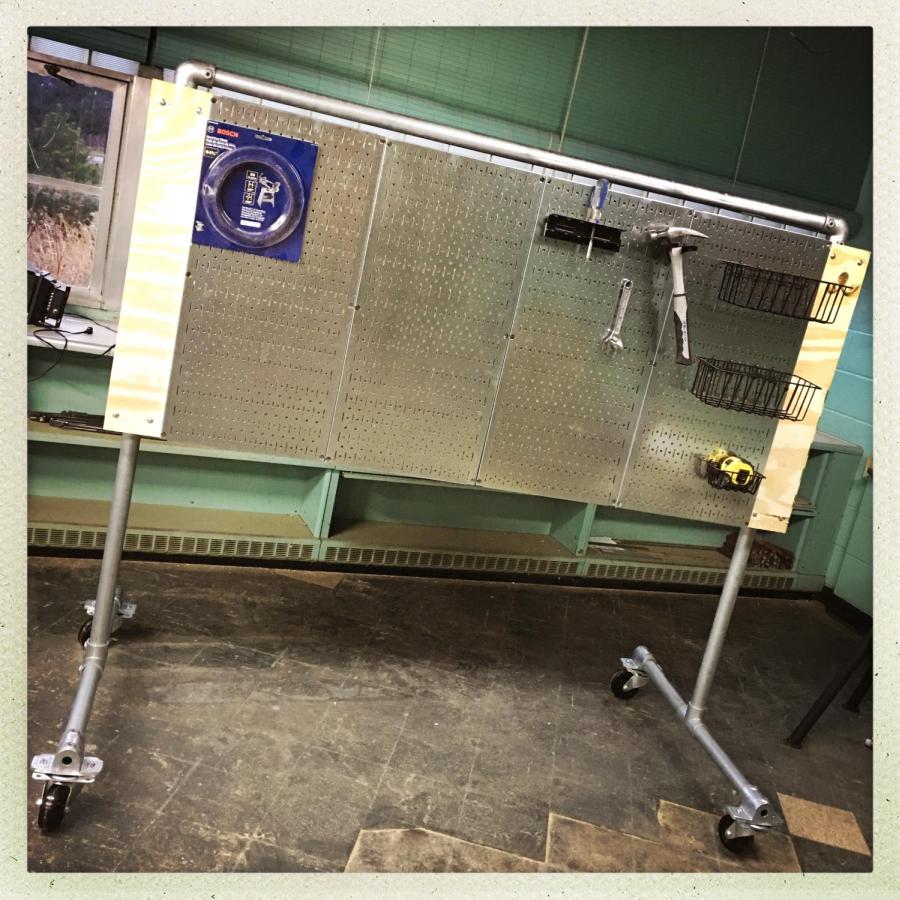 I am a messy worker and I chastise myself constantly for it. I mean that literally: all I do about it is chastise myself. So I got to thinking “why don’t I put my tools away?” Well, the answer is simple: I don’t have to, and putting them away means a lot of walking back and forth. So, I devised a “tool wheely boodler” which has steel pegboard on both sides, and is made with indestructible steel tubing and Kee clamps. It ought to support a huge load of stuff and I can just roll it around to wherever I’m working and maybe then I’ll be able to discipline myself to put my tools away. We’ll see!

Achy all over from moving heavy stuff, and my hair smells of oak sawdust, my hands of linseed oil; it’s been a good day.

I’m incredibly lucky, the way that stuff I want seems to just put itself in my path. Sometimes, it’s almost embarrassing. But then I remind myself that Sithrak is probably doing all this just to set me up so that, when he pulls the plug on me, I’ll be all the more miserable.

The other round is perfect stool-height. I’m going to find some kind of cushion and it’ll be a good observing, coffee drinking, and thinking station.