I’m going to vent for just a second.

During the course of my 55 years on this earth, I’ve felt some butts. In fact I felt one about 20 minutes ago – it was in the shower, and it was mine. It felt familiarly warm, soapy, furry, and too small to keep my pants up without a belt. I’ve felt big butts and I cannot lie, small butts, tight butts, butts of various colors, butts in pants, butts in panties, butts in leggings, and once – well – I’m not exactly sure if a butt is “in” a kilt or not but I was tussling with a kilted someone at a reenactment event and discovered that kilted butt feels a lot like naked butt. I’ve felt old butts and young butts (the youngest being mine own butt) but I did change a diaper once so that was a pretty un-erotic butt for me. I recognize that some people might be turned on by poopy butt, but I’m not. Animal butts: my cats used to insist on my examining their butts in detail and my horse often used me as a scratching-post for his mighty slab-like 600-lb draft-horse butt. And there were some dog butts, too. I think that no matter how dear the dogs were to me, their butts were my least favorite part of them.

In my 30s I frequented strip clubs every so often and so I’ve had butts rubbed on various parts of my clothes. It was that, which got me thinking: “most of these look kind of similar.” For a long time my thought was “yeah, similar ‘nice’ – that similar.” But that wasn’t it, I realized. I had conversations about this with my philosophically inclined mathematician friend: why, after checking out a couple of butts, don’t we establish a butt-baseline and conclude that we know enough about butts that they’re really not worth looking at any more? That kind of ruined strip clubs for me, to be frank. In fact, I could fairly accurately predict a lot about someone’s butt based on the assumption that it’s going to be as fuzzy as their neckline at the top of their chest, it’s going to be the same color as their face, and it’ll be about as muscular as the rest of them, generally sized appropriately for their frame, etc.

In other words: if I walk up to a complete stranger, I can close my eyes for a second, and imagine pretty much exactly what feeling their butt would be like. 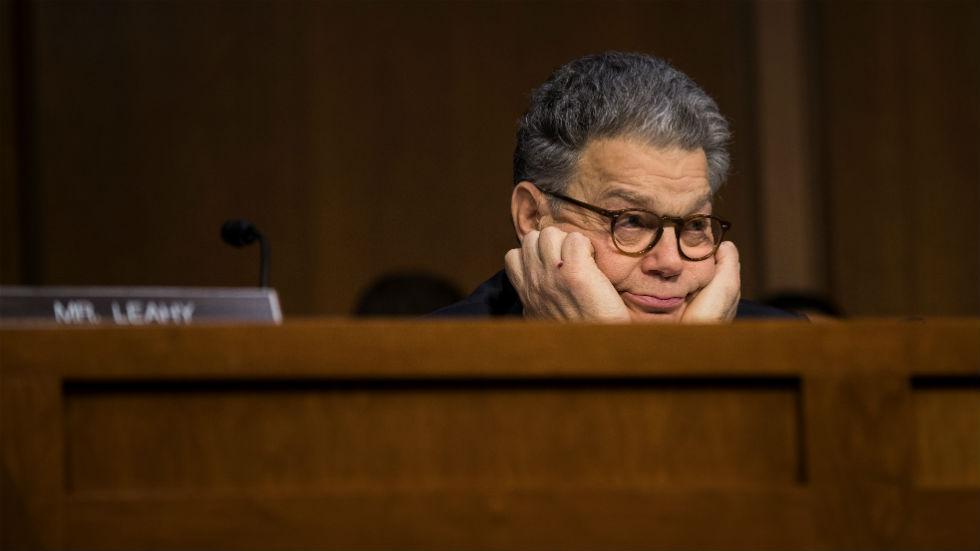 I’ve screwed up before. In fact, I screwed up tonight, and the screw-up was one I had spent imagining before it happened. That is part of my screw up avoidance process: I imagine what it feels like to screw up, and how much I hate that feeling, and then I try to do things in a way that avoid my having that feeling. Anyone who is going to have a promising political career needs to have a screw up avoidance process, because politics will give you nothing but opportunities to screw up. Worse, politics will give you opportunities for broad, national-level screw ups that can get other people killed. I could make a crazy argument that, if someone blew a promising political career just so they could feel what one more butt feels like, and The Empire fell because the wrong politician got in power because of that blown up career, that “is this the butt that launched a thousand ships / and burn’t the topless towers of Ilium?” Why didn’t Al Franken realize that he had a screw up in progress around squeezing people’s butts and set himself a little mental reminder, “whenever you think about grabbing someone’s butt, think about your entire political career becoming a wretched disaster like your comedy career”?

People are rallying around, now, saying “Al Franken shouldn’t step down” because, you know, promising political career and all that. But I don’t agree. Franken is an utter blockhead. He could have glanced side-long at those butts and kept his hand off them. Besides, he already knows what they feel like. They feel like slightly springy denim (or whatever fabric) and maybe they’re warm. But fuck’s sake alive, someone who is so stupid that they’re going to detonate a promising political career in order to feel a pair of pants is too stupid to – aargh – I can’t even come up with a good bunch of words for how dumb that is. There are bags of broken cinder-block that have more basic common sense than Al Franken and concrete is not noted for its perspicacity. And Al Franken never more shall be, either.

These observations have broad relevance: Trump did hurt his campaign a bit with his Access Hollywood comment (not enough, but then he was trying to appeal to stupid people anyway, so being stupid made him a kindred spirit) it’s stupid. It’s all so stupid. The really crazy part is that if Al Franken posted a “Hey can I squeeze your butt?” call, he probably would have been able to give himself carpal tunnel syndrome squeezing consensual butts. He could ask Mix-a-Lot to come down and do some music and make it an event on statehouse lawn, why not? As crazy as that idea sounds, it would have done less damage to his career. On new years’ day, 1907 Teddy Roosevelt set the record for “most hands shaken in one day” when he had an open house at the White House lawn where anyone could come shake his hand: 8,000+ people. I’m not saying that it would have helped Al Franken’s political career to have a butt-squeeze-a-thon, but it wouldn’t have hurt it as badly as his amazing demonstration of stupid has.

Did that squeeze of denim feel that awesome? How does one risk so much for so little?

A digression: a number of years ago, I found myself wandering around INTEROP with router algorithm genius Radia Perlman. We got to talking about the year that INTEROP was held at the same time as the AVN (Adult Video News) conference, and the cultural collision that ensued. After a bit, Radia said, quite seriously, “you know, at a certain point – which we have probably already passed long ago – there’s too much porn that anyone could watch it and ever see the same clip again in their lifetime.” I allowed as that sounded about right. Then, she asked, “so, why are they still making more?”

It seems easy to answer “because, personal preferences” but: not so fast. Since we accept that nobody can watch all the porn in their life-time they don’t have any way of knowing what actually fulfills their preference best. Consider Al Franken, and a line of 2.5 billion women’s butts he can squeeze. That’s too many for any one set of hands to squeeze in a life-time; at some point does Franken just surrender and say “enough! no more butts!” but what if the next woman in line has the perfect butt that he’d die to squeeze. I know that sounds over-dramatic but Franken has basically killed his political career to squeeze butts, so let’s assume he’s very very serious about his butt-squeezing.

“Don’t worry, I won’t imagine butt-squeezing you” – the wild thing is that Chuck Tingle appears to be able to imagine what having sex with a human-sized cup of cappuccino is like. Take that, gender norms! Since I don’t know any of you personally, I don’t have a mental picture of what any of your butts look like, but if I had Chuck Tingle-like powers, I could imagine groping your email address. I won’t do it. Because it feels just like groping my email address!

Tonight’s screw up: I was afraid that when I hit the power for the new electrical runs I installed in my forge-shop, that I might have gotten something wrong and I’d hear the “POP” that says “something is wrong.” Normally that’s not a terrible thing – you just reset the breaker – except the breaker-box at my studio is ancient and the switches are getting funky and unreliable. Now, I have one of the switches disengaged and it won’t re-engage, and the switches went out of production decades ago and I am either going to have to find a replacement on ebay, or reconstruct the entire breaker-box with new breakers or hire an electrician. I used that fear of screwing up to motivate me to make sure I did the wiring right but apparently it wasn’t good enough. So, I just bought myself days of additional work

Washington Post has a good article about Bob Packwood: [wp] another political molester and groper, who kept a detailed collection of notes about his groping. So there’s hope for Al Franken: there actually are dumber bags of broken cinder-block than him.

I mentioned a while ago that I intend to eventually write about some things regarding gender identity and what is beautiful. That’s actually tied up in the thinking behind this posting. Consider this: if your eyes are closed, and you’re squeezing a butt through a pair of jeans, can you tell the gender identity of the butt’s owner? And does it matter? You’re not actually feeling a butt, you’re feeling a pair of jeans. Why is this interesting? Why is any of this interesting? What is actually going on when someone grabs a big handful of denim and gets a big erotic charge out of it? What, exactly, the hell is going on here? I started thinking about this and then I was swirling down a rat-hole: why is it interesting to squeeze someone else’s butt, but not my own? If I can’t tell the gender of the butt I am squeezing, then what about whatever gender norms I am supposed to be concerned with? I think that this confusion I am feeling is transmuted into discomfort and arousal and some people’s reaction to that is anger, whereas I am just mightily puzzled.

I wish I could interview Al Franken and ask him “exactly what did you get out of squeezing those women’s butts, anyhow?” And then I’d ask him, “are you aware that there are butt models? You probably could have spent a happy hour consensually squeezing a top-notch professional butt in whatever garments you prefer, but you’d have had to ask.” He could have just done it and posted it on his Instagram. But I think that it’s the not asking part you get off on…