We have been raised on a steady diet of propaganda that Officer Friendly is, well, our friend.

Your Policeman is Your Friend

To some extent … that may be true, in the sense that good servants are repaid well by their masters. The stereotype of 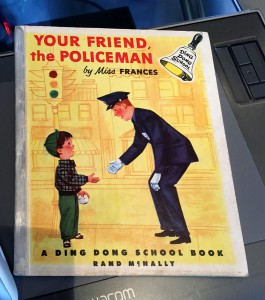 the Irish New York beat cop owes more to the poverty of irish immigrants than to their skin color. Police were only allowed to unionize in some states (e.g: Pennsylania) in 1915, during the depression and periods of labor unrest.

Read that between the lines and it says the police sided with labor, i.e.: not the oligarchy. Maybe they were tired of having to break heads at the steel mills or something. Or maybe, like the brave police heroes of today, they were tired of risking being hurt by resistance. There is a huge body of interesting history about the Pinkertons’, the early days of policing and the unions, early terrorism in the US, and – of course – the FBI – that I could keep you entertained with for years. But. yeah, the old movies where officer O’Malley knuckles his cap to the oligarch? That’s exactly right. “Boardwalk Empire” and “Deadwood” are not quite documentaries but are fairly accurate depictions of the degree to which law enforcement is about enforcing the prevalence of whatever gang is in power, not justice.

Policing is not considered a highly paid career – that’s why it’s been relatively open to advancement. After all, the 1% don’t want to have to rein in the children of other 1%ers when they go four wheeling across the golf course.

In the interest of maintaining social order we are taught from an early age to obey the police, because, they’re our friends.

It doesn’t take Socrates to tell you that’s a straightforward argument from authority. We’re not being told to behave because it’s the right thing to do because then we’d have to ask the police “hey, why can’t Mrs Obrycki smoke that weed?” Maybe the cop doesn’t actually have a very good answer. 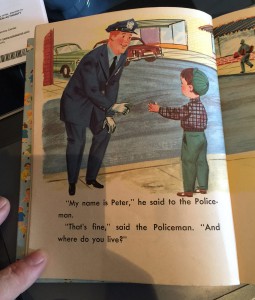 When you dig into cops behaving like moral nihilists* it’s not hard to find paydirt. If the cops can’t find a reason to bust you, they’re pretty happy with making up a reason, then busting you for that.

What you need to remember about cops is that they’re not your friends, they’re your employees. And in a lot of cases, they’re really, really, dangerous and bad employees.

Think about that software engineer down the hall. You know, the one who writes ruby on rails apps, and doesn’t know how to debug code? Give them a gun and expect them to keep order when they’re hung over and tired and maybe a bit full of adrenaline. Expect that software engineer to execute good judgement and show great fire control in a person-to-person encounter where all their social and racial preconceptions can come strut onstage. How do you think it’s going to work for you? When I was a kid, arguing with my dad as a revolutionary (like most 15 year olds do!) I learned that revolutions only happen when the standing military and the police join the side of the rebels. This is why the wise oligarch makes sure their police are well-armed and well-fed. The reason why New York and Boston cops used to be irish was so that the predominantly irish police force could clan up against all the other immigrants when it came time for some head-busting time. It’s the old “divide et impera” all over again.

The wise oligarch also makes sure their police are not complete chucklefucks, but it’s a safe bet – though a sad one – that the police are going to be underpaid, doing a dirty job, and being unpopular, besides. Basic strategy dictates that if you’re going to give your employees hurtful tools, they should know the right direction to point them. My father and I debate, 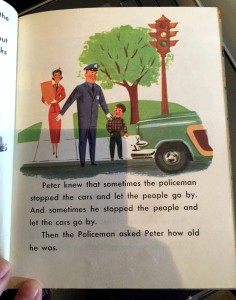 What do you notice about these early pieces of police propaganda?

Well, yeah, everyone is WHITE.

I have to tell you about a shameful thing here, but it’s true. Last night I was talking to my sweetie Anna, and I was ranting a bit about cops who shoot dogs. I hate cops that shoot dogs – and so should you – because: dogs! Dogs are awesome!

Then she said, kinda softly, but so it carried over the fan-noise from the computer: “You know, you white guys complain more when cops shoot a dog than when they shoot a black person.” 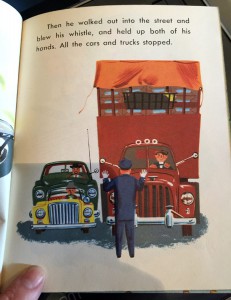 And I look through my 1950s version of “officer friendly” who we’ve all been propagandized to obey and I realize it’s part and profound parcel of a systematic program of propaganda. Remember: Heinrich Himmler created the SS** to be a copy of the FBI, not the other way around; he admired their clean-cut professionalism.

I am not saying to go shoot cops. I am saying that cops know which side their bread is buttered on and we all know it, too, and we ought to act that way. Cops need to understand (and they mostly do) that we can shoot back. In that matter I unreservedly hold with the Black Panthers’ carrying rights: follow cops around and blow them away if they’re being racists. They need oversight.

The founding fathers of the USA were deeply concerned with controlling the forces that might be arrayed against them*** and I am frankly surprised that the oligarchy is giving today’s police the kind of stuff that they are.

Cops know that they’re one of the fulcrums of the police state – when they start to flutter the whole thing is in play.

The cops in Baton Rouge who shot Alton Sterling at the same moment as I was complaining to my Anna about cops shooting dogs…  They’re continuing to write checks against a bank account that’s a long time past due.

We need better cops in this country. We need them bad, and we need them fast. Not tougher cops:

(* I am going to use the definition of moral nihilism, here, in a limited form, i.e.the the justification of the ends is their means)

(** Technically, SD, Sicherheitsdienst but I do not want to argue nazism details with any of you and you don’t want to argue them with me, trust me!)

(*** Because they were a scary bunch of crooks, tax-dodgers, traitors and cheats)