As the Omicron variant keeps surging, we hear of yet another needless death.

A leading QAnon promoter who urged both her followers and strangers she passed on the street not to take the COVID vaccine died Thursday of the coronavirus, making her just the latest vaccine opponent killed by the disease.

Cirsten Weldon had amassed tens of thousands of followers across right-wing social media networks by promoting the pro-Trump QAnon conspiracy under the screenname “CirstenW.” She was prominent enough to become a sort of QAnon interpreter for comedian conspiracy theorist Roseanne Barr and started recording videos about QAnon with her.

Weldon focused on attacking vaccines and other efforts to fight COVID-19, saying in one video that Dr. Anthony Fauci “needs to be hung from a rope.” She claimed the vaccine killed people and even recorded herself yelling at people standing in line to receive vaccines.
END_OF_DOCUMENT_TOKEN_TO_BE_REPLACED

An interesting fact about the QAnon phenomenon is that even though the mysterious Q has not been heard of in over four months, suggesting that following Trump’s defeat they are trying to wash their hands of this whole thing, the cult keeps going on, though there has definitely been some attrition as some people’s hopes were dashed when Biden’s inauguration went ahead without Trump swooping in and arresting everybody.

Another interesting thing is that the cult members are not easy to pigeonhole and are all over the place, except for one common factor.
END_OF_DOCUMENT_TOKEN_TO_BE_REPLACED

The ridiculous figure known as QAnon shaman whose real name is Jacob Chansley and is now in jail for his role in the January 6th insurrection, has lost his latest attempt to be released from jail, this time on (wait for it) religious grounds.

According to court documents, a lawyer representing the 33-year-old Chansley — who also led others in prayer as they occupied the U.S. Senate chamber during the insurrection — asked in February that his client be released from prison while he awaits trial in part because of complications derived from his refusal accept a vaccine for COVID-19.

The request involved Chansley’s religious beliefs, which borrow from conspiracy theories and several religious traditions: The attorney claimed his client’s “longstanding status as a practicing Shaman precludes him from feeding into his body any vaccination.” The request noted that Chansley was removed from the U.S. Navy in 2007 for refusing to take a vaccine for anthrax.

Chansley’s refusal to be vaccinated, combined with various COVID-19 protocols in place at prisons where he is being held, have made “meaningful un-monitored communication” with his attorney impossible, the lawyer claimed.

“To put it plainly, defendant’s religious objection to the COVID-19 vaccine is not a relevant reason, let alone a ‘compelling reason,’ to grant his temporary release,” Lamberth wrote in the 32-page opinion.

END_OF_DOCUMENT_TOKEN_TO_BE_REPLACED

The weird guy known as QAnon shaman who was part of the insurrection in the US Capitol and sat the Senate president’s chair and even said a prayer is now in jail. The past weekend, he gave an interview to the CBS show 60 Minutes+. Without his makeup and regalia, he cuts quite a different figure. It appears that he lives with his mother who was also interviewed and she seems to be an enabler of his idiocy.

END_OF_DOCUMENT_TOKEN_TO_BE_REPLACED

Adam Lewental tries to understand how his parents became fans of the QAnon conspiracy theory and thinks that the best-selling book The Da Vinci Code may offer some clues. (I have not read the book but did see the 2006 film starring Tom Hanks and Audrey Tautou and found it so absurd that any inclination that I may have had to read the book was utterly squelched.)

Lewental says that he first read it as a 13-year old and was blown away by it. But he “was shocked to find upon revisiting the book as an adult that it is absolute, unadulterated trash. Just really poor, from top to bottom.” But after explaining why it is so awful in terms of the plot and the quality of the writing, he says the damage done by the book is far more than to the world of literature. He says that its success is based on the fact that it persuades the reader to think that they themselves are able to figure out the clues and connect the dots to reveal a complex plot that is hidden from the unenlightened. This is exactly the mindset of the QAnoners.
END_OF_DOCUMENT_TOKEN_TO_BE_REPLACED

In a recent comment, Who Cares compared the current Republican party to the Know Nothings of days gone by. I had heard of the Know Nothings and was curious about them, mainly because it was such a weird name for a political party. But I knew nothing (Ha!) about them and decided to look into this and found this article by Zachary Karabell that took a deep look at their sudden emergence in the 19th century and their equally sudden collapse. He compares them more to the QAnon movement within the Republican party rather than the party itself, but that may be a distinction without much difference.
END_OF_DOCUMENT_TOKEN_TO_BE_REPLACED 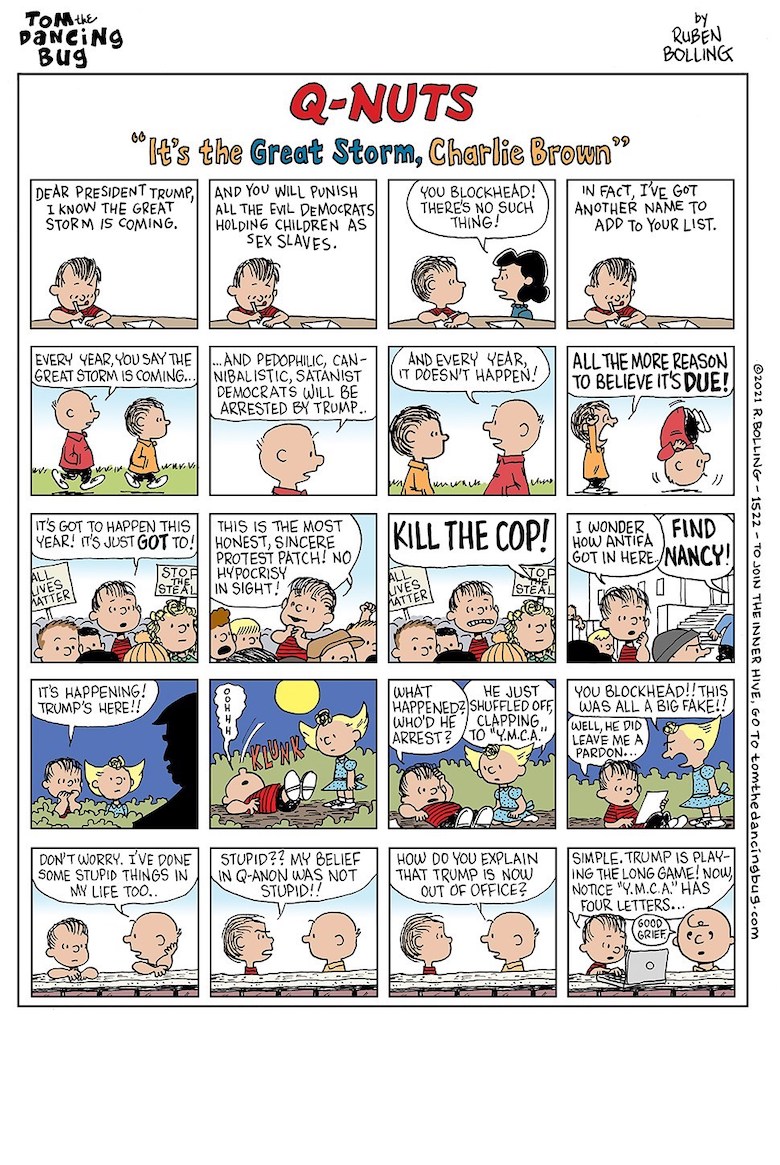 Stephen Colbert discusses what is going on with the vaccination program as well as developments with the QAnon conspiracy and their great hopes for a grand climax at the inauguration. He has an idea for something that QAnoners can do now that is as absorbing but not as destructive.

Seth Meyers also makes fun of Cruz’s pathetic attempts to ingratiate himself with Pittsburgh after he had tried to throw out all of Pennsylvania’s votes.

I am fascinated by cults and the people who join them. And the mother of all political cults is QAnon. As many people know by now, this was a Trump-supporting cult that believed that the Democratic party and other prominent people were part of some global conspiracy of pedophiles and that Trump was a genius strategist who was carefully planning to, in a dramatic denouement, expose them all and arrest and execute them. There are a lot more layers to this cult’s beliefs and I am just giving the highlights.

Naturally they did not accept that Trump had lost the election and thought that he would be able to reverse the outcome. As the day of Biden’s inauguration came close, excitement built up among them and they seemed to expect that just as he was about to be sworn in, federal agents would run down the steps and arrest him and all the other dignitaries and execute them, and that Trump would emerge as their victorious leader. Yes, really. (The people are watching w-a-a-a-y too many action/fantasy films.)
END_OF_DOCUMENT_TOKEN_TO_BE_REPLACED

I am curious as to what is going to happen to the QAnon movement now. As readers know, these are people who think that there is someone at the top levels of government with high-level security clearance (possibly Donald Trump himself) who uses the pseudonym Q to drop hints as to what is going on behind the scenes. As a result, QAnon followers believe that the top echelons of the Democratic party consist of pedophiles, sex-traffickers, and even those who eat children and that Trump has a plan to flush out and arrest them in a spectacular denouement. They have been eagerly waiting for this moment. And waiting. And waiting. But like Godot (or perhaps more appropriately, Guffman), Q has so far not revealed themselves and the prediction have so far failed to materialize.
END_OF_DOCUMENT_TOKEN_TO_BE_REPLACED