Politicians in the US (and many ordinary Americans) like to boast about how this country is the greatest and the oldest continuing democracy. The former claim has always been dubious since from the beginning the country has gone out of its way to limit the right to vote to a favored class: first by not giving Blacks and women to vote, then by placing restrictions like poll taxes and literacy tests that excluded the poor, and to this date seeking to find novel ways to discourage poor and minority communities from voting by making them jump through various hoops and by gerrymandering electoral districts so that the elected representatives are not representative of the electorate.
END_OF_DOCUMENT_TOKEN_TO_BE_REPLACED

A friend alerted me to the existence of this series of fascinating BBC podcasts called In Our Time. Each 40-50 minute episode consists of the host Melvin Bragg exploring one topic in depth with three academics from various British universities and research institutions. Originating in 1998, it produces a new episode each week and by now its archives have close to 1,000 podcasts. Each episode also has a comprehensive reading list for those who want to know more. The topics range all over the place, covering science, history, literature, art, religion, and so on so that anyone will find something that appeals to them or are curious about. Since the panelists are experts in the area being discussed, one gets reliable information based on in-depth research. The program is ideal for a generalist like me.
END_OF_DOCUMENT_TOKEN_TO_BE_REPLACED

Probability can be deceptive. The concept sounds easy to understand and we glibly use the ideas in everyday life but there are many subtleties involved. Given how important probabilistic ideas are in life, some have suggested that it be introduced into school mathematics curricula much earlier than it currently is and discussed in more depth.

One subtlety can be highlighted by this example. Suppose that you read about a new study that finds that by taking some measures, you can reduce the risk of stroke by 50%. Should you adopt those measures?

To make a decision you need to weigh the benefit against the costs, which in this case may be that the measures involve taking medications that have rather serious side effects, or that the regimen involved is arduous, or that it is very expensive. But even taking those into account is not enough to decide because you need to know another key piece of information and that is the absolute risk numbers.

The relative risk is what is usually reported and quoted in the media. It is obtained by comparing the results of the test group with the control group. So if the test group has five positive cases and the control group has ten, then the relative risk reduction is 50%. But this ignores the importance of sample size that determines the absolute risk. If the sample size had been 10,000, the absolute risk would have dropped from 0.1% to 0.05%.

Paula Byrne, one of the authors of a recent study on the benefits of taking statins to lower cholesterol, says that focusing only on relative risk does not give enough information to make an informed decision.
END_OF_DOCUMENT_TOKEN_TO_BE_REPLACED

You would think that by now, after all the protests about racist depictions of Native Americans, that at least some person in large organizations would realize when something is at best racially insensitive or downright racist and say, “Wait a minute! This is not appropriate.” But apparently not.

“The live performance in our park did not reflect our core values and we regret it took place,” a spokesperson, Jacquee Wahler, said in a statement.

“Any Natives who attend [Port Neches-Groves high school] should prolly just accept their classmates dehumanising them cuz ‘tradition’, right?” wrote Tara Houska, an Ojibwe tribal attorney and founder of the Giniw Collective and Not Your Mascots.

“Shame on [Disney] hosting this,” she said. “Nostalgic racism is RACISM.”

According to the Orlando Sentinel, a Disney employee asked the troupe to remove headdresses prior to their performance.

Wahler, the Disney spokesperson, said the performance that followed was “not consistent with the audition tape the school provided and we have immediately put measures in place so this is not repeated”.

And any Natives who attend @pngisd should prolly just accept their classmates dehumanizing them cuz “tradition”, right?

Shame on @DisneyParks hosting this. Nostalgic racism is RACISM. pic.twitter.com/ELsJHRgJlw

I am pretty sure that Native Americans must be simply fed up with people ‘honoring’ them without first consulting with them about what would be an appropriate form such an action should take, and instead going with the first stereotype that they can come up with and then defending their decisions with ridiculous rationalizations.

Currently we are are experiencing a rare period when employers are finding it hard to fill positions, especially in the lower-wage service sector. But it is telling how differently the media covers this to how they cover the times when unemployment levels are high. The common thread is that in each case, they present the point of view of the employers, not the workers.

Cartoonist Ted Rall accurately captures the differences in the way that the media and the pundit class cover a labor surplus versus a labor shortage. 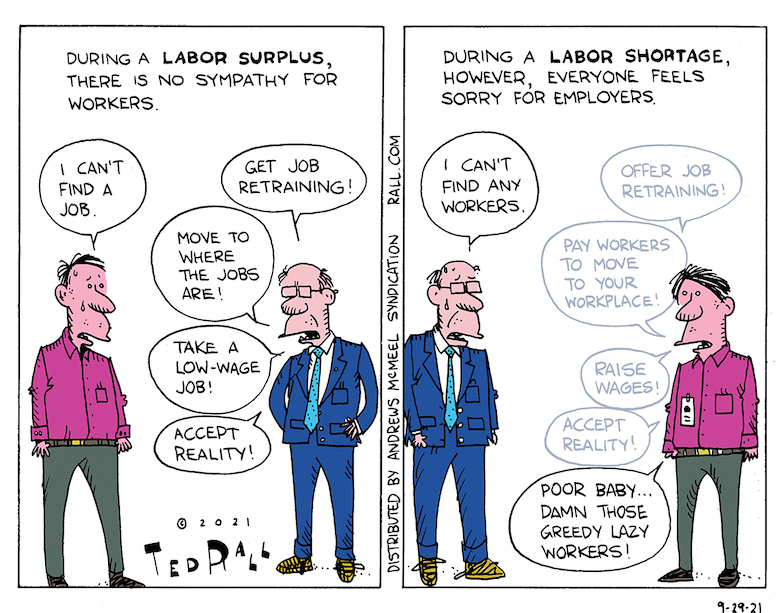 When jobs are scarce, workers are told to make big changes in their lives to adjust to reality. Now that workers are scarce, however, whiny employers are offered sympathy rather than given advice to change their obsolete business models.

Commenter anat linked to a very nice visual display of the latest sunrise times across the US if Daylight Savings Times becomes the fixed time all year long, as the legislation passed the US Senate decrees. The House of Representative has not agreed as yet. 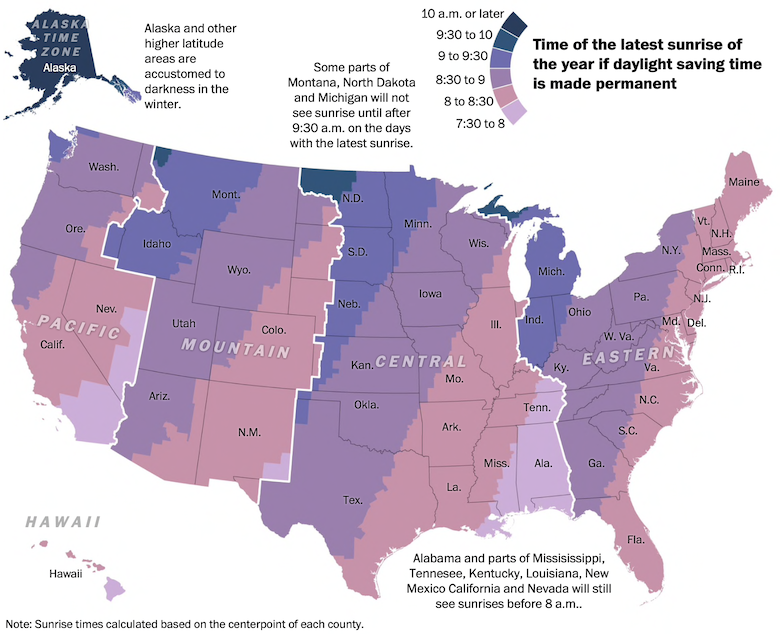 END_OF_DOCUMENT_TOKEN_TO_BE_REPLACED

In this age of cryptocurrencies and NFTs, Stephen Colbert imagines what the next blockbuster heist film is going to be about.

A great example of why monopolies are bad can be seen in the practices of the two companies Ticketmaster and Live Nation. The merger of the two has resulted in them wielding enormous power when it comes to live concerts. As a result, consumers get both price-gouged and lousy service.

Back in 2009, New Jersey congressperson Bill Pascrell, Jr., among others, warned that allowing the merger would be bad but the Obama administration waved it through. In 2018, Pascrell wrote an article saying that all their dire predictions had come true.
END_OF_DOCUMENT_TOKEN_TO_BE_REPLACED

Here is a clip of police in Los Angeles chasing down a suspect.

It. reminded me of those old black and white slapstick comedies of the silent film era with the bungling Keystone Cops, with them running all over the place.

As long time readers know, I grumble about that biannual ritual in the US of changing the clocks forward by one hour in the spring (when it becomes Daylight Savings Time) and then one hour back in the fall (when it reverts to Standard Time). We just made the change this past Sunday and I went around changing the eight clocks that are not connected to the internet. You would think that I would have been on top of this issue but I was taken completely by surprise to learn that the US Senate yesterday unanimously passed a resolution making DST permanent

That does not mean that the deed is done. The House of Representatives has not passed the measure and Joe Biden has not stated that he will sign the bill into law.
END_OF_DOCUMENT_TOKEN_TO_BE_REPLACED