I am one of the fortunate ones in that I was able to get vaccinated and boosted and since I am retired, during the worst of the pandemic I could spend most of my time at home and thus could easily practice social distancing. I also wore masks whenever I was in any indoor facility with other people. But while it was not onerous, I too have started to feel weary of taking these precautions and was hopeful that the rapid decline in cases in the recent past signaled the transition from a pandemic phase to an endemic phase that would enable us to let down our guard and just take the kinds of precautions we are used to with other familiar airborne contagions like the flu and cold, where we stay at home when we have symptoms and avoid contact with people who are exhibiting symptoms.

But now we hear reports of a delta-omicron hybrid and a BA.2 version of the omicron variant causing a slight uptick in cases in Europe and the UK, which in the past have been leading indicators of what would happen in the US after about two or three weeks. 45% of the US population has been infected with omicron and thus have some immunity to that BA.2 version of it but that still leaves a large number at risk.

What is more surprising is that those countries that had great success in keeping cases low in the early days when the pandemic was raging through the US, like China and New Zealand, are now seeing a rise in cases. Also surprising is the situation in Hong Kong which started seeing a rise in cases and deaths beginning in mid-February. That country has a relatively low vaccination rate. 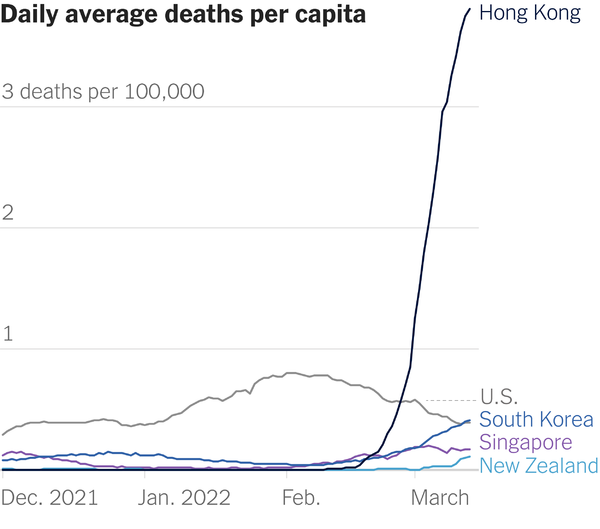 After more than two years of mostly fighting off Covid, Hong Kong has become the world’s worst hot spot. The main problem, as in so many other places, is vaccine skepticism.

Heading into the current outbreak, nearly 40 percent of Hong Kong’s population was not vaccinated, and more than half of people over 70 – the age group most vulnerable to severe Covid – were unvaccinated.

Why? Many Hong Kong residents do not trust the government, given the increasing repression by China. Others are dubious of Western medicine or have been influenced by misinformation, as my colleagues Alexandra Stevenson and Austin Ramzy have reported. “I worry that the side effects of vaccination will kill me,” Lam Suk-haa, who’s 80 years old, told The Times last month. “I won’t get vaccinated as long as I have a choice.”

Until recently, Hong Kong – like mainland China – had been largely successful in keeping out the virus, which meant that vaccine skepticism did not bring large costs. But the Omicron variant is so contagious that it overwhelmed Hong Kong’s “zero-Covid” strategy.
…

The death rate in Hong Kong has soared this month, surpassing 25 per 100,000 residents in the past week. That’s not as high as New York’s peak death rate in the spring of 2020, but it is higher than in any country today. And Hong Kong’s rate will probably continue rising, because new case numbers did not start falling until about a week ago; death trends typically lag case trends by about three weeks.

Vaccination continues to be the best protection against infection or serious illness but ideology is playing an important role in the US in whether one gets vaccinated or not.

Republicans have long been split over vaccination, with many eagerly getting shots while many others refuse. Democrats have their own growing schism, between those who believe Covid precautions should continue to be paramount and those who favor moves toward normalcy.

Very liberal Americans make up almost 10 percent of adults, according to our poll and others. Many are younger than 50 and have a four-year college degree. They span all races but are disproportionately white, the Pew Research Center has found.

In recent years, these progressive professionals have tended to adopt a cautious approach to personal safety. You might even call it conservative.
…

When it comes to Covid, there is abundant evidence that the most liberal Americans are exaggerating the risks to the vaccinated and to children.

Consider that Democrats younger than 45 are more likely to say the virus poses a great risk to them than those older than 65 are – which is inconsistent with scientific reality but consistent with younger Democrats’ more intense liberalism. Or consider that many liberals (including Sonia Sotomayor) feel deep anxiety about Covid’s effects on children – even though the flu kills more children in a typical year and car crashes kill about five times as many. Long Covid, similarly, appears to be rare in both children and vaccinated people.

The truth is that the vast majority of severe Covid illness is occurring among those Americans who have chosen not to be vaccinated and boosted.
…

The American focus on Covid’s dangers, by contrast, has caused disruption and isolation that feed educational losses, mental health troubles, drug overdoses, violent crime and vehicle crashes. These damages have fallen disproportionately on low-income, Black and Latino Americans, exacerbating inequality in ways that would seem to violate liberal values.

“Rather than eliminating the risk of Covid, you’ve got to manage the risk,” Elizabeth Howe Bradley, a public health expert and the president of Vassar College, told me recently. “If you really go for minimizing the risk, you’re going to have unintended consequences to people’s physical health, their mental health, their social health.”

Sociologists and psychologists are going to have a rich mine of information to analyze in the coming years.