Due to having house guests, blogging will be light for a few days.

According to our current theories of physics, all the matter-energy in the universe consists of about 68.5% dark energy, 26.5% dark matter, and about 5% regular matter. The dark matter is believed to be around galaxies in a halo while dark energy is everywhere. The problem is that we have not so far been able to directly detect any dark matter particles despite strenuous and expensive efforts. After each failure to detect a signal, the debate is always whether to give up the search and declare that dark matter does not exist or to build a bigger, more sensitive detector with other materials in the hope that it will work. As I discuss in my book The Great Paradox of Science, this is a recurring situation in the history science. At any given time, in addition to the dominant paradigm, there are always other competing paradigms seeking to dethrone the champion. The fortunes of the competitors depend upon he fortunes of the dominant one and in the case of dark matter, competitors see an opening in the failure to detect it.
END_OF_DOCUMENT_TOKEN_TO_BE_REPLACED

Some readers may have seen the story about a woman who was raped on a SEPTA commuter train in Philadelphia while other people on the train either did nothing or even took videos of it. I found this hard to believe and felt that there must be more to the story and so suspended judgment. Now later accounts suggest that the initial account of callous bystanders is incorrect and that the story is more complicated.

Some of us may remember the awful story back in 1964 of Kitty Genovese, who was murdered on a street while people living in the buildings reportedly ignored her screams. That story turned out to be not true but created an enduring myth about callous bystanders.
END_OF_DOCUMENT_TOKEN_TO_BE_REPLACED 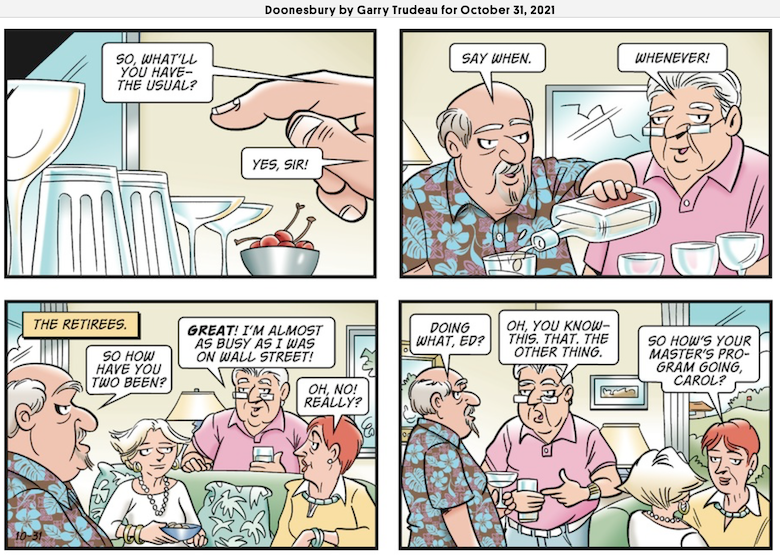 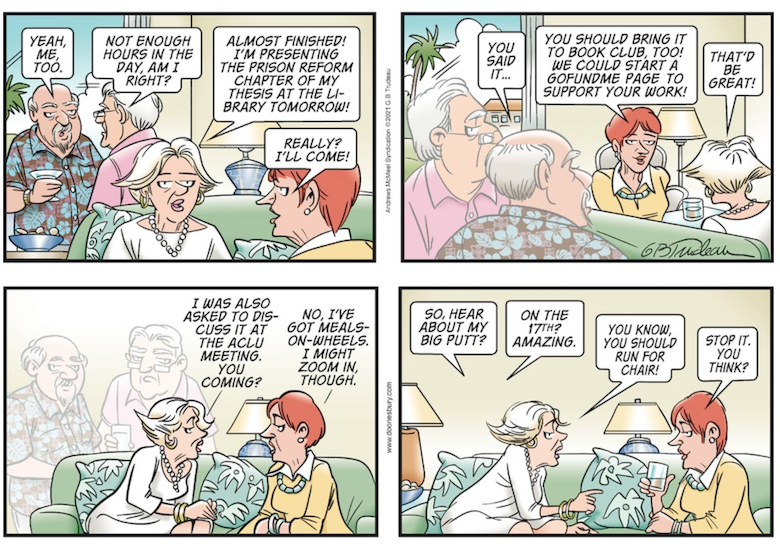 Doonesbury strips go in a lot for political and social commentary. I usually get the point of the cartoons but this one puzzles me. What do the two guys disappearing signify? Are they dead? But that would not be making any kind of point. Is it meant to show that these people who were once Wall Street big shots are now reduced to pretending to still be busy but in really are just fading into irrelevance, spending their retirement days in idleness, while their wives, freed from the constraints of being corporate spouses, have found new leases in life and are engaged in meaningful activities?

Cartoonist Stephan Pastis tends to poke fun at cyclists in the form of a recurring character known as Jef the cyclist who is portrayed as a very athletic and fit person who is always smugly giving unsolicited advice to others about how they they should exercise and eat. 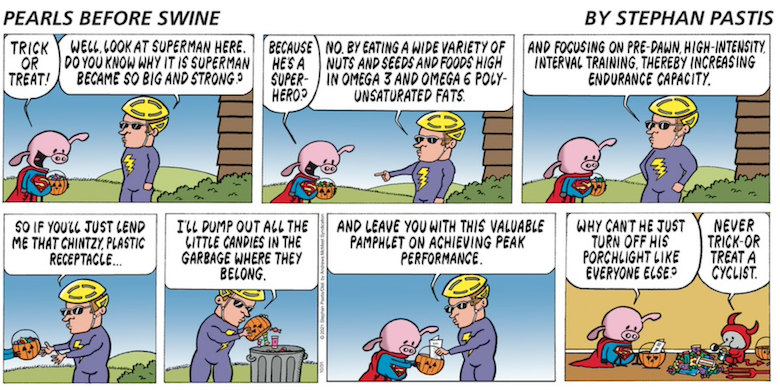 Remember the fuss when the Norwegian women’s beach handball team was fined by the European Handball Federation during a tournament because their players ditched the regulation bikini bottoms in favor of shorts? In response to the charges of blatant sexism (since men were allowed to wear shorts), the EHF has quietly changed its regulations.

The International Handball Federation has responded to widespread accusations of sexism by changing its rules around women’s uniforms to allow bike shorts and tank tops instead of bikini bottoms and crop tops.
…

At some point over the past month the IHF has quietly altered its regulations for beach handball, which now stipulate that “female athletes must wear short tight pants with a close fit”. Male athletes can still wear regular shorts as long as 10cm above the knee “if not too baggy”.
…

Female athletes have spoken out against uniform double standards numerous times. Women are required to wear more revealing outfits in several sports, including track and field, beach volleyball and tennis.

In 2011, the Badminton World Federation decreed that women must wear skirts or dresses to play at the elite level in order to help revive flagging interest in women’s badminton.

The new dress codes still seem sexist to me, since they require women to wear ‘short tight pants with a close fit’ while men can wear regular shorts.

I don’t see any reason for any dress code. Players should be allowed to choose team uniforms that enable them to compete at their best while not giving them an unfair advantage over other competitors.

In the T20 cricket World Cup currently being played in the United Arab Emirates, India (a dominant force in all forms of the game) has suffered a shock, losing its first two games to Pakistan and New Zealand and in danger of not qualifying for the playoff round. I mentioned in an earlier post that after their loss to Pakistan, some of the Indian team’s supporters, some of whose devotion border on fanaticism, vented their anger at people who had been cheering for the opposing team. While sports fans turning violent against supporters of opposing teams is sadly only too common in many sports, in India things went even further.
END_OF_DOCUMENT_TOKEN_TO_BE_REPLACED