I read and watch detective stories a lot. I think it is because they are essentially puzzles to be solved and I am a puzzle solver at heart. I enjoy all kinds of puzzles. A ‘puzzle’ for me is any problem for which I think there should be a solution that lies within my grasp and ability. This is also the likely reason I was drawn to science because much of that also involves puzzle solving. In my spare time I do cryptic crosswords and I also play the card game bridge where each hand is essentially a puzzle where a task is set and you have to figure out the best way to reach it.

Over time, I have found that I have clear preferences as to the kind of detective story. They should be lean and spare, where the focus is almost exclusively on how the solution to how the crime was committed is worked out. I prefer that any violence be avoided, or if there is any, for it to take place off-stage with as little graphic detail as necessary. There does does not even need to be a murder. In some Sherlock Holmes stories, not only is there no murder, there is not even a crime but just a mystery to be solved.
END_OF_DOCUMENT_TOKEN_TO_BE_REPLACED

The 2016 film Arrival that I reviewed here involved the sudden arrival of a fleet of alien spaceships at many locations on the Earth and had as a central plot the efforts by a linguist to overcome the language barrier and learn how to communicate with them.

But if we examine a map of all the reported UFO sightings over time, we see that almost all of them are in the English-speaking world, primarily the US and UK. This clearly shows that aliens also worry about communicating with us and have chosen to visit just those regions where the natives speak a language they understand, and that is English. 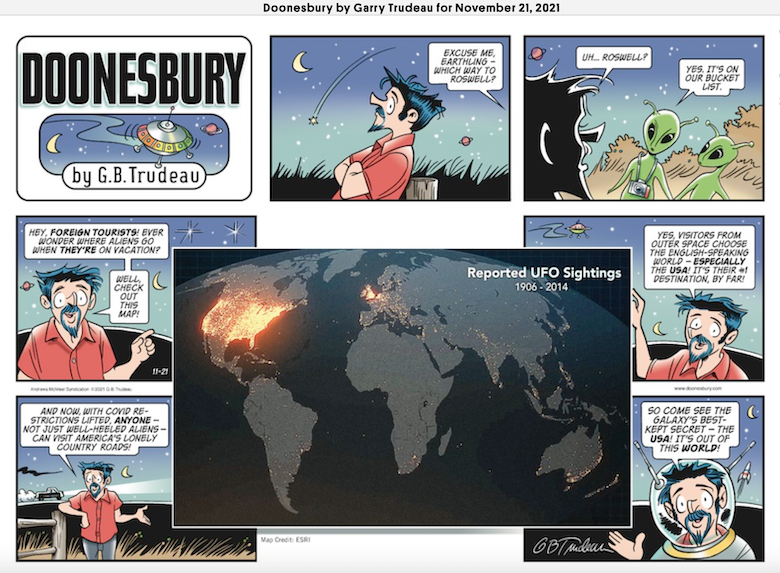 In the US where we are inundated with stories of the lifestyles of the rich, it should not be surprising that some people dream of joining that group. But most people are not born into wealth and need to find some way of getting there. Some have an entrepreneurial bent and try to market an idea. The tech world is appealing and the person who is held up as a model is the founder of Apple, Steve Jobs. If you do not have an idea for a product or the stomach to do all the work of developing one, the next best thing is to identify someone who has and become an early investor so that one can reap the benefits if and when the product becomes wildly successful.

But identifying good ideas in the early stages is a gamble, especially if one is unfamiliar with the world in which it operates. What may seem like a terrific idea can turn out to be a smoke-and-mirrors exercise in which someone with very persuasive skills manages to convince rich people who lack the technical knowledge to cough up lots of money by promising a product that will revolutionize the field. The FOMO (Fear Of Missing Out) phenomenon can be a useful lever of persuasion, where people fear that by not investing, they may be missing out on the equivalent of the next Apple.
END_OF_DOCUMENT_TOKEN_TO_BE_REPLACED

Big companies like Amazon, despite making huge profits for its owners and shareholders, fight tooth-and-nail to prevent their employees from forming unions that could help provide better pay and working conditions.

In another excellent episode of Last Week Tonight, John Oliver describes the lengths the companies will go to fight unionization.

Henry “Enrique” Tarrio, the leader of the far right group known as the Proud Boys, is currently serving a five-month prison sentence but has asked a judge to release him early because of the terrible prison conditions.

Henry “Enrique” Tarrio is serving a five-month sentence for stealing and burning a Black Lives Matter banner from a historic Black church in the capital, after Donald Trump’s election defeat.

On Monday, Tarrio asked a judge to release him, arguing that he has been exposed to inhumane conditions.

Asking that his sentence be reduced or that he be allowed to complete it under house arrest, he claimed to have been harassed by correctional officers and said his cell regularly floods with dirty water from a toilet in a neighboring cell.
…

Tarrio described abusive guards, smoke-filled hallways and medical neglect, saying he witnessed a prisoner have a seizure who lay for a half hour before help arrived.
…

According to his attorney, Tarrio has endured “serious abuses of his rights on a daily basis”, including jail employees repeatedly ignoring his requests for medical treatment, throwing cold, often inedible meals into his cell and denying access to running water.

“Mr Tarrio has been intimidated and antagonized by correctional staff to dissuade him from making complaints about the horrendous conditions,” Tarrio’s attorney, Luca Dansie, wrote.

Tarrio is hardly a sympathetic figure except to those on the far-right but that does not mean that he deserves to be subjected to the terrible conditions that exist in many US prisons. Nobody does. The fact that he is a high profile figure with access to the media has the benefit of bringing these conditions into the public eye. Perhaps prison reform is one issue where both the left and the right can get together and actually achieve something worthwhile. It is long overdue.

As the search for WIMPs (Weakly Interacting Massive Particles) continues to be fruitless, advocates for alternatives to dark matter (such as Modified Newtonian Dynamics or MOND theories) to explain cosmic puzzles have been encouraged. But if the history of science is any guide, we should not expect the larger community of scientists to quickly embrace these alternative theories. This is because once a paradigm becomes dominant, as dark matter has, then it will not be dislodged until most of the variations within that framework have been explored and rejected. In the case of dark matter, a fresh search for WIMPs has been launched using extremely sensitive detectors that, if they still fail to detect them, will likely result in WIMPs being ruled out.
END_OF_DOCUMENT_TOKEN_TO_BE_REPLACED

I am getting weary about hearing of all the ways that our devices are spying on us. The main ways in which we give away information are the sites that we visit and the searches we make. But we know about those and have grudgingly come to accept them as facts of life and the price we pay for the conveniences they provide. But there are other, more disturbing aspects, like that the cameras and the microphones on our devices may be surreptitiously recording us.

If you think your smartphone is spying on you, you’re probably right.

Apps are designed to track your moves, and your phone’s microphone can be picking up your conversations.

So if you’re suddenly bombarded with ads on your social media for things you’ve never searched for but have spoken about, it’s no coincidence.
END_OF_DOCUMENT_TOKEN_TO_BE_REPLACED

Fox News personality Laura Ingraham is an awful person similar to Tucker Carlson, using her show to promote the most hateful views. To appreciate this clip, all you have to know is that there is apparently a show on Netflix called You that she has clearly never heard of. (I had never heard of it either but I am notoriously clueless when it comes to popular culture.)

And this, everyone, is the greatest video of all time: pic.twitter.com/Kf3jHXUliQ

I predicted that once Donald Trump was out of office, his ability to draw large crowds to his rallies would diminish as people wearied of hearing the same stuff over and over again. It looks like I was wrong. He has been holding allies like the one in Iowa that drew a large audience. Since this is the first state to vote in presidential primaries, his visit was seen as an indicator that he plans to run again. He spoke for almost two hours, devoting much of it to the well-debunked claims that he only lost the election due to fraud. The fact that so many people would devote such a large amount of time to attend an event and listen to him saying what he has said many times before shows that his hold on the Republican party remains strong.
END_OF_DOCUMENT_TOKEN_TO_BE_REPLACED