The news about South African scientists detecting a new variant of the covid-19 virus that has been labeled the ‘Omicron’ has been worrying to say the least. What has caused scientists and the WHO to express concern is the large number of mutations that it has, over 50 overall and more than 30 on the spike proteins that the virus uses to invade out bodies’ cells. That makes it hard to predict what it can and will do without further study. But it is far too early to press the panic button.

There have been many examples of variants that have seemed scary on paper, but came to nothing. The Beta variant was at the top of people’s concerns at the beginning of the year because it was the best at escaping the immune system. But in the end it was the faster-spreading Delta that took over the world.

Prof Ravi Gupta, from the University of Cambridge, said: “Beta was all immune escape and nothing else, Delta had infectivity and modest immune escape, this potentially has both to high degrees.”

END_OF_DOCUMENT_TOKEN_TO_BE_REPLACED

He manages to work in four puns into a single panel. Impressive! 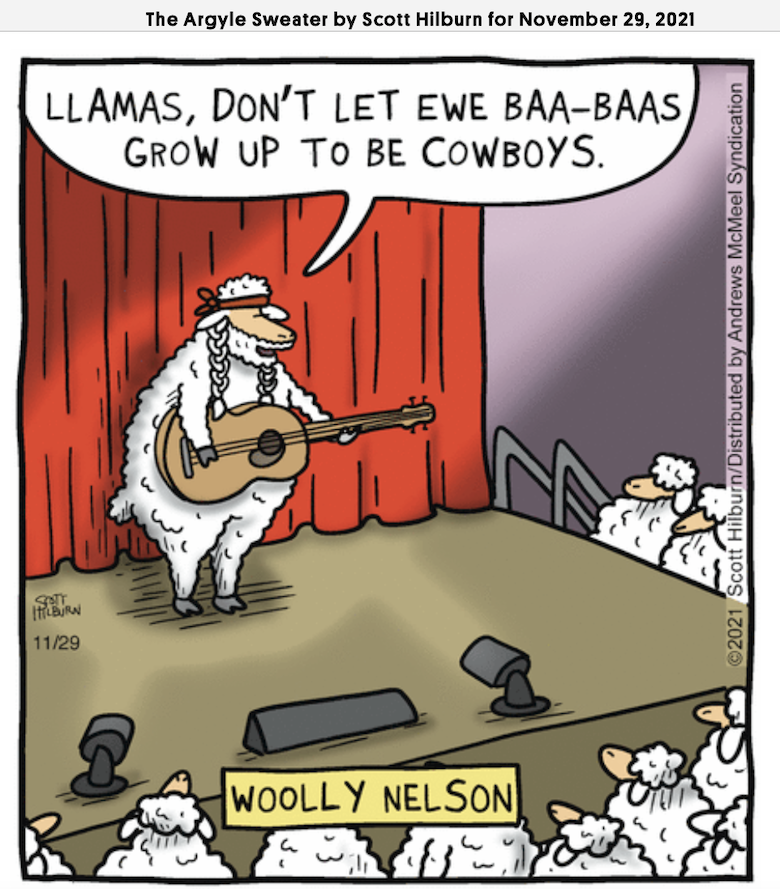 I keep getting reminded of how unreliable memories can be, especially about things that happened a long time ago. While forgetting details and even entire incidents are common, more concerning is when we ‘remember’ things that did not happen. The latest such incident occurred when a few days ago I was watching the 1947 film The Secret Life of Walter Mitty starring Danny Kaye. I was a huge fan of Kaye’s comedies as a boy, which often showcased his ability to sing comic songs, and this film had two of them. I recall watching it a long time ago and enjoying it so when I saw that it was streaming, I decided to take a second look.

The film is about a timid, milquetoast of a man who is bullied by his mother, his boss, and his fiancee and who escapes into daydreams where he is the hero of adventures. Like so many films that we recall from our childhood, it did not age well. (It was remade in 2013 with Ben Stiller in the title role). I would have stopped watching after about ten minutes but what kept me going was that I distinctly recalled that right at the beginning, while he is waiting at a traffic light, he daydreams that he is the pilot of a military plane that is flying through a major storm. Despite the dangerous conditions and the plane being buffeted by the strong winds, he remains calm and collected and his crew admiringly tell each other that they are confident that he is the one person who can pull them through. In the background, the engine makes a ta-pocketa-pocketa-pocketa sound, a recurring background machine sound in almost all his daydreams.
END_OF_DOCUMENT_TOKEN_TO_BE_REPLACED

Samantha Bee explains how the anti-aging industry and celebrities perpetuate false and dangerous myths about anti-aging techniques that sucker people into thinking that they too can look as young as those people.

There are many films, too many to name and I am sure each one of us have our favorites, about grand heists, where an elaborate plan is made to steal something extremely valuable. The films are similar in the way that the place to be burglarized is carefully cased to take place when the place is closed, and the details of the security precautions carefully noted so as to find a way to enter and take take the goods without alarms going off and escape without being detected until much later when the thieves are well away from the scene of the crime and have got rid of any incriminating evidence and disposed to the goods. Much of the fun in these films (such as in The Italian Job) is seeing the planning and execution of the heist with split-second precision.
END_OF_DOCUMENT_TOKEN_TO_BE_REPLACED

When it comes to the calendar, there are only two things that are fixed by nature that we have no control over: the length of the day and the length of the year as approximately 365¼ days. All the other divisions are purely arbitrary. While some cultures have calendars that ascribe significance to the lunar months that last approximately 28 days, it is safe to say that we can safely ignore it. How many of us keep track of the lunar phases from day to day anyway? But despite the fact that we can subdivide the days in the year in any way we like, we have arrived at a system that makes little sense. We divide the year into four months of 30 days each, seven months of 31 days each and one month of 28 days, becoming 29 in a leap year.

But the really weird thing is the length of the week as seven days. As a result of the present system, any given date will fall on a different day of the week from year to year, which makes long term planning of events more difficult.
END_OF_DOCUMENT_TOKEN_TO_BE_REPLACED

We live in an age where many people are fleeing their native lands and seeking refuge in other countries. The causes for the creation of so many refugees are many, the most common being wars, economic hardships caused by climate change, and fears of persecution either as individuals or as members of some minority community that is being targeted by the majority community with the government either not doing anything about it or even condoning the abuses.

While I am technically not a refugee, I left Sri Lanka with my family because I fell into the last category. As such, it gives me a small window into the refugee mindset and know that leaving one’s country and all that is familiar for another land where one has to start afresh, sometimes not even knowing the language, is a very difficult decision, not made lightly. Hence refugees should be treated with compassion. But sadly that is often not the case. It is easy to view refugees as somehow threatening and many politicians have used them as an easy target to inflame nativist tendencies in the population to create hostility to the refugees.
END_OF_DOCUMENT_TOKEN_TO_BE_REPLACED

Today is Thanksgiving day in the US.

Americans seem to have a love-hate relationship with this holiday. In many families it seems to be anticipated with dread at the thought of a large number of family members who do not share the same views and often do not get along with each other being expected to share a very long afternoon and evening together that can end up with arguments. And yet to not turn up can also cause problems, so it is a lose-lose proposition.

This Saturday Night Live sketch uses the framing of a Target advertisement to make this point.

END_OF_DOCUMENT_TOKEN_TO_BE_REPLACED

I have been casually following the story about non-fungible tokens (NFTs) but had little idea what they were other than that an NFT was some form of digital work that one could own. The radio program On the Media had an entire show where they talked about it and that rekindled my interest and gave me some idea about this new world of speculation.

Host Brooke Gladstone discussed NFTs with Anil Dash, one of the people who in 2014 developed the idea that led to NFTs. Dash says that he and an artist friend Kevin McCoy did this as a blockchain-backed means for artists to assert ownership over their digital work. Dash now says that that initial goal of creating ownership rights for artists seems to be in danger of falling by the wayside, to be replaced by the kinds of speculative behavior that we have seen before with bubbles.
END_OF_DOCUMENT_TOKEN_TO_BE_REPLACED