An interesting question is how many solar panels would be necessary to meet all our energy requirement and how much land would that require. The answer to that question is not a simple case of taking the total energy consumption, dividing by the amount of energy produced by a panel, and multiplying by the area of the panel. That back of the envelope calculation would give us about 8 million acres for the US alone.

There are many complicating factors involved, and a VFX artist uses his skills to explain the problem and get a reasonable estimate.

He concludes that to power the world, we would need an amount of land the size of France. Of course, these estimates will change with improvements in solar cell technology and changes in energy use.

One thing I learned from the video is something called a Sankey diagram, which is a type of flow chart in which the width of the arrows is proportional to the flow rate, providing an easy-to-see visualization of how much energy comes from what source and where it goes. I had seen some diagrams before but had not known that they had their own name.

Here is one that shows the state of energy usage in the US as of 2019. There is a lot of rich information in that single diagram. (The ‘quad’ as a unit of energy is defined here.) 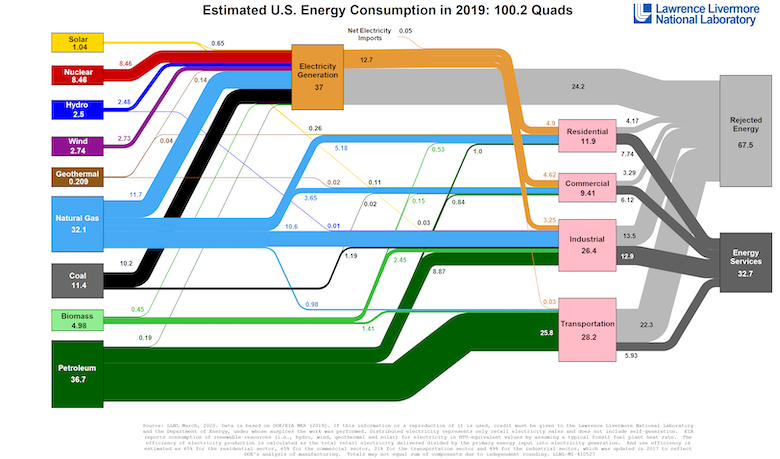 While only about 1% of the energy use in 2019 comes from solar, it is growing.

Continuing a trend first observed in 2018, in 2019, the largest increases in energy supply came from natural gas, wind and solar energy, with jumps of 4%, 10% and 8%, respectively. “Solar energy supply exceeded 1 quad for the first time ever as more users turned to renewables. Wind and solar combined now produce more electricity than hydroelectric power, which dominated renewable energy for decades,” the lab noted.

“Solar and wind continue to show year-on-year growth, which is an impressive change for the energy system,” said A.J. Simon, associate program leader for Water Security and Technologies at LLNL. “Other energy resources, such as hydropower, nuclear energy and geothermal have trended flat over the past decade, despite visible annual fluctuations.”

We see that an astounding 67.5% of energy is ‘rejected’, i.e., is dissipated as heat. Some loss of energy as heat is inevitable and in general the more energy that is produced and used, the more that will be rejected. While some of the energy is rejected in the course of power generation, most of it occurs during the end use. But here too there is some improvement.

Last year, 67.5 quads was rejected—1 quad less than in 2018 (which is about the same amount of solar energy consumed in 2019). That bucks a trend in which over the past five years, rejected energy has grown in tandem with increased energy use. In 2014, for example, total rejected energy stood at 59.4 quads.

The bulk of rejected energy, however, typically takes the form of waste heat, “such as the warm exhaust from automobiles and furnaces. The efficiency of the nation’s cars, lightbulbs and factories determines how much waste heat is produced and how much fuel and electricity can be put to productive use,” LLNL said.

The ultimate goal would be to have 100% of our energy needs met by renewable sources. Solar energy costs are dropping rapidly and that might be a bigger danger to the fossil fuel industry than the divestment movements.