While we are still in the Thanksgiving weekend, I thought I would have a turkey-related post. I wrote recently about the aggressive turkeys that hang around the place where I live and to whom I give a wide berth. Just recently, I was out for my walk and saw about ten of them spread out across the width of the street and slowly coming towards me. It was rather like those scenes in westerns where a gang of bad guys ride into town, park their horses, and then walk slowly down the main street to show that they are the boss. Like the residents in those towns who quickly move out of the way so as not to become a target of the gang, I too ducked into a side path and waited there until the turkeys strolled slowly past before coming out again and continuing on my way. I was not the only one taking evasive action. Two women with a young boy came out of their home, saw the turkeys, and quickly went back in and one of them advised me to take another route.

But those turkeys were nowhere near as aggressive as this one named Gerald that used to hang out in a rose garden in Oakland, CA. It seems like if you lock eyes with it, it will chase and attack you.

The reports were often similar: Gerald would spot an unsuspecting victim from across the garden. He would take off running, either chasing them away or, if they stood their ground, mounting and scratching them until they fled. He often targeted the young and older people – those who could not quickly outrun him. He seemed particularly attracted to wheeled vehicles including, unfortunately, baby strollers.

When angry, he puffed up his chest, towering over 4ft tall. And despite his bulk, he was swift – a typical adult male turkey can weigh up to 25lbs, run at 25mph, and fly at up to 55mph. Wild turkeys have a 270-degree field of vision and can see three times more clearly than 20/20 – making it easy for Gerald to spot his victims from across the garden.
…

Attacks from the turkey became so common that some people would not enter the rose garden without a weapon: a stick, a rake, or an umbrella were widely suggested. One person said he used pepper spray. Some people stopped going to the park altogether.

Even those who stayed out weren’t safe. Julia Williams, who lives nearby, describes a typical encounter with the bird. “I was carrying a basket of laundry to my car when we saw each other,” she recalled.

“Once we locked eyes he sprinted towards me, wings outstretched. I just barely made it to my car but completely threw my back out in the process. I was in bed unable to walk for over a week.”

Gerald was once a mellow guy, often seen standing in line with people waiting at the casual carpool, a community-driven ride sharing service, or calmly stalking around the fountains of the garden.

But in late 2019 or early 2020, he started to change. “This is not normal behavior,” said Alan Krakauer, a turkey behavior expert. 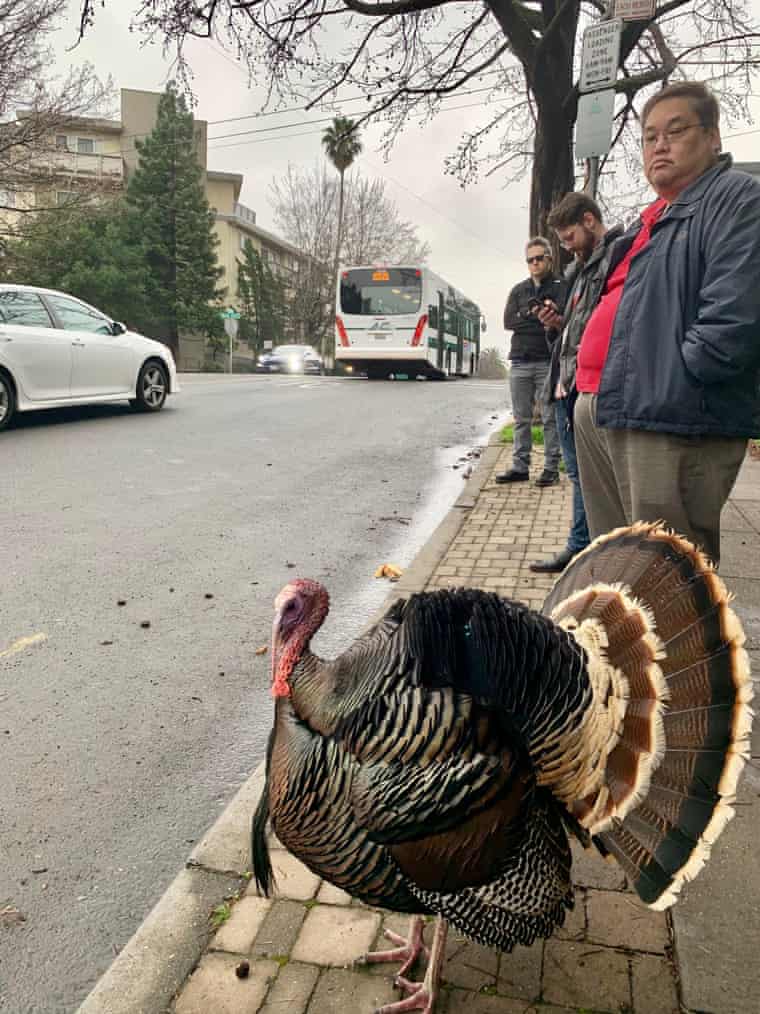 Gerald pictured standing in line with carpoolers in Oakland, in the days before his behavior turned aggressive. Photograph: Courtesy of Meghan Bennett

So what happened? What caused a friendly turkey to become a serial attacker? It is not clear and there are passionate debates as to the causes and what should be done.

Nancy Friedman, a longtime resident and neighborhood “lead” on Nextdoor, said she had never seen such a divisive topic on the platform, “with people attacking each other more often than the turkey attacked people”.
…

Discussions quickly turned nasty. Some in the pro-Gerald camp wanted to cede the garden entirely to the bird. “Lose the garden, keep the turkeys,” one person said. Meanwhile, the anti-Gerald camp lobbied to have him euthanized or otherwise removed as soon as possible. “Relocate the turkey to the wild, or cook him for Thanksgiving,” one comment said.

At one point, the city decided to euthanize Gerald and that was due to happen on June 22 but that plan was shelved because of the uproar from the pro-Gerald camp who created a petition that quickly gathered over 13,000 signatures. So they decided to capture him and relocate him. But even capturing him was extremely difficult and after they finally did so and moved him to the hills of the nearby city of Berkeley, within a week he had found a new park nearby. He was now so famous, like Billy the Kid, that he was recognized and had to be captured again and taken, as if in the witness protection program, to an undisclosed location.

The lesson seems clear: You don’t mess with turkeys in general and definitely not with Gerald.