As has been pointed out, the number of confirmed cases will rise along with the increased number of testing so another metric is the positivity rate , which is the number of tests that come back positive. It is illustrative to look at how that is changing. 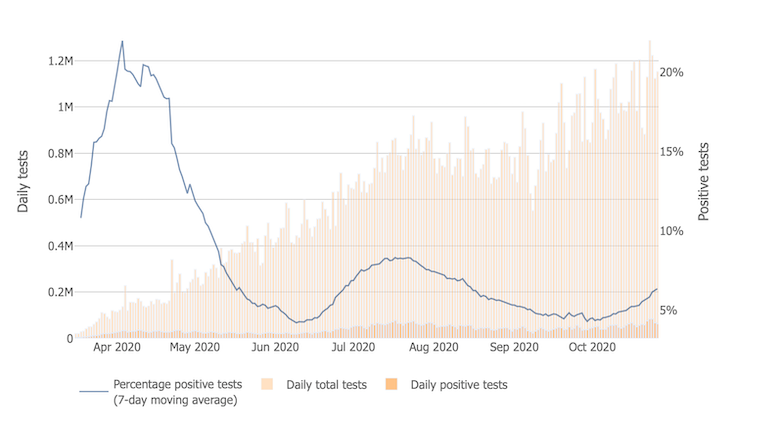 We see that while that number dropped sharply from its first peak of 22.1% in April when the number of tests were low and given mainly to people with symptoms, there was a second lower peak of 8% in August but now it is rising again to 6.2% now.

Another metric is hospitalization rates and here too we see a similar pattern. 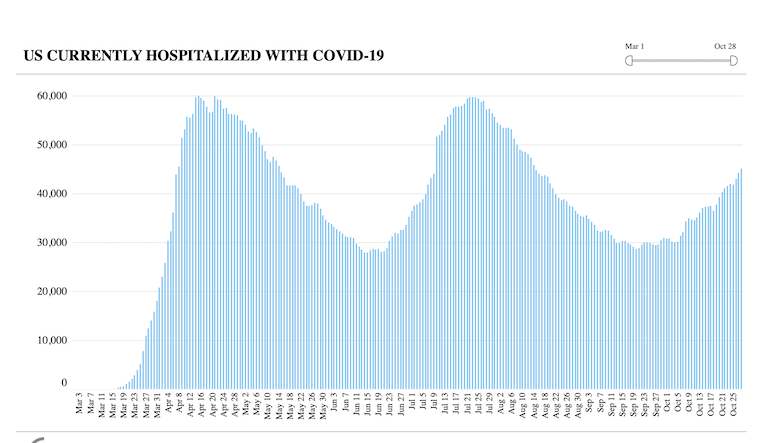 An additional problem with hospitalizations is that many of the initial outbreaks occurred in large metropolitan areas that had significant hospital capacities. By cutting down on all other treatments they could release beds for covid-19 cases. In the current surge, the virus has spread to less dense and rural areas that do not have that many beds and so reach capacity much more quickly.

As new COVID-19 cases surge across the country, hospitals in Rocky Mountain states are among those struggling to keep up. In Utah, hospital leaders have told the governor they’re on the cusp of rationing access to intensive care beds. Idaho and Montana doctors are having trouble finding places to treat infected patients.
…

Both Idaho and Montana have been seeing record hospitalization numbers, too. Neither state has a medical school, so they don’t have a big academic medical center. And they rely on the University of Utah and other places with bigger facilities to take their tougher cases. So if Salt Lake hospitals are full, that means they have to look elsewhere. In Montana, one small town hospital reported that they had to call five different hospitals before they found one 600 miles away that had some room. A hospital in northern Idaho is now sending patients to Portland, Ore., for help. And Wyoming is now among the top five states for new infections per capita, too.

The number of weekly deaths is another metric still well below the first peak of 15,700 set back on April 24 and below the second peak of 8,00o back on August but it has been edging up since October 18 and now stands at 5,600.

All four metrics show definitely that we are currently in the third wave of the virus, and have not yet reached its peak, Trump’s boasts to the country notwithstanding.