Now that the UK has left the EU, racists and xenophobes there feel encouraged to be more open about their hostile feelings towards immigrant communities and people of color and speakers of other languages, assuming that they do not belong there, similar to Donald Trump supporters here.

A poster telling residents of a block of flats “we do not tolerate” people speaking languages other than English in the building has been reported to police.

The typewritten poster, bearing the title “Happy Brexit Day”, was reportedly found stuck to fire doors in Winchester Tower in Norwich on Friday morning. The discovery came hours before the UK officially left the European Union at 11pm later that day.

A photo of the poster shared in news reports and on social media revealed that it declared: “We finally have our great country back.” 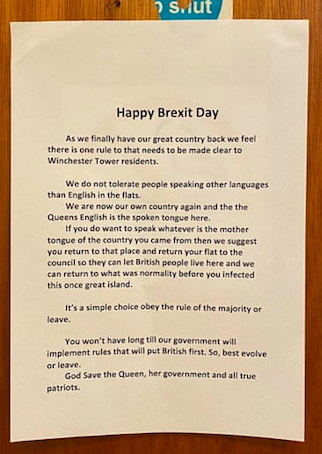 As is usually the case, the people who are such fans of the ‘Queen’s English’ made errors in writing their screed. They also do not realize that their dream of making the UK white again is simply not going to become reality.