Wherever whales, the largest living things on earth, are found, so are populations of some of the smallest, phytoplankton. These microscopic creatures not only contribute at least 50 percent of all oxygen to our atmosphere, they do so by capturing about 37 billion metric tons of CO2, an estimated 40 percent of all CO2 produced. To put things in perspective, we calculate that this is equivalent to the amount of CO2 captured by 1.70 trillion trees-four Amazon forests worth-or 70 times the amount absorbed by all the trees in the US Redwood National and State Parks each year. More phytoplankton means more carbon capture.
…

This is where the whales come in. If whales were allowed to return to their pre-whaling number of 4 to 5 million-from slightly more than 1.3 million today-it could add significantly to the amount of phytoplankton in the oceans and to the carbon they capture each year. At a minimum, even a 1 percent increase in phytoplankton productivity thanks to whale activity would capture hundreds of millions of tons of additional CO2 a year, equivalent to the sudden appearance of 2 billion mature trees. Imagine the impact over the average lifespan of a whale, more than 60 years. 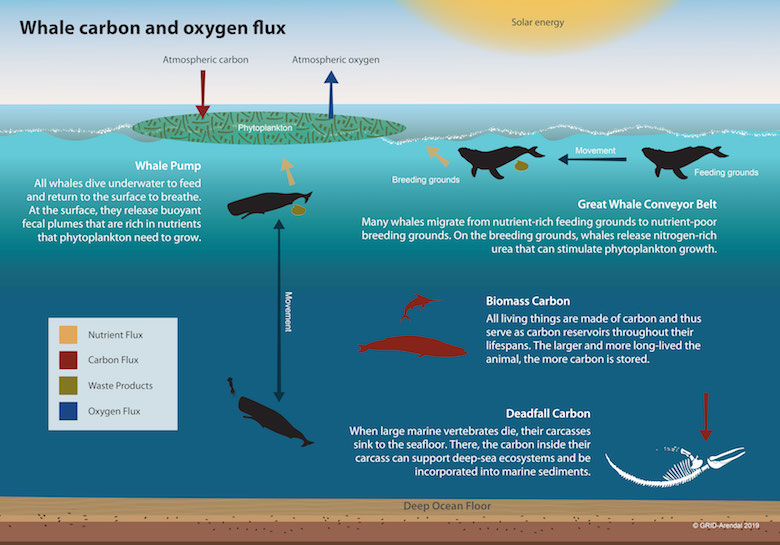 Why is the IMF publishing this? It turns out that there is serious monetary value in whales.

To solve this international public goods problem, we must first ask, What is the monetary value of a whale? Proper valuation is warranted if we are to galvanize businesses and other stakeholders to save the whales by showing that the benefits of protecting them far exceed the cost. We estimate the value of an average great whale by determining today’s value of the carbon sequestered by a whale over its lifetime, using scientific estimates of the amount whales contribute to carbon sequestration, the market price of carbon dioxide, and the financial technique of discounting. To this, we also add today’s value of the whale’s other economic contributions, such as fishery enhancement and ecotourism, over its lifetime. Our conservative estimates put the value of the average great whale, based on its various activities, at more than $2 million, and easily over $1 trillion for the current stock of great whales.

This article from National Geographic has more.

While they are alive, whales might do even more to capture carbon, thanks to their jumbo-sized excrement. Great whales feed on tiny marine organisms like plankton and krill in the ocean’s depths before surfacing to breathe, poop and pee-and the latter activities release enormous plume of nutrients, including nitrogen, phosphorus, and iron, into the water. So-called poo-namis stimulate the growth of phytoplankton, marine algae that pull carbon out of the air via photosynthesis.

When phytoplankton die, much of their carbon gets recycled at the ocean’s surface. But some dead phytoplankton inevitably sink, sending more captured carbon to the bottom of the sea. Another study from 2010 found that the 12,000 sperm whales in the Southern Ocean draw 200,000 tons of carbon out of the atmosphere each year by stimulating phytoplankton growth and death through their iron-rich defecations.

While this is undoubtedly interesting, I would like to see this study being subject to very critical analysis. One of the things about studies is that one must take into account who is doing it, who is funding it, and who is publishing it. This study comes out of the IMF and has been published by them but has not as yet been peer-reviewed by a reputable journal . The international business community resists any attempts to reduce carbon emissions because of the costs involved. You can see why they would seize on an idea that not only would appeal to the increasingly environmentally minded public (who doesn’t want to save the whales?) but also lets them off the hook for their role in creating the problem and of their obligations to solve it.