One of the charges made against Bernie Sanders by his critics (and was made by Hillary Clinton’s supporters during the 2016 campaign) is that he has been insufficiently sensitive to the concerns of women. But he has always been a stalwart defender of the rights of women right from the beginnings of his political career.

This short video from his campaign seeks to set the record straight.

"Bernie was fighting for a woman's right to choose before I was born."

"Lifting the floor to a living wage would help millions of women."

"He's on our side and always has been."

Hear why these women are with our campaign. pic.twitter.com/ahuLvN0BfW

I had never heard about Dominic Cummings and the pivotal role he had played as the chief strategist in the Leave campaign on Brexit until I saw the film Brexit that starred Benedict Cumberbatch as Cummins that I reviewed here. Cummings was instrumental in using micro-targeting of voters and promoting the nationalistic idea that the UK had thrown away its sovereignty by joining the EU and that it was time to take back control. He also promoted the lie that the UK was sending 350 millions pounds to the EU every week and by leaving they could us all that money for the much-beloved National Health Service.
END_OF_DOCUMENT_TOKEN_TO_BE_REPLACED

I like to sleep and can usually fall asleep pretty easily, unless there is something major that is bothering me. When I was still working, I had to get up early in the morning but now that I am retired, I luxuriate in waking up around that same time, but then rolling over for a couple more hours. The duration and quality of one’s sleep seems to be related to other health issues and so researchers have been looking at what we can learn about the role of sleep.
END_OF_DOCUMENT_TOKEN_TO_BE_REPLACED

Cartoonist Ruben Bolling brings back his Calvin and Hobbes homage and accurately captures the boy president and imaginary publicist John. 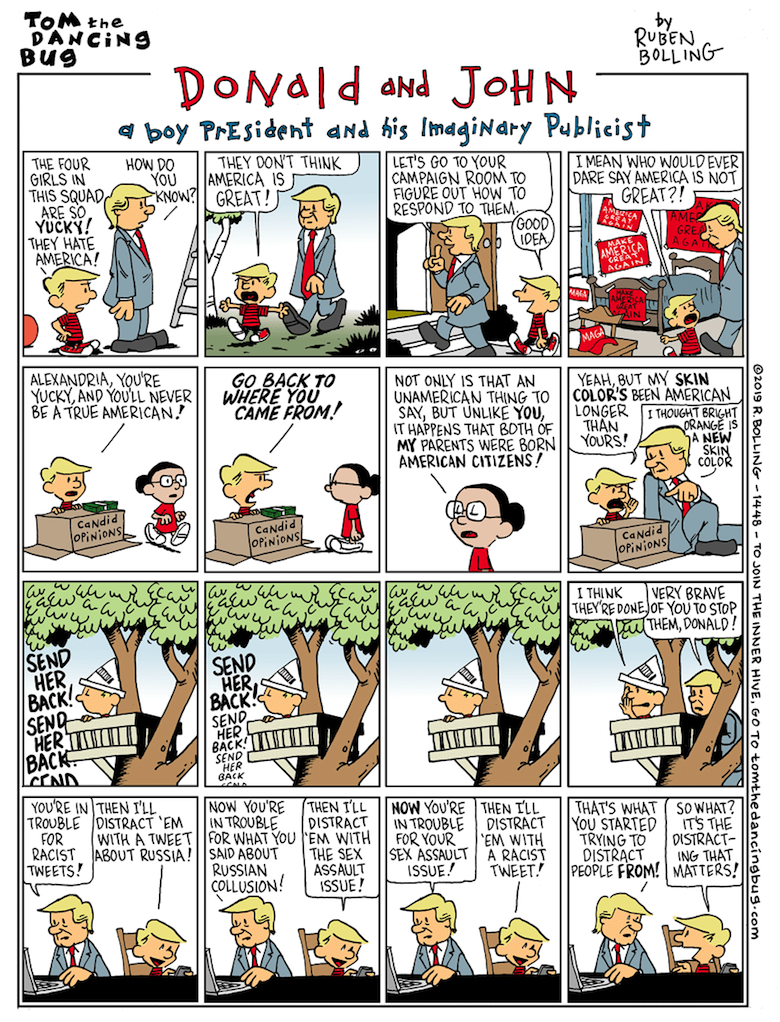 In checking over the proofs for my forthcoming book, I have also been checking the citations. One of my citations was to a quote from an essay by MIT physicist Seth Lloyd. The quote I used was “Unlike mathematical theorems, scientific results can’t be proved. They can only be tested again and again until only a fool would refuse to believe them”. It appeared in a compilation of short essays in a 2006 book titled What We Believe but Cannot Prove: Today’s Leading Thinkers on Science in the Age of Certainty that consisted of contributions from more than 100 people who were asked to write a few paragraphs on the following prompt:

Great minds can guess the truth before they have either the evidence or arguments for it. (Diderot called it having the “spirit de divination.”) What do you believe is true, even though you cannot prove it?

END_OF_DOCUMENT_TOKEN_TO_BE_REPLACED

The faux British journalist occasionally targets his rants at US politics and politicians and Donald Trump’s naked racism revealed in his tweets against the four congresswomen of color and the muted reaction by some politicians in the UK and US caught his attention. (Language advisory)

The Democratic party leadership has a lot more in common with Republicans and the Trump administration than it has with its own base and hence it should not come as a surprise that it finds ways to maneuver against policies that its supporters want but goes against the interests of the ruling classes. This struggle has come into the open as progressives are launching primary challenges against veteran Democratic lawmakers and the latter scramble to find ways to defend their penchant to ally with Republicans tio undermine the progressive agenda.
END_OF_DOCUMENT_TOKEN_TO_BE_REPLACED

Tomorrow special counsel Robert Mueller will be testifying before congress and there is intense speculation about what he might say. You can bet that the Democrats will be trying to get him to imply that Russian meddling in 2016 helped elect Donald Trump over Hillary Clinton.

I think that we can all agree that it is wrong for one nation to meddle in the elections of another nation in order to sway it in favor of someone they feel will be of benefit to them. But what is problematic is the way that Americans sanctimoniously condemn such actions when other nations do it to them but think it is perfectly fine when the US does the same thing, and worse, to other nations.

Mehdi Hasan provides a brief history of the utterly egregious meddling that the US has done in other countries (including Russia) that go well beyond email hacks and Facebook fake news that the Russians are accused of doing. And of course that does not even include things like sponsoring coups, assassinating other countries’ leaders, and actual invasions.

The above Pickles cartoon will resonate with those of us who have canine companions. (The whole week starting on June 24 features this storyline.) But do dogs really know that they have done something wrong and do they have guilty looks?
END_OF_DOCUMENT_TOKEN_TO_BE_REPLACED

I found these two cartoons to be sharp commentaries on the times we live in.

First we have Pearls Before Swine on the menace of Amazon.

Then we have Non Sequitur about how the ubiquity of cameras and social media can serve as a brake on bad behavior.