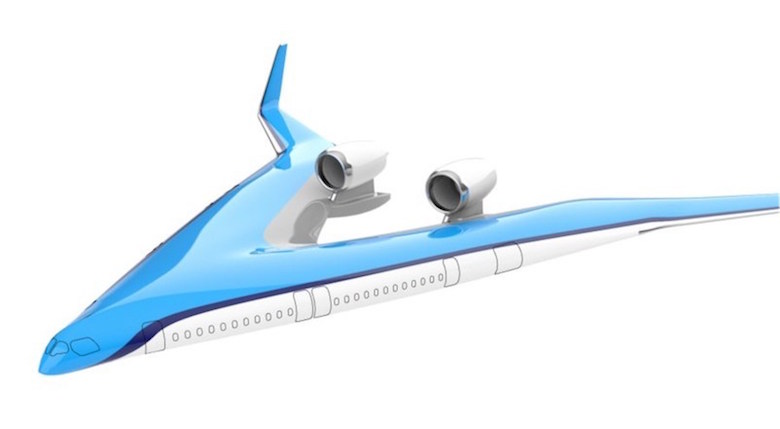 KLM claims that the new design has greater energy efficiency.

Intended to improve the sustainability of air travel, the Flying-V was conceived by Justus Benad, then a student at the Technical University of Berlin, and developed by researchers at Delft University of Technology in the Netherlands, also known as TU Delft.
…

It’s claimed the plane will use 20% less fuel than the Airbus A350-900 while carrying a similar number of passengers — the Flying-V will seat 314, while the Airbus A350 seats between 300 and 350. The design also mirrors the A350’s 65-meter (213 feet) wingspan, enabling it to use existing airport infrastructure.
…

“We’ve been flying these tube and wing airplanes for decades now, but it seems like the configuration is reaching a plateau in terms of energy efficiency,” [TU Delft project leader Roelof Vos] said. “The new configuration that we propose realizes some synergy between the fuselage and the wing. The fuselage actively contributes to the lift of the airplane, and creates less aerodynamic drag.”

There is always a tendency to think that the way things have been for a long time must be the only way that things can be. Fortunately it only takes one or a few people to think differently to get us to view things in a new way.