You know the feeling when some people at a party are having a serious conversation and another person who knows nothing about the subject tries to force themselves into the group by making an inane comment and then smiling in a self-satisfied manner and the conversers, not wanting to tell the person to get lost because that person may be the self-important child of someone else at the party, instead freezes that person out using their body language?

That happened at the G20 summit when Emmanuel Macron, Theresa May, Justin Trudeau, and Christine Lagarde were talking and such a child butted in.

Ivanka Trump appears to be trying to get involved in a talk among Macron, May, Trudeau and Lagarde (IMF head).
The video is released by French Presidential palace. pic.twitter.com/TJ0LULCzyQ

This cringe-worthy video was released by the French government which suggests that they were sending a message.

We have two answers to the question: Why are there ten commandments when just one would have sufficed? 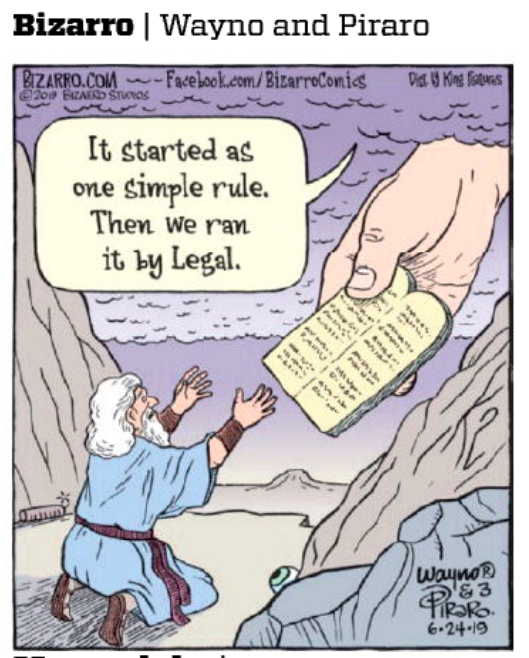 While Non Sequitur offers another.

The recent revelations of the conditions under which migrant families and children are being detained brought the issue once again into the spotlight and has created a furor. One thing that puzzled me was why the Department of Homeland Security and the Customs and Border Protection agency, normally so secretive that they try to prevent reporters and even congresspeople from entering their facilities, allowed the team of lawyers and doctors into the facility, knowing that the conditions were so appalling that even given three weeks notice, what minor improvements they were able to make were never going to bring the conditions up to normal standards of decency.
END_OF_DOCUMENT_TOKEN_TO_BE_REPLACED

According to Rob Beschizza, a man who has the ability to make chain saw noises put that skill to good use.

If the success of a primary candidate’s debate performance is measured by the difference in interest and awareness by the political class from before and after the debates, then there is no question that self-described “bitch for god” Marianne Williamson is the easy winner even if, and maybe because, few had any idea of what she was doing there or what she was saying. She definitely got the attention of New Zealanders with her response to the question of what would be her first priority as president. Rather than the expected items of climate change or health care or gun control or relations with China, she threw down a challenge to their prime minister Jacinda Ardern.
END_OF_DOCUMENT_TOKEN_TO_BE_REPLACED

I mentioned earlier how jaded we seem to have become about Donald Trump’s behavior that the latest serious allegation of sexual assault by him brought by author E. Jean Carroll got very little play in the major media, apart from a few brief appearances. However, rising anger over this poor coverage has resulted in more attention being paid and for the Times to apologize for its earlier downplaying of the story.
END_OF_DOCUMENT_TOKEN_TO_BE_REPLACED

In the first debate, in the discussion on immigration reform Julian Castro made an issue of the importance of repealing section 1325 of the criminal code and criticized Beto O’Rourke for not calling for such an action. I was curious as to what that was all about and found this article in which Dara Lind explained its significance, saying that it is this section that enables the government to carry out its current policy of separating families apprehended at the border.
END_OF_DOCUMENT_TOKEN_TO_BE_REPLACED

This debate was rowdier than the first with more occasions where speakers ignored the limits on time and moderators’ efforts to pick responders.

So here are my summary reactions followed by more substantive comments.

I knew something about the first before the debate and had a pretty good impression of Buttigieg but not so much about Harris. But all did well in answering questions, in that they were articulate and clear, particularly Buttigieg. I knew nothing about Yang but his call for giving every person $1,000 per month funded by a value added tax was interesting and deserves more attention. Gillibrand’s responses were also largely on point, refreshingly wonky at times, and seemed less canned.

I am not a fan of Biden and tried to not let my bias influence my judgment but I really felt that he seemed flat. I did not know much about Hickenlooper and his distancing himself from socialism turned me off. I really do not know why Williamson is in the race at all.

As I said yesterday, this is a tricky category that requires elaboration because staying the same in my estimation did not mean that I viewed them as the same. As with Warren yesterday, I already had a high regard for Bernie Sanders and that view remained unchanged because he was strong last night. I knew little about Swalwell and Bennet but their performances did not inspire me to know more.
END_OF_DOCUMENT_TOKEN_TO_BE_REPLACED

You would think that the person in the government with the title of Chief of Protocol, who assists the president on overseas trips and briefs the president on protocol, would know proper behavior and practice it. But when you are talking about the Trump administration, all such bets are off. The old norms just do not apply anymore and boorish behavior abounds. But just before Trump left for the G20 summit in Japan, Sean Lawler resigned from the post.

Why? I am glad that you asked. Apparently he was the subject of an investigation for harassment and discrimination. But what jumped out at me was that “Lawler has been accused of intimidating staff and bringing a whip into the office”.

Really? He brought a whip to the office to intimidate his staff? What exactly did he do with it? Crack it when he wanted to get people’s attention? Give people lashes when they did not perform their duties satisfactorily?

He looked at some of the highlights and Donald Trump’s attempts to insert himself into the proceedings, as Trump is wont to do whenever he is not the center of attention.