There have been moves to pass laws in various states that seek to punish people who support the BDS movement by denying them access to government contracts. Glenn Greenwald provides a map that shows the extent of those efforts. 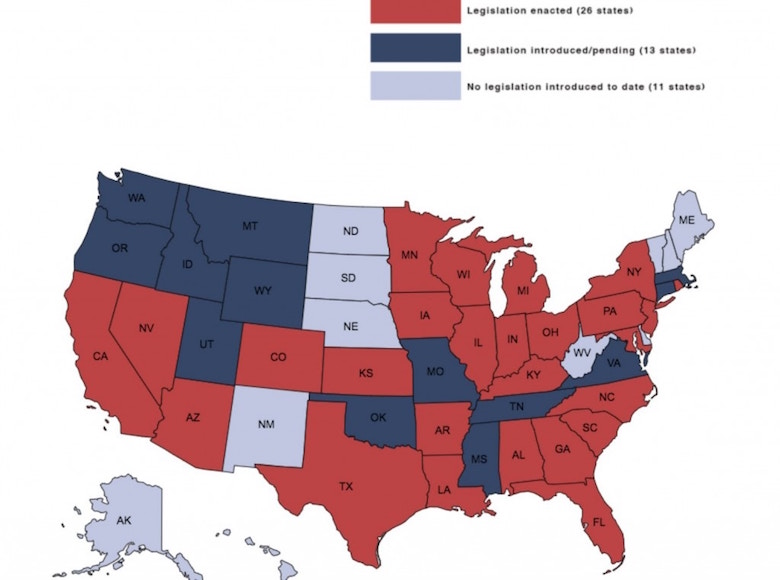 Greenwald writes that a federal judge in Texas has become the third, after judges in Kansas and Arizona, to rule that such state laws punishing people for advocating boycotts of Israel are unconstitutional. The case was brought by five people who were denied contracts with schools and universities in Texas under the law H. B. 89 because they refused to sign contracts that contained anti-BDS clauses.

What makes this ruling particularly important, aside from the fact that it comes from one of the largest states in the country, is that it completely rejected the most common (and most toxic) justification for these laws: that it is not designed to suppress speech or activism against Israel but rather to combat discrimination (namely, anti-Semitism or discrimination against Israelis).
…

As The Intercept has often documented, the attempt to criminalize or otherwise outlaw activism against the Israeli government is easily one of the greatest threats to free speech both in the U.S. and the West generally, if not the single greatest threat. The anti-BDS laws in particular have been rapidly proliferating in the U.S., directly threatening core free speech rights of American citizens in the name of protecting a foreign country.

You can read the opinion here. Here are some highlights, with some citations omitted for clarity.

This case is about whether Texas may prohibit boycotting the State of Israel as a condition of public employment. Plaintiffs in this case are all participants or supporters of the “BDS” movement. The BDS movement-referring to boycotts, divestment, and sanctions-arose in response to Israel’s occupation of Palestinian territory and its treatment of Palestinian citizens and refugees. Modeled after the South African anti-apartheid movement, the BDS movement seeks to pressure the Israeli government to end its occupation of the West Bank, Gaza, and Golan Heights, end discrimination against Arab- Palestinian citizens of Israel, permit Palestinian refugees to return to their homes, and otherwise comply with international law. The BDS movement claims to be nonviolent and opposed to all forms of discrimination, including anti-Semitism and Islamophobia.

It is a content-based restriction because it singles out speech about Israel, not any other country. And it is a viewpoint-based restriction because it targets only speech “intended to penalize, inflict harm on, or limit commercial relations specifically with Israel, or with a person or entity doing business in Israel or in an Israeli-controlled territory.” Tex. Gov. Code § 808.001; (see also Clay Decl., Dkt. 14-2, at 16-19 (reporting statements by the statute’s sponsor and the governor that H.B. 89 is the “anti-BDS bill”)). Accordingly, H.B. 89 is “presumptively unconstitutional and may be justified only if [Texas] proves that [it] [is] narrowly tailored to serve compelling state interests.” H.B. 89 does not survive this scrutiny.
…

Plaintiffs argue that by requiring contractors to certify that they do not and will not boycott Israel, H.B. 89 elicits information about the contractors’ beliefs solely for the purpose of denying them state contracts on the basis of those beliefs. They also argue that the statute’s certification requirement compels contractors to take a public stance on a contentious political issue. The Court agrees.
…

The Court reiterates that this case is about whether Texas may prohibit boycotting the State of Israel as a condition of public employment. It is not about the merits of the significant and contentious public debate surrounding the relationship between Israel and Palestine. In coming to its conclusions, the Court is guided by first principles. “At the heart of the First Amendment lies the principle that each person should decide for him or herself the ideas and beliefs deserving of expression, consideration, and adherence. Our political system and cultural life rest upon this ideal.” Texas has forcefully defended its decision to support Israel, and has emphasized that if is “far from alone” in its decision to enact “anti-BDS” legislation. Twenty five states have enacted similar legislation or issued executive orders restricting boycotts of Israel, (see id. at 3), and Congress has declared its opposition to the BDS movement. In Texas, only five legislators voted against H.B. 89. Texas touts these numbers as the statute’s strength. They are, rather, its weakness. “If there is any fixed star in our constitutional constellation, it is that no official, high or petty, can prescribe what shall be orthodox in politics, nationalism, religion, or other matters of opinion or force citizens to confess by word or act their faith therein.” “[T]he purpose behind the Bill of Rights, and of the First Amendment in particular[,]” is “to protect unpopular individuals from retaliation-and their ideas from suppression-at the hands of an intolerant society.” Thus, “our citizens must tolerate insulting, and even outrageous, speech” in public debate. They must do so “in order to provide ‘adequate breathing space’ to the freedoms protected by the First Amendment.” With H.B. 89, Texas compresses this space. The statute threatens “to suppress unpopular ideas” and “manipulate the public debate through coercion rather than persuasion.” This the First Amendment does not allow.

These cases have not yet gone to the Appeals courts.

Why do people broadcast film and book spoilers? (No spoilers!) » « The new era of living dangerously