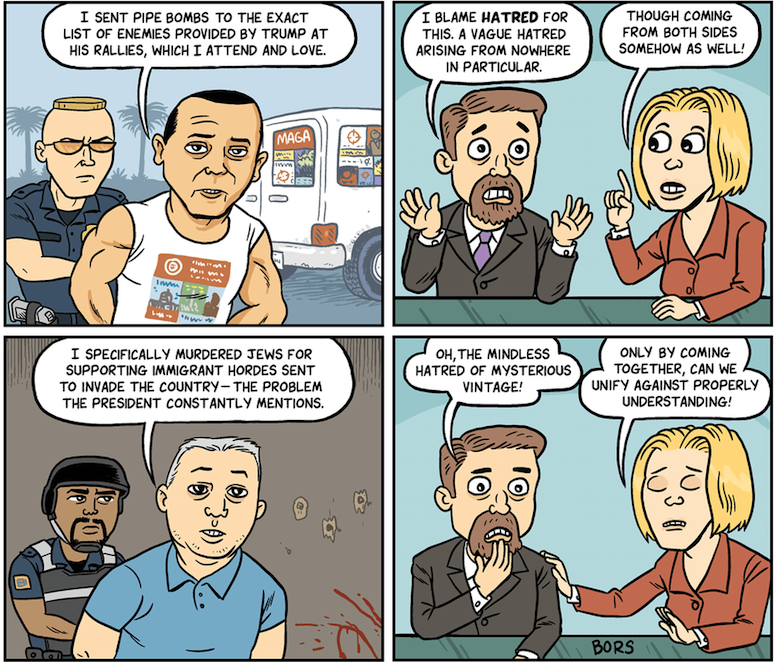 Not that we should be surprised since religious zealots exist in every country and in every religion. In New Zealand, they are upset by the fact that the new speaker of the parliament has dropped references to Jesus in the prayers that open each session of parliament.

Since taking over the role in November last year, Labour’s Trevor Mallard has dropped any reference to Jesus in the prayer which opens the start of every session.

Mallard said he wanted to make the prayer more inclusive for all parliamentarians and the tweak was a “compromise”.

On Tuesday around 1,000 people protested on the steps of parliament house in Wellington, arguing that New Zealand was a Christian nation and Mallard had no authority to axe Jesus’s name.

“He needs a good kick in his pants, and he needs to actually be removed because this is a Christian nation,” protester Rieki Teutscher told Radio NZ. “We don’t share his atheism.”

END_OF_DOCUMENT_TOKEN_TO_BE_REPLACED

Election day in the US is Tuesday, November 6th and I for one cannot wait for it to arrive. Elections drag on for so long here that the period before the voting is really tiresome for many reasons. One is that news coverage of every major event starts by briefly discussing the actual event before pivoting quickly to what the event might mean for the elections. Will it help the Democrats? Republicans? Trump? All this is of course pure speculation. Poll numbers will often be thrown in to support this or that view but drawing a line from events to poll numbers is highly iffy.
END_OF_DOCUMENT_TOKEN_TO_BE_REPLACED

The Onion perfectly satirizes the disingenuous way that Donald Trump endorses the neo-Nazi tropes of his fans while pretending to deplore the violence that they espouse.
END_OF_DOCUMENT_TOKEN_TO_BE_REPLACED

The good news is that Ireland has voted to remove the crime of blasphemy from its constitution, with young people leading the way.

Until recently, Ireland was deeply conservative, dominated by the Catholic church, but the country has legalised gay marriage and abortion in popular votes, and is now led by an openly gay taoiseach.

Reflecting the speed of changes in Ireland, the strongest support for ending the ban came from younger voters, exit polls suggested. Four in five voters under 35 backed the change, according to the Irish Times, while over-65s only approved it by a narrow margin, with 52% in favour and 48% against.

The government had already laid out legislation to remove the offence of blasphemy from the constitution and all relevant laws, should the referendum be passed.

It has been over 150 years since anyone was prosecuted for blasphemy in Ireland, but the country had passed a blasphemy law in 2009.

END_OF_DOCUMENT_TOKEN_TO_BE_REPLACED

As Josh Marshall points out, the Pittsburgh synagogue shooter Robert Bowers explicitly attacked the Hebrew Immigrant Aid Society (HIAS) that helps refuges with resettlement in the US, saying on the white nationalist social media site Gab just before the slaughter, “HIAS likes to bring invaders in that kill our people. I can’t sit by and watch my people get slaughtered. Screw your optics, I’m going in.”
END_OF_DOCUMENT_TOKEN_TO_BE_REPLACED

Here is an interesting news item. It seems like Trump-whisperer Steve Bannon is not the sure-fire crowd puller that the Republican party thinks he is, as evidenced by what happened when they made him the featured keynote speaker at a fundraiser.
END_OF_DOCUMENT_TOKEN_TO_BE_REPLACED

Some readers may recall me discussing a book manuscript that I have been working on, the title of which is THE GREAT PARADOX OF SCIENCE: Why its theories work so well without being true and may have been wondering what was happening concerning it. I am pleased to say that Oxford University Press will be publishing it and should appear at the usual retail outlets sometime in mid-2019, though early orders can be made some months before. I will keep readers posted because, as described below, the book deals with topics that should be of interest to many of you.
END_OF_DOCUMENT_TOKEN_TO_BE_REPLACED

After ramping up hateful rhetoric against any and all perceived opponents, and coddling and downplaying the words and actions of white supremacists and neo-Nazis, Donald Trump and the Republicans will now try to distance themselves from the climate of anger and violence they have spawned, the most recent manifestation of it being the vicious murder of 11 people and the injuring of six others at a Jewish synagogue in Pittsburgh by a neo-Nazi who, during the rampage, was saying pretty much the same words as the neo-Nazis who marched in Charlottesville.
END_OF_DOCUMENT_TOKEN_TO_BE_REPLACED

The Daily Show alumnus Hasan Minhaj has been given a new weekly show titled Patriot Act with Hasan Minhaj on Netflix that premiers today Sunday, October 28 at 7:00pm. He has been signed up for 32 weeks in advance, so he has been given a longer period to establish a rhythm and voice, unlike Michele Wolf whose show was canceled after just 10 episodes.

Minhaj was interviewed about the show and he said that he did not want to to become the ‘Indian John Oliver’ and it will be interesting to see how he distinguishes his show from the other political comedy shows.