The late great comedian George Carlin had a funny routine about the seven words that you could not tell on television. (Language advisory, obviously)

But the Trump administration has issued a list of seven words and phrases that the Centers for Disease Control is prohibited from using. The list gives a good indication, if we needed any, of the extreme ideological bent of this administration.

Policy analysts at the Centers for Disease Control and Prevention in Atlanta were told of the list of forbidden words at a meeting Thursday with senior CDC officials who oversee the budget, according to an analyst who took part in the 90-minute briefing. The forbidden words are “vulnerable,” “entitlement,” “diversity,” “transgender,” “fetus,” “evidence-based” and “science-based.”

In some instances, the analysts were given alternative phrases. Instead of “science-based” or “evidence-based,” the suggested phrase is “CDC bases its recommendations on science in consideration with community standards and wishes,” the person said. In other cases, no replacement words were immediately offered.
…

At the CDC, the meeting about the banned words was led by Alison Kelly, a senior leader in the agency’s Office of Financial Services, according to the CDC analyst, who spoke on the condition of anonymity because the person was not authorized to speak publicly. Kelly did not say why the words are being banned, according to the analyst, and told the group that she was merely relaying the information.
…

The longtime CDC analyst, whose job includes writing descriptions of the CDC’s work for the administration’s annual spending blueprint, could not recall a previous time when words were banned from budget documents because they were considered controversial.

The reaction of people in the meeting was “incredulous,” the analyst said. “It was very much, ‘Are you serious? Are you kidding?’ ”

Mind you, this is from the administration of Donald Trump who got a lot of mileage railing at ‘political correctness’ and that people are now free to say “‘Merry Christmas’, as if they could not before.

Kevin Drum has some suggestions for words to replace the banned ones. I think they capture well what the Trumpists think the banned words represent. 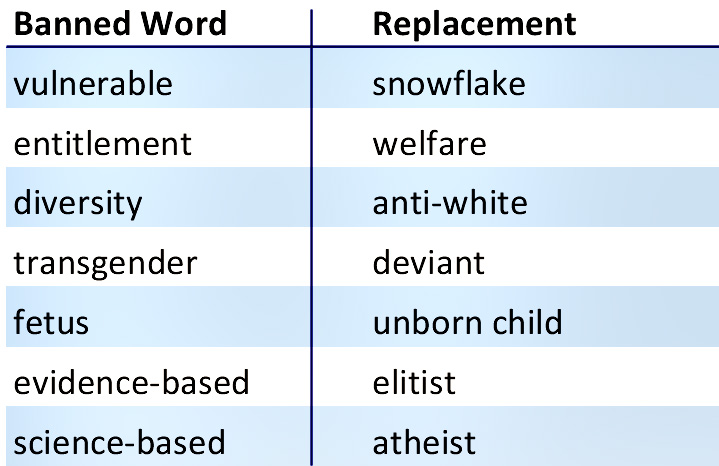