Even a cursory acquaintance of with plants will make one aware that they seek the light and will turn towards it. This phenomenon is called phototropism. But if that is the case, then why is it that plants and tall trees seem to grow vertically upwards and do not lean towards the equator, with the tilt being more pronounced the further away from the equator one goes? Even when they grow on sloping hillsides, trees grow vertically and not perpendicular to the ground.

The answer seems to be that there is another factor that determines direction and that is gravity and the phenomenon is known as gravitropism (or geotropism). Plant stems tend to grow in a direction opposite the direction of the local gravitational force while roots grow in the direction of that force. This has been tested by a study I read a long time ago that involved growing plants in centrifuges that are rotated in the horizontal plane. This rotation gives rise to a centripetal acceleration towards the center of rotation which, according the Principle of Equivalence, should have the same effect as a gravitational force in the opposite radial direction. It is found that the plant stems do indeed grow in the horizontal plane towards the center of rotation and the roots away from it.

But in the case of certain tall and slim trees known as Cook Pines (Araucaria columnaris), the pull of the sun can overpower the geotropic effect and then you do see them leaning towards the south (if they are in the northern hemisphere) and towards the north (if they are in the southern hemisphere), with the amount of tilt increasing the further one gets from the equator. The paper titled Worldwide hemisphere-dependent lean in Cook pines that showed this can be read here. It has a photograph of Cook trees on the campus of the University of California, Irvine that have a pronounced lean to the south as if they are being buffeted by gale force winds from the north.

A discussion of the paper can be read here and it includes a photograph of Cook pines in Sri Lanka. Even though that country is close to the equator, just 6o north of it, the tilt is still observable. 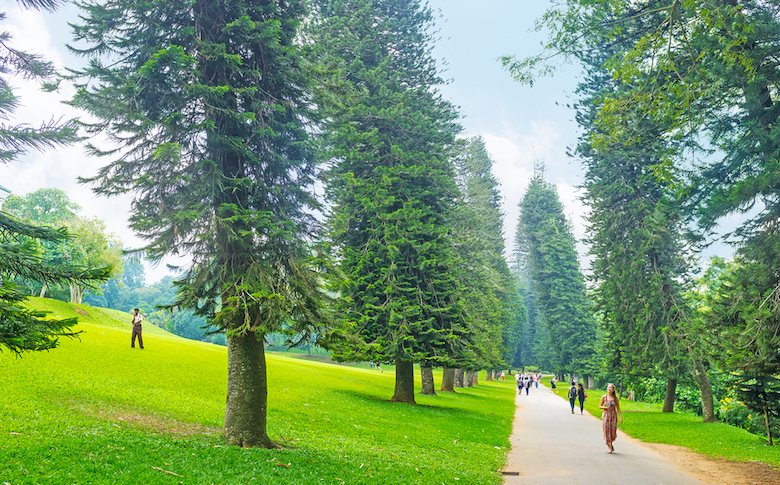 The authors of the paper say that the lean of the Cook pines is so noticeable that it is often used as the identifying marker for the species. They say that it is unclear why the phototropic effect dominates over the geotropic one for this particular tree.

A tree’s form is determined by the complex interactions of genetics and environmental stimuli. Under most conditions, trees grow vertically in response to the opposing influences of light and gravity. In challenging environments, where competition for light or mechanical stress is intense, trees may grow in a non-vertical fashion.
…

The mechanisms underlying directional lean of Araucaria columnaris may be related to an adaptive tropic response to the incidence angles of annual sunlight, gravity, magnetism, or any combination of these. It is interesting that the pronounced lean in A. columnarisis rare in other species, including other Araucaria native to New Caledonia. It is possible that the biophysical constraints of leaning for a tall tree ultimately prevail over any benefits of additional light interception gained by leaning Another possibility is that the lean is non-adaptive, or even harmful. Even though A. columnaris is one of the most widespread Araucaria species in New Caledonia, and the only one to express a lean, the species may nevertheless have small effective population sizes, and suffer fixation of deleterious alleles. [Citations omitted-MS]

Plant growth is endlessly fascinating to a non-botanist like me. One thing that astounds me is how fast they can grow. When I find a huge mushroom appear in the garden just overnight, it reminds me of how quickly plant mass can be created. I think that my amazement is because of the fact that plants look like inert objects and yet inside they are clearly working away like crazy doing all manner of plant growth stuff.