News media were agog with the news of how during his visit to Israel and the Occupied Territories, pope Francis stopped his motorcade and went up to the apartheid wall that Israel has constructed, touched it with his head and prayed. Kelly Lynn describes, along with many photographs, how Palestinian activists managed to evade Israeli security guards and spray paint messages on the wall and a massive gate that the government had just painted over earlier to hide previous messages.

A few minutes before the pope arrived, they quickly went into action and painted new messages that read, “Pope, we need some1 to speak about justice” and “Pope, Bethlehem look like Warsaw Ghetto.” It as clear that the pope was moved by what he saw,

And then, in a glass-covered pristine white pick-up truck, he came.

“I didn’t expect the Pope to go down and start to read the sentences and meet the children and people there. He shocked us,” said Abu Srour.

He stepped onto the red-carpeted stairs of his custom ride and down onto the severed Jerusalem-Hebron Road, where he walked deliberately toward the gate, as if it was actually planned (it was not according to his security team). One must have a little more experience with His Holiness to know if his face is always so somber. But it was somber. He didn’t ignore the two young girls to his right but his solemn focus was on the gate, the Wall. Initially, he seemed to express awe as he reached out his hand to touch just under Abu Srour’s hurried handiwork, “Pope, Bethlehem look like Warsaw ghetto.”

He stayed for several minutes as guards kept the distance between him and the mostly cell phone photographers jockeying for a shot. An Israeli soldier could be seen observing the situation from the sniper tower above.

His head bowed, the Pontiff touched his forehead to the monolith before slowly retreating back to his car and continuing his route to the Nativity Church. It was an undeniable picture of solidarity for Palestinians who have suffered under the wall and its effects for a decade now.
…

He also visited refugee camps and met with some of the children in them.

That afternoon, he made his way to Dheisheh Refugee Camp for a ceremony and meeting with mostly children from the camp including participants from neighboring Azza and Aida camps. As his caravan entered the camp, local kids clamored against a metal barrier for a glimpse and held signs that read in English, “Every year, Israel arrests over 500 children.” After the ceremony, he was whisked away in a helicopter, rising slowly above families who had brought chairs and children to their roofs to wave.

Here are children from the Dheisheh Refugee Camp waiting to see the pope. 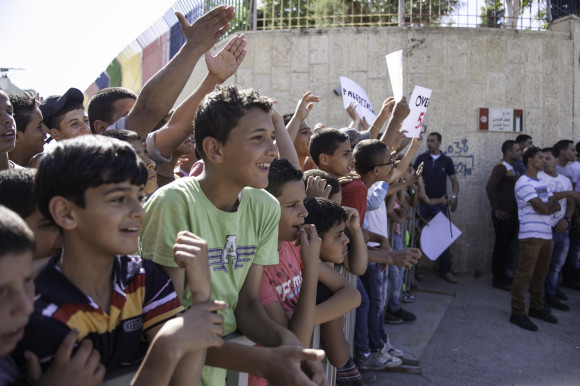