Many of us have been saying for years that Donald Trump is a dangerous fool, and that the Republican party has become the party of treason. Do you agree with us now?

So, with the revelation of MASSIVE & WIDESPREAD FRAUD & DECEPTION in working closely with Big Tech Companies, the DNC, & the Democrat Party, do you throw the Presidential Election Results of 2020 OUT and declare the RIGHTFUL WINNER, or do you have a NEW ELECTION?
A Massive Fraud of this type and magnitude allows for the termination of all rules, regulations, and articles, even those found in the Constitution. Our great ‘Founder’ did not want, and would not condone, False & Fraudulent Elections.

That’s an outright admission that he wants to overthrow the government and install a dictatorship ruled by his whims. So what are we doing about it? NOTHING. 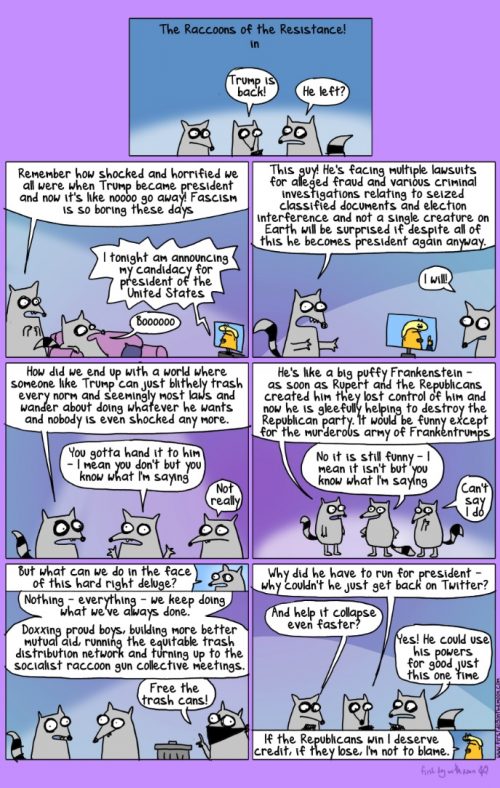 And still a significant proportion of the Republican party don’t comprehend the magnitude of his betrayal of the country.

One third regard Trump unfavorably…which means two thirds still think he’s peachy. He’s admitted he’s willing to stand in the middle of Fifth Avenue and shoot the Constitution, and all these people who in other circumstances fervently announce their support of the Founding Fathers, and are outraged that anyone would teach their kids any criticisms of 18th century America, are just fine with it. Do you want to be a banana republic? Because this is how you get a banana republic.

How can they let this admission of treachery slide? Because the Republican party is also the stupid party. Case in point: Herschel Walker.

You know what still stings? Fifteen years ago, I was at an organization meeting for the local Democrats, and they were looking for volunteers to run for office, and I volunteered to run for the school board. Everyone looked at me like I was a crazed madman, and quietly suggested I put my hand down and that we get someone who was electable. Ouch. It sill burns.

But somewhere, a group of Georgia Republicans met, looked over the available field of conservatives willing to run for high office, and they picked Herschel Walker, a man who every day demonstrates that he has a turnip in his skull instead of a brain. Someone with the mind of a slow child, who didn’t get past his fourth grade grammar lessons.

He doesn’t understand reason, either. His recent babbling gaffe about werewolves and vampires got the attention of Obama, and he’s not happy about it. 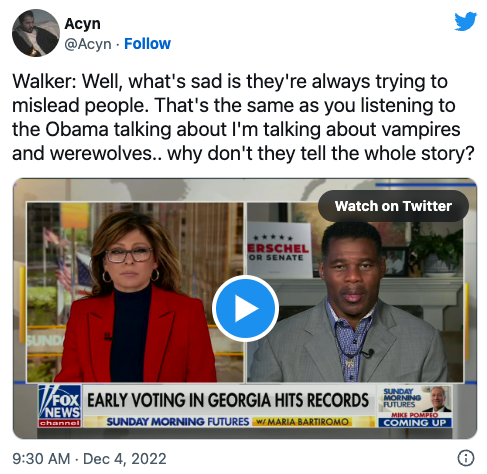 Walker: Well, what’s sad is they’re always trying to mislead people. That’s the same as you listening to the Obama talking about I’m talking about vampires and werewolves.. why don’t they tell the whole story?

The whole story is that he used a fictional horror story as evidence of the importance of faith. Obama neglected to tell everyone that Walker was a godly man who interpreted cheesy movies as evidence for Jesus.

Walker discussed his internal would-you-rather werewolf vs. vampire debate in the context of recalling a movie he said he had watched about a vampire. He concluded his story by talking about the importance of faith because in the movie, he said, a person who did not believe in God tried to kill a vampire with a cross and failed because they didn’t have faith. On Fox, Walker said, The whole story is the story involved people having faith, having faith and continuing to go out and do your job, having faith to get things done. So they don’t tell you the whole story.

Shut up, Herschel. Shut up. In that Democratic meeting, I was willing to put my hand down and let someone else electable run, and you can’t even stop running off at the mouth about a story that was an embarrassment for you.

That’s the Republicans for you, the party of stupid criminals.

If it weren’t so dizzying, it might be entertaining » « The Christmas movie I deserved