It’s December First, time to resume the battle. Except, uh-oh, there are some uncomfortable associations with my side in the battle. You know, we atheists aren’t trying to get rid of Christmas — we like parties — we’re just trying to escape the religious implications of the season.

Who else tried to remove the Christian element from the holiday? Hitler, that’s who. 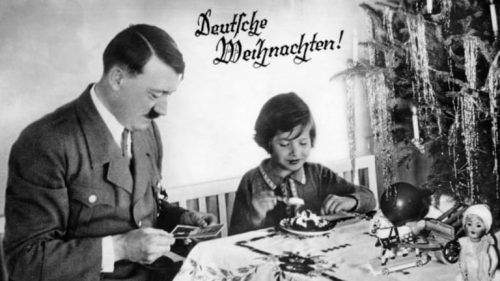 During the 1930s and 1940s, the Nazis did their best to transform Germany’s beloved Christmas traditions into Nazi ones. Though Hitler’s attempts to create a national church failed, his party’s attempt to redefine religious celebrations was more successful. To do this, they used ideology and propaganda to put the holiday in line with the national socialists’ anti-Semitic values.

The Nazis’ problem with Christmas was baked into Christmas itself. After all, Jesus was a Jew—and both anti-Semitism and the goal of eradicating Jews and Jewishness were at the very core of Nazi ideology.

OK, it’s true we’d like to subvert the religious associations, but it’s not for the purpose of anti-semitism (a significant difference, I think), it’s to make the holiday more inclusive. You want to celebrate a traditional, conservative Christian Christmas? Fine, go ahead, I’m happy for you. You want to strip naked and dance in the moonlight on the solstice? Also good, you do you. But nobody should try to swap the participants in those two rituals. And it’s possible to go too far in distancing yourself from basic civil behavior during the season. Like Nazis.

Among the most important was the celebration of the winter solstice. The Nazis attempted to move the date of Christmas to the solstice instead and mounted large performances and community bonfires that supposedly drew on pre-Christian rituals. They also tried to redefine St. Nicholas as Wotan, the ancient Germanic deity.

As the years went on, Nazi attempts to take over Christmas intensified. The Nazis rewrote the lyrics of “Silent Night” to remove all attempts to religion or Christ. They distributed Advent calendars for kids filled with propaganda and militaristic imagery. They even tried to rewrite Handel’s Messiah. Mothers were encouraged to bake swastika-shaped cookies. Even the familiar star that topped millions of Christmas trees was replaced by a sunburst that looked less like the Star of David.

Rewriting “Silent Night”? I also approve. Nice slow melody, but man, those lyrics are thoroughly soaked in god-shit. You can sing it however you want, but I personally can’t stand the words to the song.

Also, it’s more Nazi-like to tell me I can’t say “Happy Holidays” and force me to abide by every sacred nuance of your peculiar religious tradition.

Do you need a laugh this morning? » « Somebody has a filthy mind