Mary told me I should mention this app, Merlin Bird ID, in case you don’t already have it. You fire it up, click on a button, and it just listens and tells you what birds it hears. I got it a while back because the crazy early morning bird cacophony was bugging me — at least I ought to know who’s shrieking at me early in the morning. I can sit in my office and have it inform me what all the noise is about. This morning it was black-capped chickadees chattering away, blue jays and redwinged blackbirds making a ruckus, and an American robin fussing about. It’s not as bad as it was earlier this summer, because we also have a Cooper’s hawk hanging about in the neighborhood. When it squeaks, it gets quiet, briefly. 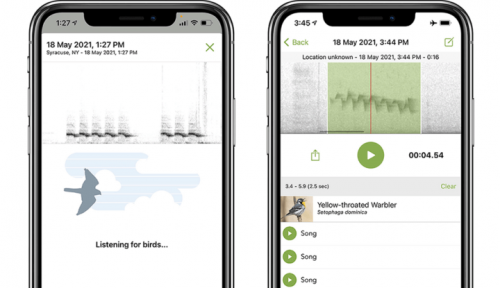 Hey, I’ve noticed fewer squirrels making pests of themselves lately. I wonder if I should play recordings of a Cooper’s hawk when they start climbing the bird feeder and scrabbling at my window. (Before you say squirrels are pretty clever and will just learn to ignore the noise, that’s part of the plan: they’ll become more vulnerable to hawks then.)

If you’re more of a visual person, I’ll also recommend Seek from iNaturalist. Put that on your phone, aim it at any organism, and it’ll use the iNaturalist database to let you know the scientific name of what you’re seeing. It’s very handy. It even works on spiders, unlike the Bird ID program.

It takes courage to visit CPAC » « I guess I need to say it again: squid didn’t come from space