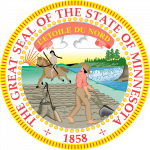 Maybe later we can vote on changing that hideous seal?

I only realized this weekend that we have an election this Tuesday. I’m so used to thinking of elections happening in November that I almost overlooked it.

At least deciding who to vote for is easy: if they are a Republican, there’s no way any sane individual could support them. Democrats, as usual, are an undisciplined mess, and somehow, multiple candidates are running as Democrats. Who to vote for? I propose a simple rule: vote for the incumbent Democrats. Normally, that would be a way to perpetuate lackluster leadership, but right now, with Evil in the opposing slot, we need as simple and clear a rubric as possible. So, yeah, I’m going to vote for boring, uninspiring Walz for governor.

Other obvious answers you already know for winnowing down the field: don’t vote for amusing weirdos, so no, we don’t want Captain Jack Sparrow for lieutenant governor. Don’t be seduced by tangential issues: I’m entirely in favor of legalizing marijuana, but do we really need two new parties, the Legalize Marijuana Now party and the Grassroots Legalize Cannabis Party, to advocate for a single issue? No, we do not, they’re just splitting the liberal vote.

This year, we should be all about holding the line presenting a solid front, and less about revolutionary actions. We can get radical when fewer people’s lives are on the line, and believe me, when Republicans get elected, people will die.

Conservative philosophy is both stupid and pretentious » « Spider Studio Mk. I