I’ve been struggling to document pigmentation changes in my developing Steatoda triangulosa because they’re annoyingly alive. They’ve got preferences — they like to hang upside down, they will occasionally move, they are not being obliging as far as photography goes. They’re as lovely as a supermodel, but they’re also somewhat diva-ish and uncooperative. When I tell them to pose, or spread those legs, or look at the camera, they just ignore me. It also doesn’t help that I’ve got them living in these rigid containers, and if I shoo them out into a more photogenic location they get agitated and skitter about.

So I thought of a better way to manipulate them. Behold, Spider Studio Mk. I! 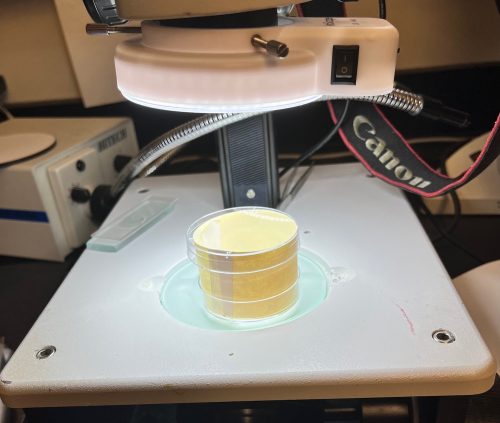 As usual, simple is better. All this is is a strip of paper curled into a cylinder, held together with two pieces of tape, sandwiched between the top and bottom of a petri dish. It’s ridiculously simple. The first test was to put a spider in there and see what they thought of it. They liked it! They built a cobweb in there and were hanging there, as always, when I came in this morning. Big bonus: they seem to prefer attaching silk to the paper walls than to the plastic dishes. I simply took away the petri dishes, leaving me with a nice calm undisturbed spider hanging in a paper hoop. I could orient the ring any way I wanted without stressing the spider at all!

I took a few pictures of my test subjects (I’ll put them on my Patreon for anyone who really wants to see them). It was great. I could take a picture of the dorsal side, and then flip the ring and take an equivalent picture of the ventral side.

I still have to make a few refinements. The paper ring is a bit thicker than necessary, and it still gets in the way when oriented to certain angles, so I’ll make thinner ones. I’m also going to stick some paper handles to the outside so I can use these soldering helping hands I’ve got to hold them in place.

There’s nothing I can do to cope with these being living animals. They still like to shuffle around on their web, but minimizing manipulation reduces that.

Minnesotans! Vote! » « Metabolism First! And the origin of life