Well, this is one horrific story of child abuse.

The Adams family lived on a lonely dirt road about 8 miles from the center of Bisbee, an old copper-mining town in southeastern Arizona known today for its antique shops and laid-back attitude. Far from prying eyes, the Adams home — a three-bedroom, open concept affair surrounded by desert — was often littered with piles of clothing and containers of lubricant Adams used to sexually abuse his children, according to legal documents reviewed by the AP.

He had a short fuse and would frequently throw things, yell at his wife and beat his kids. “He just had this explosive personality,” said Shaunice Warr, a Border Patrol agent and a Mormon who worked with Paul and described herself as Leizza’s best friend. “He had a horrible temper.”

Paul was more relaxed while coaxing his older daughter to hold a smartphone camera and record him while he sexually abused her. He also seemed to revel in the abuse in online chat rooms, where he once bragged that he had “the perfect lifestyle” because he could have sex with his daughters whenever he pleased, while his wife knew and “doesn’t care.”

How can someone get away with that? The one cunning trick: he’s a Mormon. He confessed all to a Mormon bishop, who tossed the information into a confidential Mormon network, where everyone was more concerned with protecting the ‘good name’ of the Church of Latter Day Saints (and their own asses) and let it go on and on for seven years. The little girl is finally out of that house, and three of the kids are suing their father and the Mormon church. The church lawyers are something else.

MJ and her adoptive mother asked the AP to use only her initials in part because videos of her abuse posted by her father are still circulating on the internet. The AP does not publish the names of sexual abuse survivors without their consent.

William Maledon, an Arizona attorney representing the bishops and the church in a lawsuit filed by three of the Adams’ six children, told the AP last month that the bishops were not required to report the abuse.

“These bishops did nothing wrong. They didn’t violate the law, and therefore they can’t be held liable,” he said. Maledon referred to the suit as “a money grab.”

They did nothing wrong? Sheltering a pedophile and rapist isn’t wrong? Allowing children to suffer for years isn’t wrong? I guess the Mormon church doesn’t care much for that morality stuff.

At least MJ has emerged from his horrible experience with the right attitude.

“‘I just think that the Mormon church really sucks. Seriously sucks,” said MJ, who is now 16, during an interview with the AP. “They are just the worst type of people, from what I’ve experienced and what other people have also experienced.” 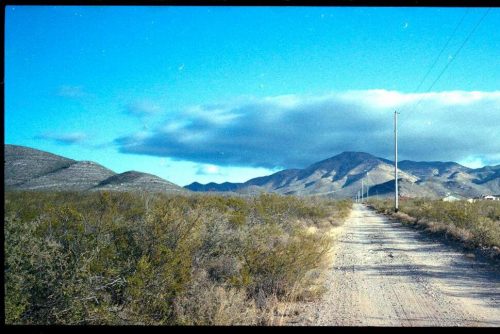 A dirt road leads to what was once the home of Paul Adams and his family on the outskirts of Bisbee, Ariz., Oct. 26, 2021. Adams, a Mormon and U.S. Border Patrol agent living with his wife and six children, admitted he had posted videos on the dark web of him molesting two of his children, a 9-year-old girl and a younger daughter he began raping when she was only 6 months old. Adams killed himself after his arrest. The revelation that Mormon officials directed an effort to conceal years of abuse in the Adams household sparked a criminal investigation of the church by Cochise County attorney and a civil lawsuit by three of the Adams’ children. (AP Photo/Dario Lopez-Mills)