The Washington Post ran an Katie Ledecky, a swimming champion. She looks impressive.

In truth, there’s no debate. The greatest D.C.-area athlete in history — by far — is Bethesda’s Katie Ledecky.

She is the greatest women’s swimmer in history — also not a subject for debate. She added to her legacy this past week at the world championships in Budapest, winning gold medals in the 400-, 800- and 1,500-meter freestyle. She added a fourth gold in the 4×200 freestyle relay, charging from behind on the third leg to give the United States the lead for good. The 200 is Ledecky’s “weakest” race, yet she produced the fastest split among the 32 swimmers competing in the relay final.

The article is all about her and her abilities and how successful she has been. Twitter addresses it a little differently.

On the one hand, there are the people who look at her and announce that she is trans. She isn’t.

Then there are the bigots who know she’s AFAB, but are so wedded to the idea of trans women’s inherent physical superiority that they’re sure she couldn’t compete against a “biological male”.

No, Lia Thomas (a trans woman) does not perform anywhere near the exceptionally high level of Katie Ledecky.

There is a lot of back and forth along these lines. There are apparently many ignorant “gender criticals” who are happy to embarrass themselves. 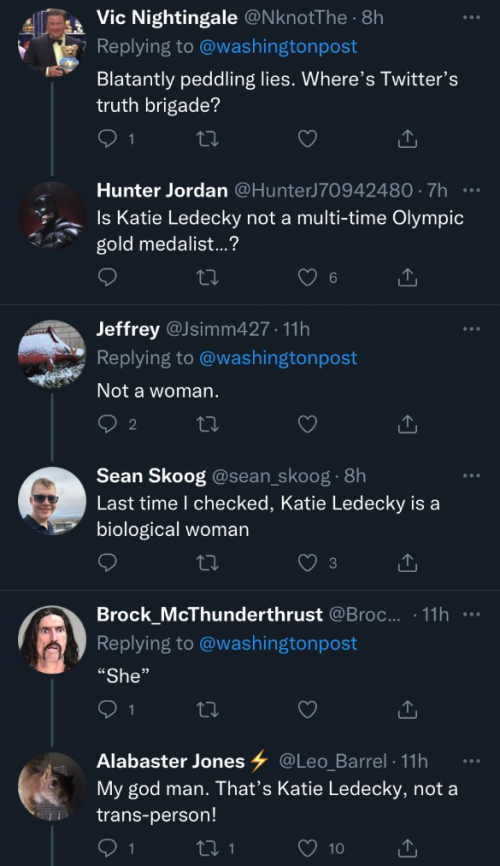 Katelyn Burns is collecting primo examples of this behavior.

These people are shameless idiots. The ones I feel sympathy for are Katie Ledecky, whose victories are being belittled by dumb ideologues, and Lia Thomas, whose abilities are respectable, but she has the pressure of being inappropriately compared to a world-class gold medalist.

Leave them alone, you pathetic wankers.