Checked on my collection of S. triangulosa egg sacs this morning. The one I’ve been waiting on for 27 days hasn’t yet opened up, but it looks distinctly different — it’s a black mass with little hairy black legs poking up, surrounded by cottony fluff. The spiderlings are making me wait longer. I was tempted to pull out my forceps and extract them by force, but I’m waiting to see what the normal developmental time at 28°C might be, so no shortcuts allowed. Any day now, as I’ve been saying for a week.

Then I checked on their momma. I’ve moved her into a separate, larger container now, and the other day I fed her a big juicy mealworm…which immediately thrashed it’s way out of the web and fell to the container floor. The web was pretty much shredded at that time, and I couldn’t stick the worm into it, so I left it there and figured I’d move it today, when the web was repaired. Usually, Parasteatoda ignores food that doesn’t land in a web, and I figured she’d be the same. They’re rather passive predators.

I was wrong! S. tri is willing to get down and dirty, had dived in snared the mealworm, and then hoisted it about 10cm up. It was dead, dangling, with a black ring in the segment that the spider had bitten and sucked out its juices. 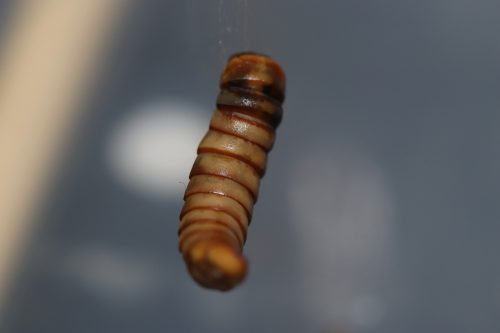 Good work, mom. Then I sought out the spider, who was now nearly spherical again. I’ll spare the arachnophobes that image.

Then, to my surprise, she had spent last night laying another egg sac! 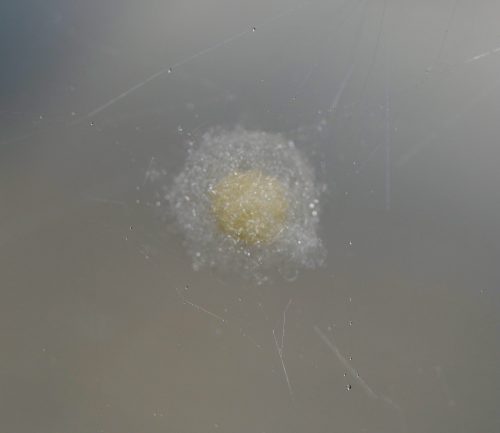 That’s 5 in 4 weeks. I’d wondered how they kept their population up compared to P. tep, since their egg sacs hold a fifth the number of spiderlings. There’s the answer: they make it up in volume.