Oh, look. Abortion is still safe in a few states, including Minnesota. 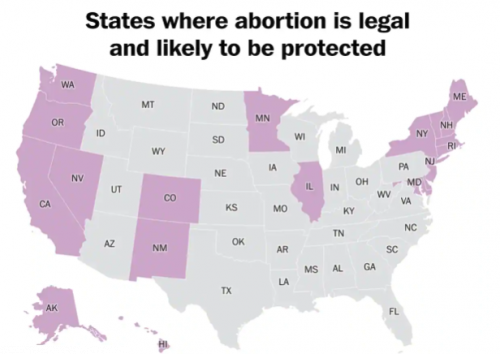 I don’t know what’s wrong with those gomers in North Dakota, South Dakota, Iowa, and Wisconsin, but at least the Minnesota state government has its head mostly screwed on right.

Gov. Tim Walz, a DFLer, in a Facebook post, said: “The Supreme Court’s decision on Roe v Wade is a blatant violation of a woman’s right to choose. But let me say it again: There will never be a ban on abortion in Minnesota on my watch.”

I’d volunteer my house as a waystation on the 21st Underground Railroad that is going to emerge, funneling pregnant people to our still functioning women’s (and trans men’s) health clinics around Minneapolis and Moorhead, but Morris isn’t on the way to anything. We’re way off any major freeway route. Also, to be honest, I live in Minnesota gomer country. We’ve got “crisis pregnancy centers” out here, which are unconscionable shams to draw in people with unwanted pregnancies, where they get handed religious literature and told horror stories about abortion, but that provide no useful medical assistance at all. The countryside of rural Minnesota is littered with godawful religious billboards (Pro-Life Across America, the organization that puts up those awful “my heart was beating at 4 weeks” with a picture of a 48-week infant, is based in Minneapolis).

And yes, just like in the surrounding states, every Republican in Minnesota is a deadly stupid asshole. If you’re trying to get to Minnesota for help, get on I-35 or I-94 and stay there until you get past the suburban ring of Republican sewage that surrounds the city of Minneapolis itself, and don’t get out of the car until you arrive. Once you reach the I-494/I-694 beltway, you might be safe.

Or fly in. The airport is reasonably close.

This is part of the cruelty of the Supreme Court abortion decision. It’s not easy, or it’s expensive, to get good, responsible health care for pregnant people. No matter where you live, if you can afford it, you can donate to help desperate people stuck in the bowels of the beast (that is, most of the country), get to where doctors are allowed to do their work. For instance, Robin Marty, a former Minnesota activist for abortion rights moved a while back to become an Alabama activist for abortion rights — I guess she went where she was needed most — endorses the West Alabama Women’s Center, and I trust her on these matters.

I get email: for the programmers out there! » « I think I’ll be a daddy this weekend