Yesterday, Jackson Wheat sent me a link to this ‘discussion’ between Jordan Peterson and Richard Dawkins. I don’t recommend listening to it. I only made it through the first 5 minutes before the gag reflex kicked in. Peterson does most of the talking; the opening is Peterson simpering about how Bill C16 was compelled speech, and Dawkins agreeing and praising his courage.

You’ll understand why I then glanced at the timer and saw it was an hour and a half long and closed it with a few disgusted curses.

Then an excerpt from somewhere later in the video was posted on Twitter. It’s mostly Peterson explaining why two intertwined snakes are representations of DNA, which he saw clearly while on psilocybin. It is totally bonkers. It’s stupid and insane and infantile.

Jordan Peterson has finally offered a defense of his position that ancient symbols depicting intertwined snakes are literally representations of DNA! pic.twitter.com/b4x3fLqrHp 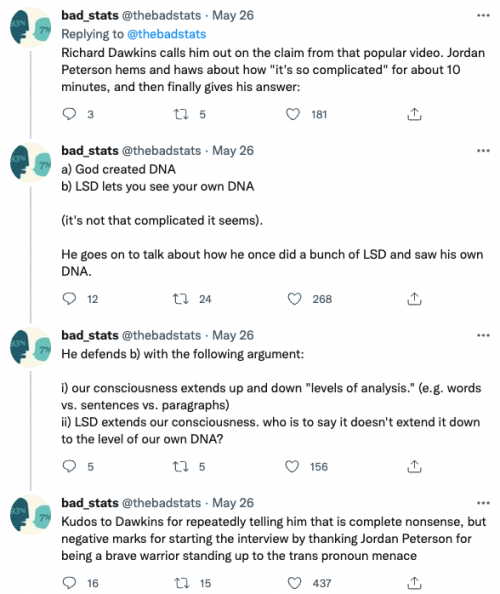 It reminded me a bit of that old video, much loved by creationists, in which creationists got into his office on the pretext of a filming an interview, and he just stopped, arrested by his British reserve, and was too polite to give them the ass-kicking they deserved. Jordan Peterson is a stark raving batshit dipsy-doodle con man.

It’s too bad Dawkins couldn’t see that the rest of Peterson’s schtick is just as groundless and loony.

Oh no! Marcus Ranum had a transient ischemic attack, and his brain went all wobbly! » « Another map!