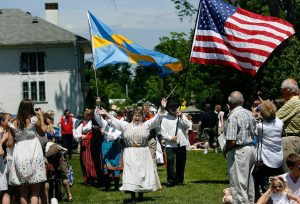 An article in the Star-Tribune caught my eye: Why did Scandinavian immigrants choose Minnesota? Even before I read it, I could guess why. I could also guess what other people would say.

Minnesota’s Scandinavian roots are a big part of the state’s national identity, from the Vikings football team to the Norwegian bachelor farmers of Lake Wobegon.

That Scandinavian stereotype harks back to an era when thousands of Swedish and Norwegian people traveled across the globe to establish thriving enclaves in the burgeoning frontier of Minnesota. But why Minnesota?

“When I ask anyone just in casual conversation, they all just say, ‘Well, because it’s cold here too!'” said reader Terri Stough, who moved to Minnesota in 2018. “And that kind of indicates to me that nobody knows the real reason.”

Right, it’s because Minnesota is like Norway and Sweden. Wrong. I’ve been to Norway, and there’s no way anyone could confuse Minnesota with Norway. One is flat, the other is mountainous; one is near the ocean, with deep fjords, the other is mostly landlocked, with one shore on a huge freshwater lake; one is prairie, the other is pine forest. They’re both in northern regions, with cold winters, but that’s about it.

The better answer is that it was all about the timing.

The abridged explanation is that America’s westward expansion — and the displacement of Native people that accompanied it — reached Minnesota around the same time that Swedes and Norwegians were fleeing bad conditions in their home countries. Aided by free land from the federal government, new immigrants formed settlements and encouraged friends and family back home to join them.

Another contributor is 19th century propaganda.

Prominent Swedish author Fredrika Bremer helped establish the area’s reputation as a hub for Scandinavians. Bremer journeyed to the Minnesota Territory in 1850 and wrote letters home that were later published into a Swedish book.

Minnesota is a fine place, good farmland, the weather isn’t as bad as its reputation would imply. The bandwagon effect also helped, with the early Scandinavian settlers writing home to tell everyone that they should join them. They were probably desperately lonely.

Among those letters was one sent by Norwegian immigrant Jens Grønbek, who wrote to his brother-in-law in Norway in 1867 trumpeting, among other things, the free land available through the Homestead Act.

“If you find farming in Norway unrewarding and your earnings at sea are poor, I advise you … to abandon everything, and — if you can raise $600 — to come to Minnesota,” Grønbek wrote, according to the book.

Grønbek told his friend that he should not worry about the voyage, adding this racist assessment: “Neither should you be alarmed about Indians or other trolls in America, for the former are now chased away,” Grønbek wrote.

Minnesota’s majority population is of German descent, though. So why doesn’t the state have a reputation as a Little Germany? Again, history.

But that German culture was suppressed for a number of reasons, Bredemus explained. Many people did not trust Germans as a result of World War I. Germans also organized unions, which were controversial. And drinking is a part of German culture, a practice that was demonized by puritanical groups during Prohibition.

During the war, statues were torn down, streets and buildings were renamed, and a new Minnesota Commission of Public Safety harassed the state’s German population while trying to root out unpatriotic sentiments, Bredemus said.

Meanwhile, next door in Wisconsin, Bratwurst und Bier are staples. It’s probably why the University of Wisconsin has a magnificent beer hall in the student union, while the University of Minnesota is dry. I really wouldn’t mind more beer and labor unions here.

But then, I’m descended from Scandinavians who first settled in Minnesota, and then flocked to Washington state around WWII, discovering then that that was the place more like Norway, only a bit warmer, so I knew all that. Paradise!