You have to choose A or B. I’m sorry, them’s the rules, no waffling allowed, because we believe in a strict binary decision here. 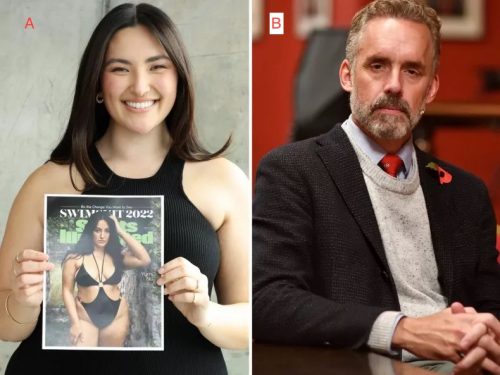 Jordan Peterson took this simple test, and failed, perhaps because he’s one of those animals that can’t handle the mirror test. When Sports Illustrated announced its annual swimsuit issue with a picture of (A), a woman named Yumi Nu, he declared Sorry. Not beautiful. And now amount of authoritarian tolerance is going to change that. I guess he is the definitive judge of the swimsuit competition, and thinks beauty is a physical absolute instead of a personal opinion.

Many people on Twitter were jolted into tweeting by the jarringly stupid, nasty mind that would say such a thing, and jumped all over him. So he announced that he was quitting Twitter because everyone was a poopyhead to say such mean things about him.

there's something so distinctively peterson about needlessly calling some random actual woman ugly under the bullshit guise of intellectual concern for the west and authoritarianism, and then whining about how people online are being mean to him pic.twitter.com/bSJkUe6cZ1

Wow. I feel like saying “get a thicker skin”, the go-to response people make when they point out the cruelty of the internet, that he should just ignore that which he dislikes, the way I ignore the Sports Illustrated swimsuit issue. Unfortunately, he made a very big deal of his departure.

The staunch proponent of free speech recently bemoaned “self-censorship as a multiplier of cancel culture” and in December called a critic with less than 70 followers a “fool and a coward.” Eventually, however, Peterson faltered under the intensity of the backlash.

He lamented the “endless flood of vicious insults” and opined that Twitter’s structure makes it “intrinsically and dangerously insane.” He also said that he’d recently taken a Twitter break for a few weeks and found it drastically improved his life. (His staff appears to have tweeted from his account in Peterson’s stead.)

So he’s decided to take leave of the platform once again.

“I told my staff to change my password, to keep me from temptation, and am departing,” he tweeted.

He then proceeded to tweet incessantly after making that announcement — I guess he was making a Minnesota good-bye. He may have sort of finally kinda left, though, with his latest and maybe last tweet, smugly announcing that he had 5 million followers on YouTube. It’s a version of I didn’t want to play stickball with you meanies anyway, ’cause I’ve got a Nintendo at home. Nyaa nyaa nyaa.

He’s one of those people who use their follower count as a measure of their worth.

I don’t follow him on Twitter or on YouTube though, so he can just petulantly march away and I won’t care, except to point and laugh at the whiner.

P.S. I won’t leave you hanging. The answer to my little quiz is B, B is not beautiful, using the principles of authoritarian tolerance, whatever that is.