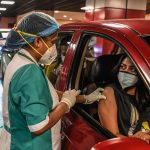 The latest from Science informs us of more COVID variants taking over, and they’re good at avoiding our immune systems.

Once again, South Africa is at the forefront of the changing COVID-19 pandemic. Epidemiologists and virologists are watching closely as cases there rise sharply again, just 5 months after the Omicron variant caused a dramatic surge. This time, the drivers are two new subvariants of Omicron named BA.4 and BA.5, which the Network for Genomic Surveillance in South Africa first detected in January.

The new strains didn’t have much of an impact initially, but over the past few weeks case numbers in South Africa jumped from roughly 1000 per day on 17 April to nearly 10,000 on 7 May. A third subvariant called BA.2.12.1 is spreading in the United States, driving increases along the East Coast.

It’s still unclear whether the new subvariants will cause another global COVID-19 wave. But like the earlier versions of Omicron, they have a remarkable ability to evade immunity from vaccines, previous infection, or both—a disturbing portent for the future of the pandemic and a potentially serious complication for vaccine developers.

In most cases, vaccination or earlier infection still seem to provide protection from severe disease. “There’s no reason to freak out,” says John Moore, an immunologist at Weill Cornell Medicine. The new strains are “an additional hassle,” he says, but “there’s no indication that they’re more dangerous or more pathogenic.”

I guess no one in my university’s administration ever reads Science, though.

Do you hate dinosaurs? » « The University of Minnesota president sends me warm wishes!