Our own American version of upper class twits

After making such a big deal about Ketanji Brown Jackson’s deferral after being asked, “What is a woman?”, you’d think they’d be prepared with a good answer to the question themselves. They aren’t.

“I’m going to tell you right now what is a woman,” Rep. Marjorie Taylor Greene (R-Ga.) informed the audience at a GOP event after namechecking Jackson. “This is an easy answer. We’re a creation of God. We came from Adam’s rib. God created us with his hands. We may be the weaker sex — we are the weaker sex — but we are our partner — we are our husband’s wife.”

That is not a workable definition. It’s actually kind of amazing that anyone in the 21st century would still believe that that old fable is literally true.

Sen. Josh Hawley (R-Mo.) was asked by a HuffPost reporter to define woman, and replied, “Someone who can give birth to a child, a mother, is a woman. Someone who has a uterus is a woman. It doesn’t seem that complicated to me.” When the reporter asked him whether a woman whose uterus was removed via hysterectomy was still a woman, he appeared uncertain: “Yeah. Well, I don’t know, would they?”

Poor slow Josh. He said it didn’t seem complicated, was immediately confronted with a complication. And didn’t know how to answer it. I wonder if there are any women in his district who will notice he just turned them all into “men”?

Sen. Marsha Blackburn (R-Tenn.) dodged the question three times in a row, citing her policy of not talking to reporters in Senate hallways ― even though it was Blackburn who made this an issue with Jackson in the first place.

I think there must have been some panicky emails swapped around after that so they would get their story straight, because Blackburn hurried back with an answer.

In a follow-up email to HuffPost, a spokesperson for Blackburn said her definition of a woman is “Two X chromosomes.”

Except not all women have two X chromosomes, and relatively few people have actually had their chromosomes directly examined. It’s not a good criterion, you know? You can’t claim that it’s always been obvious what men and women are, and then base that distinction on a cellular property that was completely unknown until about 120 years ago, and is completely invisible now without a microscopic examination. What were the Victorians doing, just stumbling around guessing who men and women were, bumbling about and accidentally impregnating or getting impregnated?

In a written statement, Sen. Chuck Grassley (R-Iowa) offered the same definition as Blackburn: “A woman is born with two X-chromosomes.”

Of course, Ted Cruz had to bungle it.

Cruz, when asked, immediately answered that a woman is “an adult female human.”

He denied that he had recently looked it up in a dictionary.

It’s Homo sapiens, you doltish imitation of a human made from a sack full of cockroaches. I’m not surprised that you would get that wrong.

Sen. Mike Lee (R-Utah) shouted his definition of a woman before slipping into a Senate elevator: “An adult female of the human species.”

Some people didn’t get the memo.

“I have more of a traditional view of what a woman is,” said Sen. Thom Tillis (R-N.C.).

It’s always nice to give the Ralph Wiggums a chance to speak up.

The prize for the most confused Republican answer has to go to Lindsey Graham, though.

Sen. Lindsey Graham (R-S.C.) said a woman is simply someone who is “biologically a woman,” adding that he thinks most Americans can figure out who’s a woman and who’s a man.

“The birds and the bees stuff ― it’s been a while, but I think I remember the general gist of the differences,” Graham said. “To have a hard time answering that question is kind of odd to me.”

A woman is someone who is biologically a woman. Got it. That’s helpful. Well, except that word “biologically”, which he just threw in to sound sciencey, inadvertently revealing that he’s got no scientific understanding at all, just like Cruz.

It’s also revealing that he has forgotten the details of that “birds and the bees stuff” and just remembers “the general gist of the differences”. Is it any wonder he doesn’t have any children? 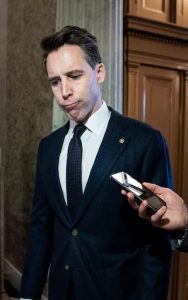 “Yeah. Well, I don’t know, would they?” Sen. Josh Hawley (R-Mo.) said when a reporter asked him if a woman whose uterus was removed via hysterectomy was still a woman.

Whatever happened to ID? » « My terrible awful horrible no good day