Y’all know Louis CK was awarded a Grammy the other night, right? Boy, he sure was canceled. He won’t be whipping out his tallywacker in front of unsuspecting women from now on, will he? They might punish him with a Netflix special or something horrible like that. 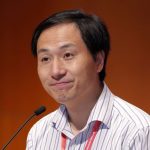 But here’s something even worse: He Jiankui has been set free. He Jiankui is the guy I called a self-aggrandizing mad scientist for his reckless, selfish experiment in which he modified human embryos with CRISPR/Cas9 and brought them to term. He claimed he was trying to prevent HIV/AIDS by deleting an immune system protein that the virus uses to bind to cells, but we know nothing about potential side effects or new susceptibilities it might confer, nor do we know how safe the procedure is, or even how effective this deletion would be. He charged ahead and ignored all ethical guidelines to make genetically modified babies, and then announced it as a big surprise at a conference. I bet he was surprised when the Chinese police arrested him and put him in prison for a few years.

The daring Chinese biophysicist who created the world’s first gene-edited children has been set free after three years in a Chinese prison.

Wait, wait, wait. “Daring”? You went with “daring”? What’s wrong with the editors at the MIT Technology Review? I would have suggested “unethical” or “criminal” or “incompetent”, and “biophysicist” sounds too complementary: “hack” would have been more accurate.

Then it goes on with this tripe:

It’s unclear whether He has plans to return to scientific research in China or another country. People who know him have described the biophysicist, who was trained at Rice University and Stanford, as idealistic, naïve, and ambitious.

Why are they flattering this guy? Why are there any doubts about his return to scientific research? There ought to be no question that He Jiankui should never be permitted to participate in any biomedical research ever again.

Unfortunately, he’s apparently part of a “network” of evil mad scientists who haven’t been hampered by the arrest of just one capo and are set to get back to work.

The researcher spent around three years in China’s prison system, including a period spent in detention as he awaited trial. Since his release, he has been in contact with members of his scientific network in China and abroad.

While responsibility for the experiment fell on He and other Chinese team members, many other scientists knew of the project and encouraged it. These include Michael Deem, a former professor at Rice University who participated in the experiment, and John Zhang, head of a large IVF clinic in New York who had plans to commercialize the technology.

Deem left his post at Rice in 2020, but the university has never released any findings or explanation about its involvement in the creation of the babies. Deem’s LinkedIn profile now lists employment with an energy consulting company he started.

“It is extraordinary and unusual that [He Jiankui] and some of his colleagues were imprisoned for this experiment,” says Eben Kirksey, an associate professor at the Alfred Deakin Institute, in Australia, and the author of The Mutant Project, a book about He’s experiment that includes interviews with some of the participants. “At the same time many of [his] international collaborators—like Michael Deem and John Zhang—were never sanctioned or formally censured for involvement.”

“In many ways justice has not been served,” says Kirksey.

I’m getting a little tired of “justice has not been served” stories, but that seems to be all we get anymore. Hey, how’s Donald Trump’s presidential campaign going?

I didn’t even know they were missing! » « What is a woman?