A Fox News host went on a QAnon show, and the absurdity just blew up from there. She started talking about Darwin.

What is the only thing on Earth that is actually renewable? It’s life. And they can, you know, go back to the big-bang theory and Darwin. I mean, when I found out, does anyone know when, who employed Darwin? Where Darwinism comes from? Well, I mean, you know, look it up, the Rothschilds. It goes right back to 10 Downing Street and the same people who employed Darwin and that’s when Darwin, you know, wrote his theory of evolution and so on and so on. And I’m not saying that none of that is true. I’m just saying Darwin was hired by someone to come up with the theory. Right? Based on evidence. OK, fine.

Um, no one employed Darwin. He was independently wealthy, getting his money from his inheritance (being related to the Wedgwood industrialists helped), rents and business investments, and book royalties. No one paid him to write The Origin, other than John Murray, that is, who was his publisher, and who also published Sir Walter Scott and Lord Byron. Now there’s a grand group of conspirators.

I know of no connection with the Rothschilds, other than that an anti-Semitic hate group (a term that applies to both Fox News and QAnon) wants desperately to connect the Jews to everything.

I did look it up, and didn’t find any links between Darwin and the Rothschild bankers. Well, except for maybe this weird incoherent rant about Rothschild-Khazarian Mafia.

Irony Alert! Darwin’s famous “scientific” voyage to the Galapagos Islands as the resident naturalist aboard the H.M.S. Beagle in 1831 was ostensibly made to catalogue different species of plants and animals, but in actuality was a prelude to pervert the history and Biblical origins of Mankind with the publication of his scientism (fake science) books, On the Origin of the Species (1859) and The Descent of Man (1871).

Of course Darwin (Marx, Nietzsche, Freud, Weber, and many, many other scientists and academics, philosophers and intellectuals since the last quarter of the 17th century) were virtually all financed with Rothschild (Fake Jewish Khazarian Mafia) money, (including all his books, essays, articles, and lecture tours) proposing his Theory of Evolution Atheism and Eugenics Racism which brought with it instant national and international fame and celebrity. Why were the Rothschilds interested in financing this obscure naturalist with no scientific expertise in either biology or zoology? Following the Kabbalah Law of Opposites and Babylonian Talmudism, the Rothschild Khazarian Mafia funded these anti-intellectual enterprises with the specific intent to deconstruct and ultimately destroy Christianity by pushing the academic atheism Big Lie that mankind is no different than the animals, and in fact descended from them.

If the crazed grammar doesn’t persuade you, they also published this image. 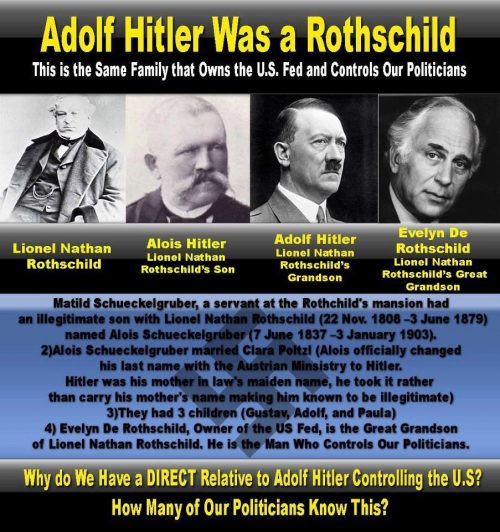 Yeah. Look it up.