I knew that Ketanji Brown Jackson was a good choice when I saw this illustration: 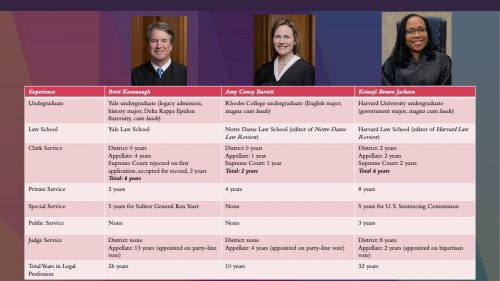 Not shown is possibly the most important qualification: she isn’t the choice of the Federalist Society.

But I also made a prediction to myself, that the hearings over her appointment were going to be a kangaroo court. Her qualifications don’t matter. She’s black. The Republicans were going to go for blood. Of course they did: Josh Hawley immediately accused her of being soft on pedophiles.

The pedophilia smear put the lie to Republicans’ assurances that they would conduct the hearings with dignity.

“We won’t try to turn this into a spectacle,” proposed Sen. Charles E. Grassley (Iowa), the committee’s ranking Republican.

Even Sen. Ted Cruz (Tex.), a regular ringmaster, said “this will not be a political circus.”

Then the clown car rolled in. Republicans used their opening statements to portray Jackson, the first Black woman nominated to the high court, as not just a pedophile enabler but also a terrorist sympathizer with a “hidden agenda” to indoctrinate Americans with the “racist vitriol” of critical race theory.

Then the assholes opened their sphincters.

Sen. John Cornyn (R-Tex.) scolded Jackson, a former public defender, for the way she represented “people who have committed terrorist acts against the United States,” saying her “zealous advocacy has gone beyond the pale.”

Sen. Tom Cotton (R-Ark.) seemed to be trying to associate the nominee with a host of evils in an inchoate tirade about “anarchists, rioters and left-wing street militias,” the “breakdown of society,” and “Soros prosecutors” who “destroy our criminal justice system from within.”

Sen. Marsha Blackburn (Tenn.), the final Republican to speak, accused Jackson of providing “free legal services to help terrorists get out of Gitmo and go back to the fight,” supporting “the radical left’s attempt to pack the Supreme Court” and harboring a “hidden agenda … to let violent criminals, cop killers and child predators back to the streets.”

A further prediction: in the final vote, the Republicans will be in lockstep to deny a highly qualified person a seat on the court.

We really need to destroy that political party. Those named Republican senators above, and many more, are a national disgrace, every one of them.

Peak Atlantic » « What next?