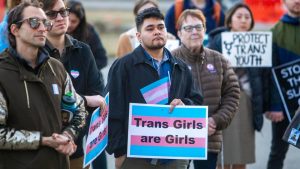 More than 100 people rallied on March 3, 2020, at the Idaho Capitol in support of transgender students and athletes during the 2020 legislative session. The Idaho House on Tuesday passed a bill that would criminalize providing gender-affirming medical care for trans minors.

The state is a playground for racists, white nationalists, and the religious right, which I guess should make it no surprise that their house of representatives passed a hateful, regressive bill to make health care for trans kids a felony.

The Idaho House on Tuesday overwhelmingly passed a bill that would bar gender-affirming medical care for transgender children. The bill, sponsored by Rep. Bruce Skaug, R-Nampa, would alter current state code that outlaws female genital mutilation. The new code would make it a felony to provide minors with puberty blockers, which stop or delay puberty, hormones or transition-related surgeries. The House passed the bill on a near-party-line vote. Rep. Fred Wood, R-Burley, a retired physician, opposed it. Other Republicans said the bill will preserve the ability to procreate and would protect children from regretting gender reassignment later in life.

I guess it’s something that one Republican opposed it, but also understandable: he’s a doctor, and this is a bill that targets doctors.

I am fascinated by the Republican rationale. It’s about “preserving the ability to procreate”, but puberty blockers don’t affect that, they just delay it, which ought to be considered a good thing, unless you really want 13 year olds to have children. Which is odd, since Idaho has long had a reputation for being the place to go for cheap, fast weddings. I can thank Idaho for my existence, since my parents eloped to Idaho to get married against my grandparents’ wishes when my mother was somewhere around 17 years old. (I think they’ve tightened up their laws a bit since the 1950s.)

It’s going to be a long struggle for Idaho lawmakers if they think their mission is to prevent teenagers from ever having regrets.

The sponsors of the bill are sick, sad puppies.

The ability to procreate is a fundamental right that must be protected, Skaug said. Don’t let their bodies be sterilized. Rep. Ben Adams, a Nampa Republican, quoted the Bible’s account of gender, after saying his transgender cousin had a mental health problem.

Again, puberty blockers don’t sterilize people. Some transgender men can still have children, and some transgender women can still impregnate other women. Procreation is a choice, not something that Republicans get to enforce, and no, the only mental health problem on display in the Idaho house is Republicanism. If they really cared about mental health, maybe they should ask qualified people how to treat it, rather than the Bible. Those qualified non-bigots seem to have a different take on it.

“It is so disappointing that some politicians in Boise have decided to follow Texas and Alabama down the path of imposing felony criminal penalties upon doctors who are simply doing their jobs. By making it impossible for doctors to provide care for their patients, transgender youth are denied the age-appropriate, best practice, medically-necessary, gender-affirming care that a new study just found reduces the risk of moderate or severe depression by 60% and suicidality by 73%.”

“Every kid in Idaho deserves the chance to grow up feeling safe and respected for who they are. Denying someone medically-necessary health care simply because you don’t approve of who they are is textbook discrimination. Decisions about what kind of care is appropriate for young people should be left up to the young person and their parents, in consultation with health care professionals, not by politicians looking to score political points at the expense of the well-being of transgender youth. It’s critical that the Senate listens to medical professionals, parents, and kids and refuse to entertain this flagrantly discriminatory legislation any further.”

This is all part of conservative agenda. Ever hear of ALEC? They write the laws.

The American Legislative Exchange Council (ALEC), a pay-to-play network of conservative state lawmakers and business lobbyists that writes model legislation, claims that it no longer works on social policy. But videos of ALEC-led events, obtained by the Center for Media and Democracy (CMD), tell a very different story.

At the 40th anniversary meeting of the Council for National Policy (CNP) in May, ALEC leaders boasted about their extensive efforts to advance state legislation to severely restrict access to abortion and limit the rights of trans students, as well as voter suppression bills.

I am not surprised. Idaho Republicans are stupid potato-brains who need a lot of help writing their evil laws.