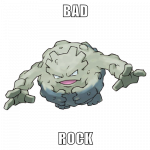 It’s unfortunately true. He is now straining to defend creationist caricatures of evolutionary biology. He has a new video exercise in sophistry in which he claims to have scientific support for the claim that “we evolved from a rock”. He excerpts Aron Ra pointing out that evolution does not argue that we are descended from a rock, and tries to refute him by finding a paper in Science that says we did. Only it doesn’t. He’s relying on colloquial use of terms to confuse the issue.

The paper says this:

Thank goodness for granite. If not for the formation and subsequent erosion of large quantities of metal-rich granite on a supercontinent that formed billions of years ago, the evolution of multicellular life—including us—could have been stifled or delayed, according to a new study.

For much of its history, life on Earth existed as only single-celled organisms. Certain proteins critical for multicellular life, and presumed to have been equally critical for its evolution from single-celled ancestors, require heavy-metal elements, especially copper, zinc, and molybdenum, says John Parnell, a geoscientist at the University of Aberdeen in the United Kingdom. Previous studies suggest that multicellular life evolved sometime between 1.6 billion and 1.2 billion years ago. Researchers thought that before that innovation, these vital metals were locked away from environments where life thrived—either sequestered in the oxygen-poor depths of the ocean or held in ancient ore deposits in Earth’s crust, waiting to be eroded.

This is not saying we evolved from granite, or descended from granite, or even came from granite. It’s saying that some metal elements that living organisms use as catalysts in chemical reactions eroded out of granite, and further, it’s a paper specifically about the origin of multicellular life, not all life.

As for Zillah, she also gave birth to Tubal-cain, the forger of all implements of bronze and iron; and the sister of Tubal-cain was Naamah.

Now the Lord spoke to Moses, saying, “See, I have called by name Bezalel, the son of Uri, the son of Hur, of the tribe of Judah. I have filled him with the Spirit of God in wisdom, in understanding, in knowledge, and in all kinds of craftsmanship, to make artistic designs for work in gold, in silver, and in bronze, and in the cutting of stones for settings, and in the carving of wood, that he may work in all kinds of craftsmanship.

If I were to now claim that the Bible says we “came from” bronze, iron, wood, gold, and silver, that would be as deliberate a misreading as Powell’s claim that evolution says we “came from” rocks. Life arose from energy-rich molecules in solution in the ocean. That early life used essential metallic elements in promoting chemical reactions does not imply we “came from” rocks, any more than when the Bible proudly declares in Joshua 10:28 that Joshua captured Makkedah that very day, and attacked both it and its king with swords, utterly destroying it along with every person in it, leaving no survivors, it is implying that the Israelites were made of swords.

Clearly, though, followers of the Abrahamic religions can thank goodness for iron. If not for the presence of mineral deposits that allowed them to forge killing weapons, they might have gone the way of Makkedah and Jericho, and the Jewish and Christian religions might have been stifled or delayed.