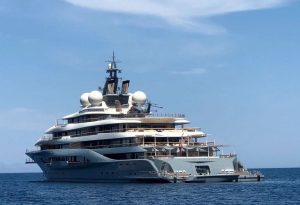 Yo ho, me hearties! A fat ship off the port bow! Roll out the cannons and let the black flag fly!

Soon to be oligarchs without yachts, I hope. The sanctions might be beginning to sting.

BBC understands that some oligarchs sanctioned by the European Union are “shocked” to find their debit cards no longer function, and they are now relying on using cash from safes.

The French acted quickly on Wednesday when customs officers noticed that Mr Sechin’s 88-metre “Amore Vero” – which translates as “true love” – was “taking steps to sail off urgently”.

It arrived in in the Mediterranean port of La Ciotat in January and had been due to stay there while being repaired until 1 April.

Seizing half-billion dollar yachts seems like a fair cop to me. Take ’em all. Although I don’t know what you can do with a seized yacht; they’re rather useless luxuries, expensive to maintain. The lack of utility is the only thing preventing me for getting letters of marque and embarking on a pirate’s life.

Texas Republican Rep. Lance Gooden is expected to roll out a measure Monday that would allow private U.S. citizens to seize yachts, planes or other property belonging to sanctioned Russian citizens amid Russia’s war on Ukraine.

Gooden would do it with legislation requiring President Biden to issue letters of marque and reprisal, an enumerated power of Congress mentioned in Article 1 of the Constitution, which were routinely used during the War of 1812 for Americans to seize property on behalf of the U.S. government, but have not been issued since.

“Putin and his inner circle still have yachts and planes sitting in harbors and airports all over the world,” Gooden told Fox News Digital. “The United States must use every tool at our disposal to seize them and hold Russia accountable for the disgusting invasion of Ukraine. The oligarchs who enabled this crisis are a good place to start.”

Uh, question. I’m see the word “oligarch” all over the place, and it only seems to be applied to Russians. But this is not what “oligarch” means, and it has no obligate connection to Russia.

Oligarchy (from Greek ὀλιγαρχία (oligarkhía); from ὀλίγος (olígos) ‘few’, and ἄρχω (arkho) ‘to rule or to command’)[1][2][3] is a form of power structure in which power rests with a small number of people. These people may or may not be distinguished by one or several characteristics, such as nobility, fame, wealth, education, or corporate, religious, political, or military control.

I’m all for privateers boarding and taking over yachts (preferable debarking the passengers and crew safely somewhere), but I don’t like that everyone seems to think it’s specifically a Russian thing. America has oligarchs.

You know, Jeff Bezos bought a yacht to accompany his super-yacht. His super-yacht is so big that he pressured a Dutch city to dismantle a historic bridge so he can get it out of the shipyard.

The Amazon founder’s 417-foot-long, three-masted ship that cost’s roughly $500 million is under construction in the Netherlands, but the pleasure boat will be too tall to pass under Rotterdam’s landmark Koningshaven Bridge, which has a 130-foot clearance, according to the NL Times, which cited Dutch-language outlet Rijnmond.

As a work-around, the megabillionaire and the boatmaker Oceano reportedly asked Rotterdam officials to temporarily dismantle the iconic bridge, and pledged to reimburse the city for expenses.

Taking apart and reassembling the middle section of the bridge known locally as “De Hef” was expected to take more than two weeks, the paper said. Rotterdam officials touted Bezos’ pet project as a revenue generator.

The citizens of Rotterdam have suggested an entirely inappropriate response.

The city has not yet signed off on any bridge construction, but according to Jalopnik, some aggrieved residents are ready to take matters into their own hands. “Rotterdam was built from the rubble by Rotterdammers and we don’t just take it apart for the phallus symbol of a megalomaniac billionaire. Not without a fight,” reads a Facebook post calling for protesters to throw their old eggs at the boat as it sails by (per Jalopnik’s translation.)

No. Just no. This is a terrible idea. Don’t throw rotten eggs at the boat. Instead, organize boarding parties, storm the dock, take control of the boat, throw the crew overboard, and set sail for the South Pacific. If Bezos is aboard at the time, even better: make him walk the plank.

No pity for oligarchs!

We didn’t “come from rocks,” Matt Powell’s brain is just an example of convergent evolution » « You’re doing it wrong if you’re inspired by Texas