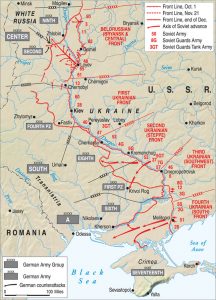 The front lines in the vicinity of Kiev and across Ukraine shifted back and forth during the bitter fighting for control of the Ukrainian capital city in the waning months of 1943.

Listen to this guy. He compares Ukraine to Afghanistan & Iraq by suggesting that, unlike those middle-eastern countries, Ukraine is “civilized” and hasn’t known “decades of war”.

– Iraqis and Syrians watching the news,sympathizing with Ukrainians minding their own business: sigh..so sad

– Unqualified and shameless American reporter: Iraq and Syria are uncivilized and not white so they don't matter

Iraq: the cradle of civilization. A modern nation before the US bombed it to hell.

Ukraine: They’ve been fighting Russia for 8 years. Multiple, massive tank battles were fought there in WWII. Kiev (the old name) was occupied by Nazis for 3 years. Ever hear of Babi Yar? I think Ukrainians have experienced a few atrocities, and have fought back bravely.

Maybe he should have simply said what he was thinking: Ukrainians are white, Iraqis are brown.