This is what journalists were supposed to do, I thought. At least this one time, one confronts a liar for Putin with the evidence.

A devastatingly effective, fair and fact based interview by an Irish journalist with Russian’s ambassador to Ireland. “Why should our government entertain your presence here when you’re acting as an apologist for slaughter.” pic.twitter.com/nKa3m7MoAh

You know, this is exactly what I wanted journalists to do to American politicians when we invaded Iraq. We didn’t get much of it. Instead, we got polarization driving people to Fox News, that nest of lies. And now Fox News is demonstrating that they always were a propaganda mill for conservative authoritarians — could you imagine Tucker Carlson doing anything but fawning over a Russian ambassador making excuses for atrocities?

The Irish people are also protesting outside the Russian embassy, while Irish political parties are calling for the expulsion of the Russian ambassador (although the EU is asking to keep embassies in place, which makes sense if there is to be any hope of a diplomatic solution –– a forlorn hope, but I guess it’s there.) 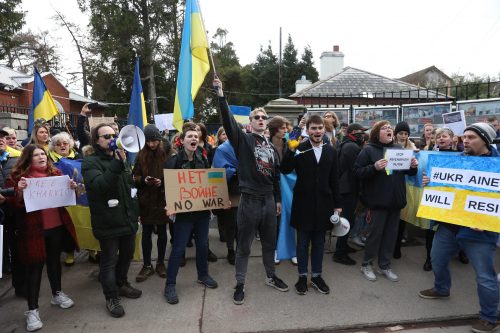